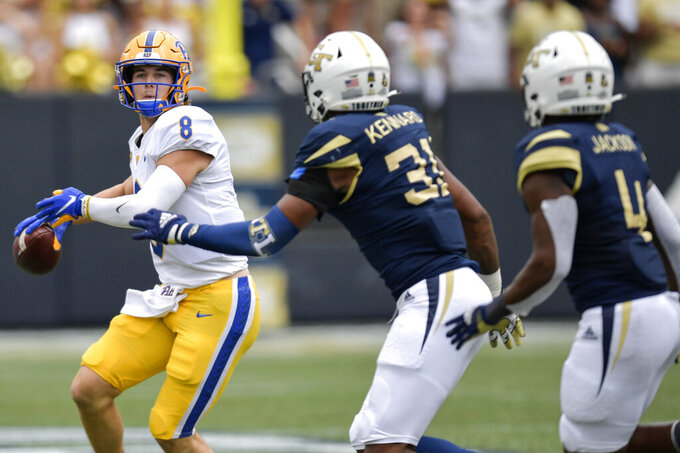 Here are things to watch in the Atlantic Coast Conference in Week 7:

Pittsburgh at Virginia Tech. The only teams still unbeaten on the Coastal Division side of the Atlantic Coast Conference standings battle for an upper hand going forward. Pitt (4-1, 1-0), coming off a bye, leads the nation in scoring (52.4 ppg), is third in total offense (554.4 ypg) and fourth in passing offense (389 ypg). Virginia Tech (3-2, 1-0) is coming off a heartbreaking 32-29 loss to No. 14 Notre Dame and begins a stretch of seven consecutive weeks facing league opponents. The Panthers won last year's matchup, 47-14, at home, but were blanked 28-0 when they visited the Hokies' Lane Stadium in 2019.

Duke's balanced offense vs. Virginia's prolific passing game. The two units averaging the most yards in the conference get there different ways. Virginia (4-2, 2-2) leads with a 523.83 average, but gets 412 of those per game through the air. The Blue Devils (3-3, 0-2) haven't been as prolific offensively since beginning league play, but still average 495.83 yards. They get 277.5 of those through the air and 218.33 on the ground. Virginia averages 113 rushing yards.

Syracuse may be playing at home on Friday night, but with Clemson coming off a bye and having dropped out of the Top 25, expect Dabo Swinney's team to look mighty motivated to get turned around in prime time. Plus, there's history. The Orange stunned the defending national champion Tigers in 2017 at the Carrier Dome, 27-24, then led into the final minute before falling 27-23 in Death Valley the following year. The last two games haven't been close.

Former ACC quarterbacks are quite prevalent, and successful, in the NFL, and some still toiling at the college level surely are drawing high-level attention. Sam Howell of North Carolina entered the season on some Heisman Trophy watch lists, but the Tar Heels are 3-3 and Howell's numbers don't compare to Pitt's Kenny Pickett. He leads the nation's highest scoring offense, averaging 54.2 points, and is throwing for an average of 346 yards per game, with 19 touchdowns and one interception through five games. He has had three straight games with at least four passing TDs, the first league player since Russell Wilson did it for N.C. State in 2009. But Pickett's not leading the ACC in yardage. That would be Virginia's Brennan Armstrong, who averages 410 yards per game and has 17 touchdowns and six interceptions. He's had four 400-yard games, including an ACC record 554 yards against the Tar Heels in a 59-39 loss on Sept. 18. In the Cavaliers' history before this season, quarterbacks had thrown for 400 yards just three times.

If Syracuse hopes to pull an upset when it hosts Clemson, figure on RB Sean Tucker to be a big part of the reason why. The second-year back leads the ACC with averages of 165.8 total yards, 131.8 rushing yards and also tops the conference with 11 touchdowns. The Tigers, meanwhile, rank third in the league, allowing just over 102 rushing yards per game with a long gainer of 27 yards. Tucker has had at least three runs at least that long, with a 56-yarder against Albany.