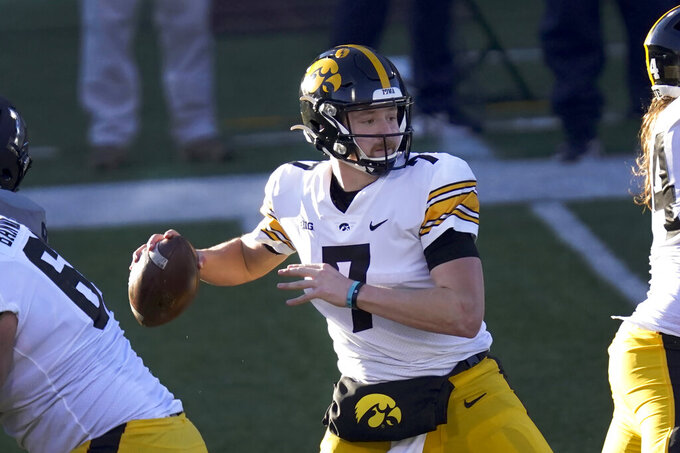 IOWA CITY, Iowa (AP) — The way its schedule sets up, Iowa is going to learn a lot about itself the next two weeks.

The 18th-ranked Hawkeyes open with back-to-back ranked opponents for the first time since 1974. Up first is No. 17 Indiana on Saturday at Kinnick Stadium, and then it's a visit to No. 7 Iowa State for the CyHawk Game.

“The emotions of it are mostly excitement, to open up with those teams,” quarterback Spencer Petras said Tuesday. “You can’t ask for a better opportunity, to open up the 2021 season at home against a ranked opponent. It’s an opportunity to show what we can do.”

The Hawkeyes are looking for a better start than in the pandemic-shortened 2020 season, when they lost their first two games.

“It’s definitely been something that’s been brought up, how we started 0-2,” center Tyler Linderbaum said. “It’s something that can’t happen this year.”

Turnovers were the culprit early in the eight-game conference-only schedule. Iowa lost two fumbles in a 24-20 loss to Purdue and Petras threw three interceptions in a 21-20 defeat to Northwestern. The Hawkeyes recovered, winning their final six games.

“We fell short the first two games last year,” tight end Sam LaPorta said. “We lost by a combined four points, five points. It’s just little details. There are maybe four or five plays that can change a game, and you don’t know they’re happening. You turn on the film on Sundays, and you know those are the game-changing plays. We had a couple of those last year, and it’s why we have to be on point on every snap.”

It’s why, Linderbaum said, there has been discussion of how the Hawkeyes started last year, if only as a reminder to be as sharp as possible right away.

“The goal was just to clean things up, in practice and in the offseason,” Linderbaum said.

Iowa has won seven of its last eight games against Indiana, including a three-game winning streak. The Hawkeyes have won six of the last seven against Iowa State, including the last five.

The Hawkeyes and Hoosiers are meeting as ranked teams for only the second time in series history. Iowa was No. 10 and Indiana was No. 25 in the 1991 game, won by the Hawkeyes, 38-21.

This will be the first time since 1980 that Iowa has opened against a Big Ten opponent. The Hawkeyes typically start off with a game against a Group of Five or FCS program.

“It’s unique in that it’s different than years past," Petras said. "But yeah, I like it.”

Ferentz said he hopes his players always operate with a sense of urgency regardless of the opponent.

“I think the reality is we all realize there’s not a lot of wiggle room this week,” he said. "And we’ve known that starting with spring practice back at the end of March. So we’ll find out.”