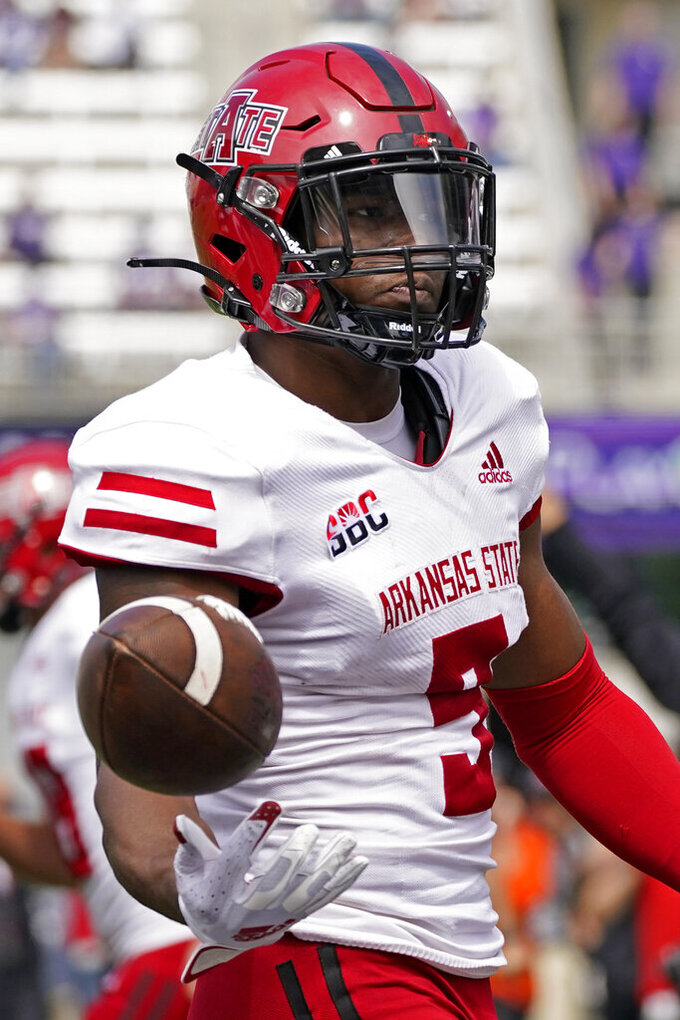 —Jonathan Adams Jr., Arkansas State, caught a career-high three TD passes, including the winner with 38 seconds remaining, and the Red Wolves beat Kansas State 35-31 for their first win over a Power 5 opponent in a dozen years.

—Spencer Rattler, Oklahoma, threw for 290 yards and four TDs in his first start and the No. 5 Sooners rolled past Missouri State 48-0.

—Sam Ehlinger, Texas, passed for 426 yards a career-high five TDs in the first half and the No. 14 Longhorns rolled over UTEP 59-3.

—Alan Bowman, Texas Tech, threw for 430 yards and two TDs and Texas Tech stopped FCS team Houston Baptist on a 2-point conversion attempt late in the fourth quarter, hanging on for a 35-33 victory.

—Trevor Lawrence, Clemson, threw for 351 yards and combined for three touchdowns, and the No. 1 Tigers continued their domination of Wake Forest with a 37-13 victory

—Kenny Pickett, Pittsburgh, threw a for 277 yards and TD and ran for another as the Panthers raced to a 55-0 victory over Austin Peay.

—Jarrett Doege, West Virginia, threw for 228 yards and three TDs in one half to help the Mountaineers beat Eastern Kentucky 56-10.

Perseverance, confidence and two long kick returns propelled Louisiana-Lafayette to one of its biggest wins in program history, 31-14 win over No. 23 Iowa State.

The Ragin’ Cajuns beat a Top 25 opponent on the road for the first time, having gone 0-26 against ranked foes away from home. Their only other win over a Top 25 team was in 1996 at home against Texas A&M.

Both offenses seemed overmatched at times, but the Ragin’ Cajuns were ignited by Chris Smith’s 95-yard kickoff return in the second quarter and Eric Garror’s 83-yard punt return in the fourth.

Lewis passed for 154 yards and contributed to a business-like approach by the Ragin’ Cajuns, who didn’t celebrate much on the field after the game.

Trevor Lawrence and top-ranked Clemson racked up another dominating win against Wake Forest.

Lawrence threw for 351 yards and combined for three touchdowns, and No. 1 Clemson continued its dominance over Wake Forest with a 37-13 victory night in the season opener for both teams.

Trevor Etienne ran for 102 yards and a touchdown for Clemson, which improved to 70-5 since the start of the 2015 season under coach Dabo Swinney.

32_Years since a Kansas State true freshman scored in a season opener before Duece Vaughn against Arkansas State.

97—Yards of a kickoff return by Charlotte's Aaron McAllister against Appalachian State to set a school record.