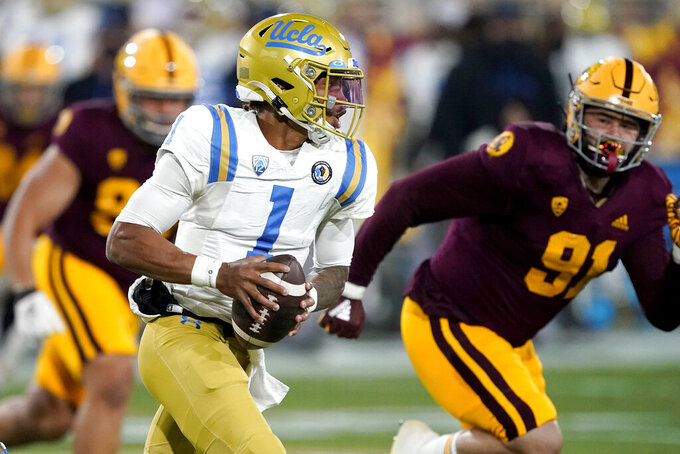 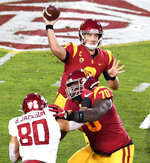 LOS ANGELES (AP) — Southern California's Kedon Slovis carved out his own place in the rivalry with UCLA with a school-record 515 passing yards last year.

He had a slow start to this abbreviated season but has started to gain momentum going into Saturday's 90th edition of the Crosstown Showdown at the Rose Bowl.

The sophomore threw for 287 yards and a career-high five touchdowns in Sunday's 38-13 win over Washington State, giving the 16th-ranked Trojans their second 4-0 start since 2017. A USC win this week would not only allow the Trojans to retain possession of the Victory Bell, but it would wrap up the Pac-12 South Division and allow them to host next week's conference title game.

“It’s always exciting to play against a rival team,” Slovis said. “We're coming in with confidence. We're not pressing and not trying to play perfect. Guys have had a lot of energy.”

The Trojans will face a much-improved UCLA defense. The Bruins had the second-worst pass defense out of 130 Football Bowl Subdivision teams last season but have catapulted to 61st this year. They are eighth nationally in sacks per game (3.6) and 16th in tackles for loss per game (7.8).

The defense is a huge reason the Bruins (3-2) are over .500 for the first time in Chip Kelly's three-year tenure in Westwood.

“What he did last year as a freshman was pretty special, and he has kind of picked up where he left off,” Kelly said of Slovis. “You always have to mix it up because he’s just such a good quarterback. Sometimes you have to be able to rush three and drop eight, and other times you have to be able to rush more than they have in protection and see if you can get the ball out quick.”

Besides spoiling the Trojans' conference title hopes, a win would put the Bruins in position to reach a bowl game.

With Slovis' record performance, many forget that UCLA's Dorian Thompson-Robinson also played well in last year's matchup. He accounted for 431 yards of total offense and four touchdowns in the 52-35 loss.

The junior is averaging 300.3 yards of offense this season, but is not among the conference leaders because he missed two games due to COVID-19 contact tracing. He returned for last week's game against Arizona State and had 241 yards (192 passing, 49 rushing) along with a touchdown rushing and passing.

“He’s probably the best creator in our league. When bad plays happen, he finds a way to make them great," USC coach Clay Helton said. "He’s creating 300 yards of offense every time he steps onto the field. He's hard to play against, but fun to watch.”

USC had a run where it won 10 of 11 against its rival, but the teams have split the last eight meetings. Kelly's most significant win at UCLA came two years ago against the Trojans as Joshua Kelley ran for 289 yards in a 34-27 victory.

Saturday's meeting will be the latest the two schools have met in football since 1942.

UCLA senior running back Demetric Felton is 12th nationally at 115.6 yards per game and leads a Bruins rushing attack that has gone over 200 yards in eight of their last 13 games. USC's Talanoa Hufanga is one of the nation's top safeties, but he moved to linebacker last week and had a team-high nine tackles, a sack and an interception.

USC wide receiver Amon-Ra St. Brown. The junior tied a NCAA record with four first-quarter touchdowns against Washington State and has had big days against the Bruins. St. Brown has 14 receptions for 226 yards and a touchdown in two games against UCLA and was one of four receivers to have a 100-yard game last year.