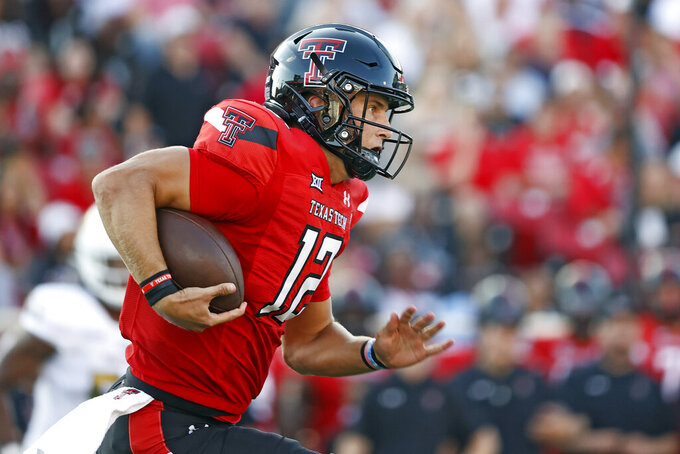 Texas Tech's Tyler Shough (12) runs with the ball during the first half of an NCAA college football game against Florida International, Saturday, Sept. 18, 2021, in Lubbock, Texas. (AP Photo/Brad Tollefson)

AUSTIN, Texas (AP) — The first Big 12 game of the season for Texas and Texas Tech already feels like a pivotal moment for both head coaches.

First-year Texas coach Steve Sarkisian was brought in from Nick Saban's staff at Alabama with a $34 million guaranteed contract and a promise to elevate the program back to the Big 12 power. His first national game two weeks ago was a disaster, a 40-21 drubbing by Arkansas that wasn't as close as the final score.

Texas Tech coach Matt Well is in his third season and the Red Raiders' 3-0 start is promising after 4-8 and 4-6 finishes the last two years.

“I wasn't here the last decade, you know?” Sarkisian said. “I pay attention to what has happened, but the reality is I try to be where my feet are. Now my feet are here at Texas ... We're not here to make up for the past. We're here to do the best job that we can do this season."

Sarkisian knows the Longhorns didn't impress anyone who watched the loss at Arkansas that dropped them from No. 15 to unranked. And Saturday starts the Longhorns' first trip around the Big 12 since the announcement the school will move to the Southeastern Conference in the future.

Patience in the Wells regime may well be running short in Lubbock after two losing season. Winning at Texas before the Longhorns leave the Big 12 would be a huge boost for coach and program.

“It would be a big win, there's no question about that. There's a lot of particular feelings around Lubbock and West Texas I think in terms of this game,” Wells said. “I know this, we have a belief in ourselves.”

Casey Thompson was good in his starting debut against Rice but frankly wasn't asked to do much in a 58-0 rout. His only mistake came on an interception when he was hit on a blitz. Dating to last season's Alamo Bowl, Thompson has led Texas to points on 16 of the 18 possessions he's been on the field.

Oregon transfer Tyler Shough has taken charge of the Red Raiders offense. He passed for 399 and four touchdowns last week in a win over Florida International.

The Texas secondary will be tested often by Red Raiders receiver Erik Ezukanma. He leads the Big 12 in total receiving yards (350) and yards per game (116.7).

Texas freshman Xavier Worthy is rail thin at 6-foot-1, 160 pounds, but had a breakout game last week with seven catches for 88 yards and his first career touchdown. Quiet so far has been Texas' Joshua Moore. The Longhorns' leading returning receiver from last season has just four catches and no touchdowns yet. He caught the game-winner in overtime in Lubbock last season.

Texas Tech ranks second in the Big 12 in rushing yards allowed at just 54.3 per game. The Red Raiders should be much tougher at the line of scrimmage against Texas than Rice was.

Texas Tech has been creating them in bunches and turning them into big plays. The Red Raiders had four interceptions in their season-opener against Houston, and had a 72-yard scoring return last week against Florida International. They have two defensive touchdowns off turnovers.

Five of the last six matchups in this rivalry have been decided by a touchdown or less. Last season, the Longhorns rallied with two touchdowns in the final three minutes before winning in overtime.