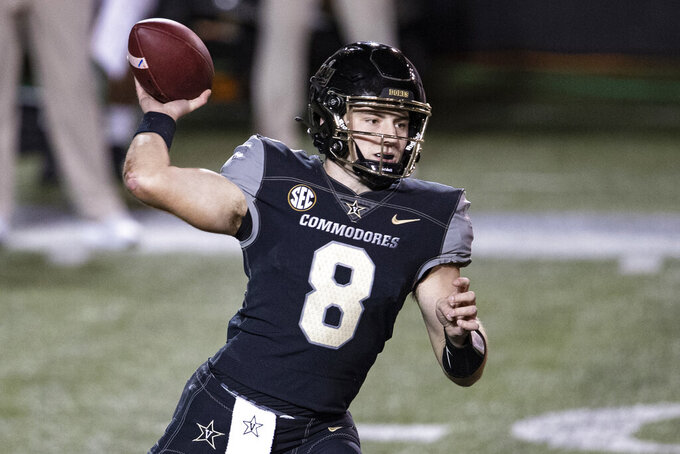 They also get a chance to end a 10-game skid that started the week after beating East Tennessee State in November 2019, the very same team Vanderbilt hosts to open this season.

“The players are ecstatic,” Lea said. “They feel like they’ve been working hard over the past eight months to get to this point and to be finally here is quite the moment. The staff’s ecstatic, too. We’ve worked hard with these guys to build them to this moment, and yet this will just be Game 1."

Lea is trying to build his alma mater into the contender he believes the Commodores can be. He'll have to wait until later this season to snap the program's 13-game Southeastern Conference skid.

“We’re all just itching to get out there," said Lea, one of 10 coaches at their alma maters this season. "And so it’ll be surreal as kind of those gold helmets are lined up in the in the tunnel.”

Vanderbilt routed East Tennessee State 38-0 on Nov. 23, 2019. The Bucs of the Southern Conference in the Football Championship Subdivision went 4-2 this spring with two games canceled. Coach Randy Sanders has had to prepare to face Vanderbilt with little from the past season to study.

“There are a lot of new faces on their roster,” Sanders said. “However, it is the opening game so I am sure that they still have a few questions about what they are going to see out of us. It is a typical opening game and you have to make adjustments.”

Lea brought David Raih in from the NFL to run Vanderbilt's offense. Ken Seals has been named the starting quarterback with backup Mike Wright expected to play as well counted as one of the Commodores' best 11 offensive players by Lea.

Seals has four of his five top receivers back led by senior Amir Abdur-Rahman. Ra'Mahn Davis, a transfer who played 16 games at Temple in 2019 and 2020, is at the top of the depth chart at running back after he ran 271 times for 1,259 yards and nine touchdowns.

The Bucs are just 6-24 away from Johnson City since the football program was restarted in 2015. They've had one season with a winning road record, and that was this spring as they went 2-1. They've gone winless on the road three times since 2015.

The Commodores return their top six tacklers from last season led by junior linebacker Anfernee Orji. But the group features a revamped defensive line after losing Dayo Odeyingbo to the NFL's Indianapolis Colts as a second-round draft pick. The new starters are Daevion Davis, Nate Clifton and senior Malik Langham.

BACK FOR EIGHTH YEAR

ETSU linebacker Jared Folks is apparently the first player ever to be granted an eighth year of eligibility by the NCAA. Folks, 25, spent four years with Temple before transferring to ETSU for what was expected to be a final year of football. Medical and redshirt seasons approved by the NCAA now have the Bucs' leading tackler back as a preseason All-Southern Conference pick.