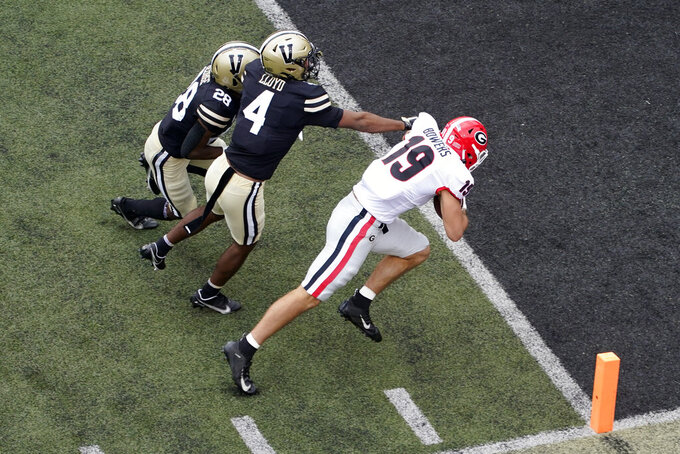 Georgia tight end Brock Bowers (19) scores his second touchdown of the game as he gets past Vanderbilt defenders Chase Lloyd (4) and Allan George (28) in the first half of an NCAA college football game Saturday, Sept. 25, 2021, in Nashville, Tenn. (AP Photo/Mark Humphrey)

NASHVILLE, Tenn. (AP) — The Vanderbilt Commodores and UConn Huskies are both working through rebuilding efforts and adversity while trying to win games.

On Saturday night, first-year coach Clark Lea and his Commodores have what might be their best chance at a victory this season.

If Lea can get them refocused after a painful 62-0 loss to No. 2 Georgia.

“This is where our program is,” Lea said. “This is how we measured against Georgia on Saturday. Now let's figure out how we can evolve through this. ... Let's make it a galvanizing experience so that we can again put our best effort on display Saturday against UConn.”

After this game, Vanderbilt (1-3) finishes the season against Southeastern Conference opponents and the Commodores have lost 14 straight league games. They snapped an 11-game skid in their second game of the season, beating Colorado State on the road. But this program also has lost eight straight at home dating to a win Nov. 23, 2019 over ETSU.

At least Lea has a coaching victory.

The winless Huskies (0-5) saw coach Randy Edsall first announce plans to retire after the season before leaving immediately Sept. 6. Edsall was just 6-32 in his second stint with the Huskies.

Interim head coach Lou Spanos is coming off UConn's closest loss this season, 24-22 to Wyoming. He sees a changing culture.

“Now, is there room for improvement? Most definitely,” Spanos said. "But, we’re coming together as a team. They are playing for each other and they’re working hard. They are putting work in to get right on game day.”

Lea knew he was walking into a rebuild at his alma mater. His first season at fullback was 2002 when Vanderbilt first played UConn, a game the Commodores won 28-24 with Jay Cutler at quarterback.

The first-year coach saw plenty of progress until the season kicked off. Now, he and his assistants are busy coaching and trying to build up the players at the same time.

UConn’s losses have come to 3-1 Holy Cross from the FCS, a result that led to Edsall's early retirement, and four bowl subdivision teams. Those schools, Fresno State, Purdue, Army and Wyoming are a combined 15-2. The Huskies lost their first four games by a total score of 184-49.

Vandy also has a loss to an FCS program, East Tennessee State in the season opener.

Ken Seals remains Vanderbilt's starting quarterback with Mike Wright coming in for plays, and series. Both are in their second season with the Commodores, and Lea noted they're in another new offense this year.

Lea wants Seals to relax and slow down a bit more. Seals has more interceptions (four) than touchdowns (three). Wright also is pressing, and Lea wants him to understand he doesn't have to do everything by himself.

UConn freshman quarterback Tyler Phommachanh will be making his third start and says the game is slowing down for him. His name might sound familiar. He’s the younger brother of Clemson’s backup quarterback Taisun Phommachanh.

“We definitely get on the phone,” the younger Phommachanh said. “We talk a lot about things I see, things he sees, and he gives me good information on things that I can learn from and build on.”