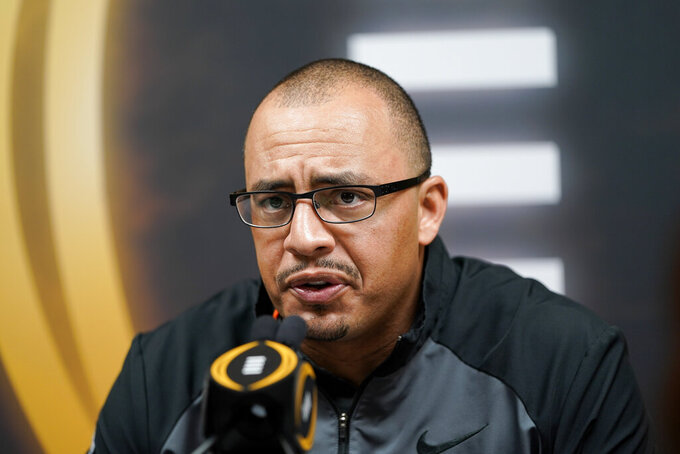 Virginia didn't have to extend its search for a new football coach beyond the Atlantic Coast Conference as the Cavaliers announced Friday they had tabbed longtime Clemson offensive coordinator Tony Elliott to fill their vacancy.

Cavaliers athletic director Carla Williams announced Virginia was hiring Elliott, who will be introduced at a news conference next week. No details of his contract were released though Elliott earned about $2 million a year at Clemson.

“Coach Elliott is a winner, in every sense of the word. He is known for his character, humility, work ethic, skill set and passion for education," Williams said in a release. “Coach Elliott is an exceptional leader of young men and he is highly regarded across college football as a talented teacher and coach. He is an outstanding recruiter who has been responsible for recruiting, signing and developing scholar-athletes while competing for and winning championships.”

Elliott will replace Bronco Mendenhall, who stunned the school on Dec. 2 by announcing he is stepping down after Virginia’s bowl game. In six seasons, Mendenhall has led the Cavaliers to four bowl games — they opted out after last season — and their first ACC championship berth in 2019. Virginia lost 62-17 in that matchup against Elliott and eventual national champion Clemson.

A recipient of the prestigious Frank Broyles Award as the top assistant coach in college football in 2017, Elliott oversaw an offense led by future No. 1 overall NFL draft choice Trevor Lawrence at quarterback and All-American tailback Travis Etienne.

This past season has been less impressive as the Tigers transitioned to sophomore DJ Uiagelelei at quarterback. Clemson finished the regular season ranked 78th nationally in scoring, averaging 26.8 points. They also dropped out of the Top 25 and missed the College Football Playoff for the first time in seven seasons.

Elliott is the Tigers' second coordinator to leave this offseason. Defensive coordinator Brent Venables was hired Sunday as the new head coach at Oklahoma.

The Tigers played for four national championships in the past six years, winning in 2016-17 and 2018-19. Each time they bested previously unbeaten Alabama.

Elliott was a walk-on who played four years at Clemson. Despite modest career numbers of 34 catches for 455 yards and two touchdowns, he was voted a team captain his senior season while all winning All-ACC academic honors.