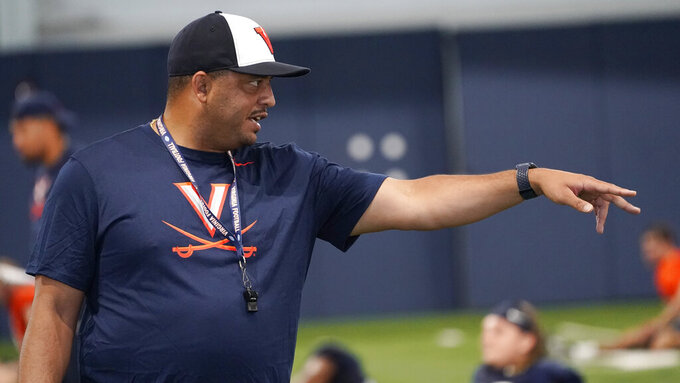 The Cavaliers begin the Tony Elliott era hoping to get off to a better start than the Bronco Mendenhall era did. That began with a 37-20 loss to Richmond at home in 2016. The Spiders get a payday, and a chance to spoil the Elliott debut.

Richmond: KR-RB Aaron Dykes. Special teams play can be huge in a matchup of FCS and FBS schools, and Dykes has returned three kickoffs for touchdowns, including two in the first half against Delaware in 2019.

Virginia: WR Lavel Davis. The 6-foot-7 Davis was a freshman sensation in 2020 before missing last season with an injury. He's got long-distance speed and size, joining an already highly accomplished receiving corps for the Cavaliers.

Richmond's last three season-opening road wins have come against Atlantic Coast Conference foes — Duke in 2009 and 2011 and Virginia in 2016. ... Before 2016, the Spiders had not beaten the Cavaliers since 1946 in Richmond. ... Virginia QB Brennan Armstrong set an ACC record with 404.5 yards per game last season. No other QB in the history of the conference averaged more than 350 yards per game in a season. ... The Cavaliers return 89% of their total yardage from last season, when they averaged 515 yards, third in the country, but need to replace their entire offensive line.