What To Watch: Pac-12 takes center stage with two showdowns 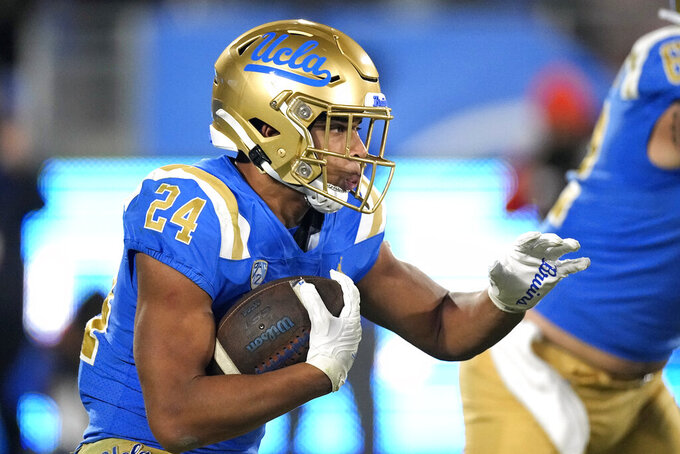 UCLA running back Zach Charbonnet runs the ball during the first half of an NCAA college football game against Arizona Saturday, Nov. 12, 2022, in Pasadena, Calif. (AP Photo/Mark J. Terrill)

Although its chances of ending its College Football Playoff drought have taken a hit lately, the Pac-12 deserves attention this week with two marquee matchups.

Oregon and UCLA were in the top 12 of the CFP and AP rankings before those losses.

The Trojans’ lack of quality wins has kept their ranking down, but they could rectify that with victories over UCLA and No. 18 Notre Dame (No. 18 CFP) before likely facing another ranked team in the Pac-12 championship game.

The Pac-12 hasn’t sent a team to the playoff since Washington made it in 2016.

The What to Watch rundown in college football presented by Regions Bank:

Expect plenty of scoring. The winner of this series has put up at least 34 points in 10 of the last 11 matchups. USC is putting up 42.4 points per game to rank third among all Football Bowl Subdivision teams. UCLA is 11th with 39.5 points per game.

USC’s Caleb Williams has thrown 31 touchdown passes with only two interceptions this season. UCLA’s Zach Charbonnet has run for 1,145 yards and 13 touchdowns while averaging 7.51 yards per carry.

While quarterbacks have dominated the Heisman Trophy discussions all season, Michigan RB Blake Corum has a chance to state his case as the third-ranked Wolverines (No. 3 CFP) face Illinois and No. 2 Ohio State (No. 2 CFP) the next two weeks.

The Michigan-Illinois game features two of the nation’s top running backs in Corum and Chase Brown, who has 1,442 yards, gains 5.2 yards per carry and averages 144.2 per game for the Illini.

Corum has rushed for 1,349 yards while averaging 5.9 yards per carry and 134.9 per game. Corum will be facing an Illinois defense that allows just 3.02 yards per carry to rank fifth nationally.

A victory Saturday at South Carolina would give No. 5 Tennessee (No. 5 CFP) its first season with double-digit wins since 2007. … No. 4 TCU (No. 4 CFP) is the first Big 12 team to start a season 10-0 since Oklahoma State in 2015. That Oklahoma State team lost its last three games by an average margin of 24.3 points to finish 10-3. … Iowa is allowing just 3.81 yards per play. The last FBS team to finish a season allowing a lower average of yards per play was Alabama (3.32) during its 2011 national championship season. … N.C. State’s Christopher Dunn broke the Atlantic Coast Conference record for career field goals last week. Dunn has 89. Dustin Hopkins made 88 for Florida State from 2009-12. Dunn also is a perfect 196 of 196 on extra-point attempts.

The firing of West Virginia athletic director Shane Lyons could mean time is running out for coach Neal Brown, though university president Gordon Gee issued a statement saying that “we are supporting coach Neal Brown and our team as we complete our season over the next few weeks.”

Brown is 21-24 in four seasons and 4-6 this year, though West Virginia is coming off a victory over Oklahoma that snapped the Mountaineers’ nine-game skid in that series.

West Virginia face No. 19 Kansas State and No. 24 Oklahoma State the next two weeks.

The two top teams in the Mountain West Conference’s Mountain Division face off when Wyoming (7-3, 5-1) hosts Boise State (7-3, 6-0). Boise State clinches the division title with a victory. A Wyoming win would put the Cowboys in control of their destiny heading into the final week of the regular season.

Wyoming has won four straight games but is just 1-15 against Boise State. The lone Wyoming victory came in 2016.