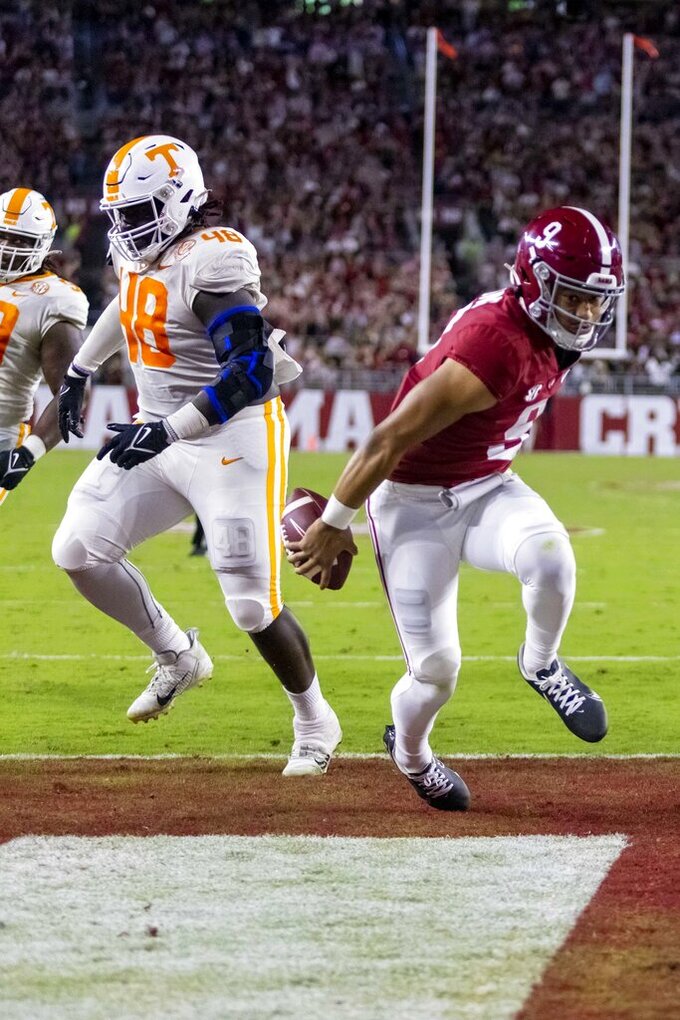 Alabama quarterback Bryce Young (9) runs for a touchdown past Tennessee defensive lineman Ja'Quain Blakely (48) during the first half of an NCAA college football game Saturday, Oct. 23, 2021, in Tuscaloosa, Ala. (AP Photo/Vasha Hunt)

Bryce Young is showing why he arrived at Alabama as the nation’s top dual-threat quarterback.

“He’s really deceptively quick and has a really good burst and moves around very effectively in the pocket,” Alabama coach Nick Saban said. “So he’s not easy to sack.

“That’s been very beneficial to us. I would actually hope that he doesn’t have to do that.”

Saban said they don’t even have designed quarterback runs for Young. But the sophomore ran for his first two career touchdowns in a 52-24 win over Tennessee ahead of Alabama's open date. Next up: LSU on Nov. 6.

Young ran 10 times for 42 yards in the game even counting two sacks. He converted two third downs on the ground and scored on two other third-down plays, making defenders miss in the open field.

“He was real shifty coming out of the backfield,” Alabama tailback Brian Robinson said after the game. “He was just showing his scrambling ability, just showing why he was the No. 1 dual-threat quarterback in his class.

"People were questioning his ability to run and he showed that he can run the ball.”

Young's main weapon of choice remains his right arm. The sophomore passed for 371 yards and two scores against the Volunteers to earn Southeastern Conference offensive player of the week honors.

He's regarded as a +125 Heisman favorite, according to according to FanDuel Sportsbook. It's based on his passing, but opposing defenses have to be wary of the risk of Young's running too.

It's another offensive option along with tailback Brian Robinson and wide receivers John Metchie and Jameson Williams. All three topped 100 yards rushing or receiving against the Volunteers.

Then there's Young's occasional runs and more frequent elusiveness in the backfield. The 6-foot, 194-pounder spent a lot of time scrambling buying time looking for receivers downfield, too.

Young has passed for 2,453 yards and 26 touchdowns against just three interceptions. He's third nationally in touchdown passes, fifth in passing efficiency and 11th in yards per game.

Through the first six games, Young had minus-20 yards on 22 carries courtesy of sacks. He's not leading his team in rushing like No. 10 Mississippi's Matt Corral, but he is in positive territory now.

The 40 net yards doesn't take factor in the timeliness of his few runs. He's a dual threat because he can run not because he does it often.

Young's running has helped Alabama convert 75% of its third down places (27 of 36) over the past two games. Not that Saban wants him to make it too much of a habit.

“And I think it's something that's been very effective for us the last couple of games.”

By Ralph D. Russo 4 minutes ago
an hour ago
By John Fineran 2 hrs ago
By Aaron Beard 2 hrs ago
By The Associated Press 4 hrs ago