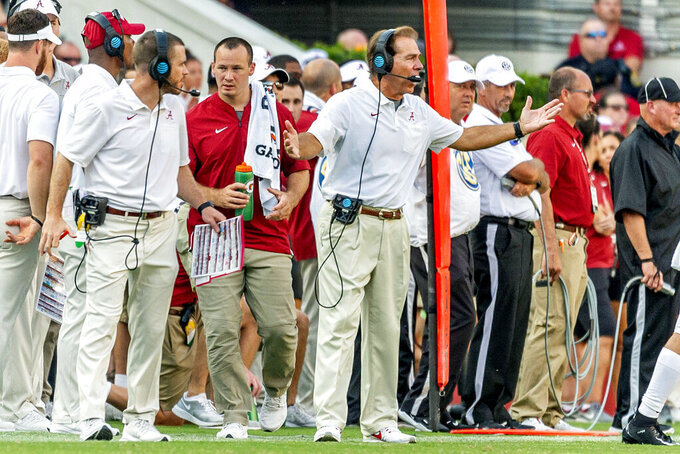 "What I remember from it is we got the lining kicked out of our britches," he said. "I don't know if you know what that means, but that means you get your butt kicked so bad you got no seam in the back of your pants. So, yeah, I remember."

The loss in 2010 also stands out because that 35-21 win by Steve Spurrier's South Carolina team was the last loss the Crimson Tide (2-0) suffered to an SEC Eastern Division club. On Saturday, Alabama will look to continue its 23-game streak against the SEC East since that setback in the season opener for both teams.

Saban brushed aside that anyone on the field, all of them likely in grade or middle school, will recall much of what went on that game. What Saban hopes his players take away from those program memories is to be prepared for anything.

"I know this is a tough place to play and we have a lot of respect for the team we're playing," he said. "I think that the players on our team need to have the proper respect in terms of what they need to do to prepare to play a good team like this."

Those 2010 Gamecocks were led by Spurrier and featured future Super Bowl winners in cornerback Stephon Gilmore and receiver Alshon Jeffrey.

South Carolina (1-1) these days is a sizeable underdog seeking its footing under new quarterback Ryan Hilinski, a freshman forced onto the field by a season-ending injury to four-year starter Jake Bentley.

Hilinski threw for 282 yards and two touchdowns in a 72-10 debut win over FCS Charleston Southern. Gamecocks coach Will Muschamp said his players will have to help Hilinski.

"No different than last week and obviously the opponent is much different, but play well around him," Muschamp said.

Even if that happens, it is unlikely South Carolina can match its feat of nine years ago. Just in case, Saban's taken all the steps to prevent it

Alabama offensive lineman Landon Dickerson said the team discussed the decade-old upset this week, believing the past can help the team from future mistakes.

"So there was a lesson learned there and hopefully we prepare enough so that it doesn't happen again," he said.

Some other things to watch when No. 2 Alabama plays at South Carolina

Alabama is 11-1 in SEC road openers under Saban with the only loss coming at Mississippi in 2014. The Tide is perfect in eight road games that also represented the SEC opener. Alabama is also 11-1 in SEC opening games with Ole Miss in 2015 the only defeat during Saban's time.

The most familiar player with Alabama on South Carolina's roster is tailback Tavien Feaster, the Clemson graduate transfer who played in the past two College Football Playoff games with the Tide. He tells teammates the Tide will be tough, fast and physical, so "give it your best and don't let your guard down," he said.

All-America wide receiver Jerry Jeudy has put up big numbers already for Alabama. The 2018 Biletnikoff Award winner has caught 18 passes for 240 yards and four touchdowns. South Carolina cornerback Jaycee Horn is prepping to go against Jeudy. "As a competitor, you've got to want that matchup," he said.

Alabama has won 84 consecutive games against unranked teams, the longest streak in FBS history. But the last loss in that scenario did come in an SEC game, against Auburn in 2007.