Amid Miami-FSU week, Diaz reveals a tie that binds programs 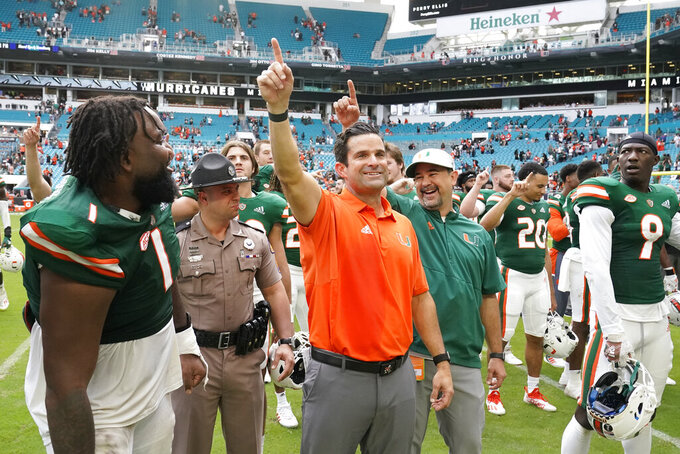 CORAL GABLES, Fla. (AP) — It has been a tradition at Miami for at least a few years.

Every football staff meeting begins with what Hurricanes coach Manny Diaz described as a devotional. They're sometimes spiritual, sometimes motivational, always designed to remind those hearing the words that there is more to life than just the game.

And, as Diaz revealed Monday, it's a tradition that traces back to Bobby Bowden.

It's rivalry week for Miami and Florida State, with the Hurricanes (5-4, 3-2 Atlantic Coast Conference) set to visit the Seminoles (3-6, 2-4) in Tallahassee, Florida, on Saturday. There will be copious amounts of trash talk, the sound of the hits on the field might pop a bit louder than usual, and the winning side will absolutely let the losing side hear nonstop about the outcome until whenever the sides play again in 2022.

“That respect has always been there," Diaz said. “But obviously, when the ball kicks off, it's going to be as an intensely fought game as we've had all year."

It's the second time that teams coached by Diaz and Florida State's Mike Norvell will meet in the rivalry — but the first time the two coaches will actually face off. Norvell wasn't able to attend last season's game in Miami Gardens, Florida, because of virus-related issues, and had to watch from home as the Hurricanes rolled to a 52-10 victory.

“Excited for the week," Norvell said Monday. “Miami week, it’s the greatest tradition, one of the greatest rivalries and traditional games in all of college football. For us, it’s a lot of excitement within the program for the week that’s ahead. ... I'm excited about this game, I'm excited about being a part of this game. You come to Florida State and the first thing you think about are those games."

There will also be thoughts about the coaches who made this a true rivalry.

Bowden died earlier this year, as did former Miami coach Howard Schnellenberger — who guided the Hurricanes to the first of their five national championships. They are considered godfathers of their programs, godfathers of college football in the state of Florida.

Bowden and Schnellenberger were close friends, and their showmanship in the early years of what is now the full-blown rivalry paid off. They posed for an infamous photo in a boxing ring in 1983, both in jackets and ties and boxing gloves. The Hurricanes won the national championship that season, the start of a run in which either Miami or Florida State won the title seven times in a span of 19 seasons.

“I’ve always felt like there’s been a competitive respect between the programs," Diaz said. “Not just because of the nature of the games and the great games through the years and how somebody winning a game or losing a game on a field goal just going 6 inches to the right determined maybe who won the national championship that year ... they rose up together."