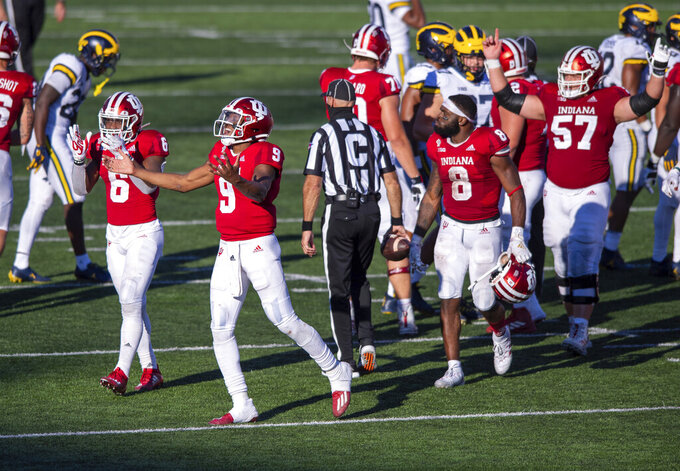 Conventional wisdom heading into this college football season has been that there is unlikely to be much coaching turnover.

Between pandemic-related revenue losses and the complications of trying to evaluate performance under such unusual circumstances, the coaching carousel figured to be quiet.

Then Michigan started 1-2 in its sixth season under coach Jim Harbaugh. The 23rd-ranked Wolverines — yes, they were still ranked — lost 38-21 at No. 13 Indiana on Saturday, snapping a 24-game winning streak against the Hoosiers that dated to 1987.

Harbaugh has only one more season left after this on his original contract, which has made him one of the highest-paid head coaches in college football.

The khaki-clad former Wolverines quarterback returned to Ann Arbor as a savior, made Michigan better, became a content machine for sports media and lost all five games vs. Ohio State. Whatever shortcomings Harbaugh has had at Michigan, his teams have never won fewer than eight regular-season games and rarely lost to the opponents Michigan is supposed to beat.

“You’re playing good teams every week," Harbaugh said. "We’ve got to get there fast.”

The Big Ten is such a mess there is probably a path to a respectable season for Michigan, but it's pretty clear the program is trending in the wrong direction.

Firing Harbaugh after a truncated and odd season does not seem like the Michigan way. The more interesting question at this point: Does Harbaugh want to do this anymore? His contract situation is unheard of in college football, where schools are more likely to rush into a bad extension than let a winning coach get close to walk year.

It's difficult to forecast where this could be going, but a scenario in which Harbaugh decides he has done all he can do with the job and moves on without hurting Michigan financially seems plausible.

If the Michigan job opens up, it is liable to knock over a few dominos.

Is an Ohio State man what Michigan needs? Former Buckeyes player and assistant coach Luke Fickell has No. 6 Cincinnati looking like a legitimate playoff contender. He turned down the Michigan State job when it opened unusually late in the cycle. The better question is: Would Fickell betray his roots to coach the School up North?

The most obvious solution for Michigan might be in the Big 12. Iowa State's Matt Campbell's overall record (30-27 with the Cyclones) might not be enough to impress Michigan fans, but he is having uncommon success in Ames.

What has become apparent is the coronavirus pandemic is not going to cause the coaching carousel to come to a halt. Already Southern Mississippi and Utah State — as of Saturday — are in the market.

Things are not trending in a good direction for Derek Mason at Vanderbilt. Same goes for South Carolina's Will Muschamp.

Another one to keep an eye on is Virginia Tech. Justin Fuente's dalliance with Baylor after last season did not sit well in Blacksburg. A good season for the Hokies could have calmed the situation. Instead, Virginia Tech is 4-3 after Fuente and his staff botched the end of a home loss to No. 25 Liberty and Hugh Freeze.

In a normal offseason, Freeze would almost certainly be bouncing to a bigger program — even with all his baggage — after what he has done with the Flames.

Just how silly this silly season gets, though, will be determined by Michigan and Harbaugh.

CLEAR PATH TO A PLAYOFF

No. 4 Notre Dame's victory against No. 1 Clemson seems to set both teams on a pretty clear path to the College Football Playoff if they can take care of business in the regular season.

Losing without QB Trevor Lawrence and three other key starters helps build on some leeway for the Tigers.

But Clemson with DJ Uiagalelei is still one of the best teams in the country. Amazingly, the Tigers' backup is probably a top-five quarterback in college football.

Who gets in over Clemson and Notre Dame after an ACC championship game rematch won by the Tigers that puts both them and the Irish at 11-1?

No. 14 Oklahoma State with only one loss? Maybe, but the Cowboys don't look like a team that can run the table. Especially with Oklahoma still to come.

An undefeated Pac-12 champion? No. 12 Oregon looked good out of the gate.

It would be fun to see Zach Wilson and No. 9 BYU or Cincinnati get the opportunity, but they're not bumping out the Irish or Tigers.

Texas A&M could put forth an interesting case if it wins out to finish 9-1. And if Florida could knock off an unbeaten Alabama in the SEC championship, now you'd have a really interesting debate.

But for now, the most likely scenario is Alabama, Ohio State and the two ACC teams.

AROUND THE COUNTRY: The Pac-12 canceled two games before it played one. Not a great sign, but the conference launched with exactly what it hoped to get out of its breakfast time kickoff in Los Angeles. No. 20 USC's late rally against Arizona State in Fox's noon window was one of the games of the day. And the presidential race was called early enough so that the broadcast was not interrupted by the day's big names ... But later, more tough news out of the Pac-12. Before its prime-time marquee game of the day, Stanford announced quarterback Davis Mills would not play against Oregon because of COVID-19 protocols. ... The recruiting machine is still pumping talent into No. 5 Georgia at a high rate,e but Bulldogs fans have to be lamenting a lost season after their team get thumped by No. 8 Florida. What could have been for Georgia with a normal offseason and Jamie Newman at quarterback? ... Current state of the Big Ten: Penn State, Michigan and Nebraska are a combined 1-7. Indiana, Northwestern and Purdue are 8-0. .. If Indiana can beat Michigan State next week, the Hoosiers will match a school record with five consecutive Big Ten victories and set up a huge East Division matchup at No. 3 Ohio State on Nov. 21. Strange season. ... Keeping players engaged during this strange season could be challenging for coaches. Penn State getting drubbed at home by Maryland might be Exhibit A. ... Ohio State's Justin Fields has thrown 11 incomplete passes and 11 touchdown passes this season.