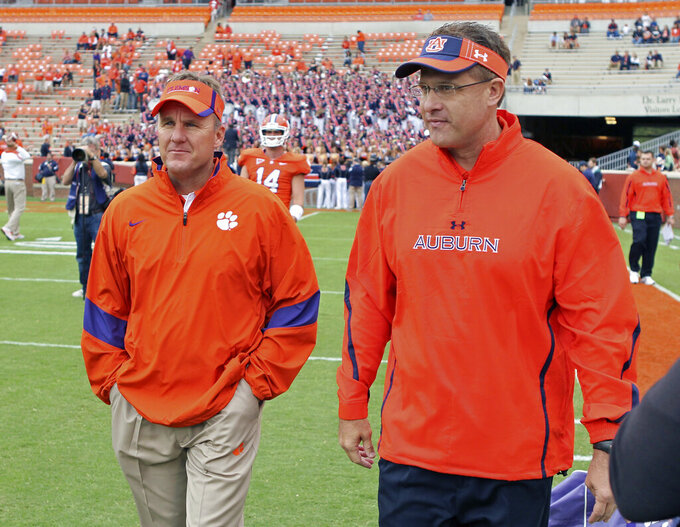 FILE - In this Sept. 17, 2011, file photo, then-offensive coordinators Chad Morris, left, of Clemson, and Gus Malzahn, right, of Auburn, walk together on the field at Memorial Stadium before an NCAA college football game, in Clemson, S.C. Morris is now the head coach at Arkansas. Malzahn is the head coach at Auburn. The two chat each week _ except when they play each other. (Mark Crammer/The Independent-Mail via AP, File)

FAYETTEVILLE, Ark. (AP) — Like most football players who grew up in Arkansas, Gus Malzahn dreamed about wearing the cardinal helmet with the running Razorback on the side.

As a star at Fort Smith Christian School, Malzahn walked on at Arkansas in the early 1980s, but eventually left Fayetteville for Arkadelphia and finished his college career at Henderson State.

His coaching career has been almost a carbon copy. Malzahn's first college coaching job was as the offensive coordinator at Arkansas following a highly successful career as a prep coach in neighboring Springdale, first at Shiloh Christian and then at Springdale High.

Malzahn returns home Saturday as the coach at No. 11 Auburn, but he'll put his feelings aside and try to beat the Razorbacks for the sixth time in seven meetings.

Arkansas coach Chad Morris considers Malzahn a friend. The two have a connection going back to when they were both high school coaches — Malzahn in Arkansas and Morris in Texas.

"We've coached against each other," Malzahn said this week on a conference call. "I have a lot of respect for him. He's an outstanding coach and an outstanding person. This week we really won't talk until we get to the game. I root for him every game but this one, and I think he does the same. I'm proud of him wherever he coaches. We are two high school coaches coaching in the SEC. I've always been proud of him."

While Malzahn has found success at the college level, helping Auburn (5-1, 2-1 Southeastern Conference) with a national championship as an offensive coordinator and then leading the Tigers back to the championship game as head coach, the story has been much different for Morris, who is 4-14 in his second season at Arkansas (2-4, 0-3) after being hired from SMU in December 2017.

Malzahn's Tigers are favored by almost three touchdowns for the 11 a.m. kickoff, but he is not taking anything for granted after losing to Florida two weeks ago.

"We're talking about a team where the last two games they had really good opportunities to win," Malzahn said of Arkansas. "They're playing extremely hard. I think that is a tribute to their coaching staff. We're expecting to get their best. Offensively, they have some young playmakers that can really do some things with the ball once they get it in their hands."

WHO WILL IT BE?

Arkansas did not name a starting quarterback this week as Nick Starkel and Ben Hicks are both expected to see action. In the past two weeks, the backup has outplayed the starter in close losses to Texas A&M and Kentucky.

"We haven't made that decision yet," Morris said Wednesday before practice. "At this point, I want both of these guys to prepare like they are going to be the starter."

NIX LEARNING ON THE FLY

Auburn freshman quarterback Bo Nix had his first patch of adversity in the loss to Florida, throwing a pair of interceptions. Malzahn said he expects Nix to learn and improve.

"There are things that he feels comfortable with and you get on the practice field and there are things he can execute at a high level. That's what you call," Malzahn said. "Things that maybe we need a little bit more time, we don't call it. So, it's really as simple as that — what he feels comfortable with. We have worked hard on that last week and we will continue that this week. He feels more comfortable with a lot more things than he did the first game, but now we're halfway through our season and we had an off-week so we are in a different spot. He is not the same true freshman that he was the very first game the beginning of the year where we are learning. Now he knows about our offense and we have a plan moving forward the second half of the season."

The Razorbacks face a daunting schedule the rest of the way with road games against No. 1 Alabama and No. 2 LSU and No. 22 Missouri at home. In his 1½ seasons at Arkansas, Morris has yet to win an SEC game.

Arkansas junior running back Rakeem Boyd had a career-best 134 yards against Kentucky, including a 74-yard burst for a touchdown. Boyd leads the SEC in rushing with 617 yards. Last season, the transfer from Independence (Kansas) Community College rushed for 734 yards while battling through injuries.