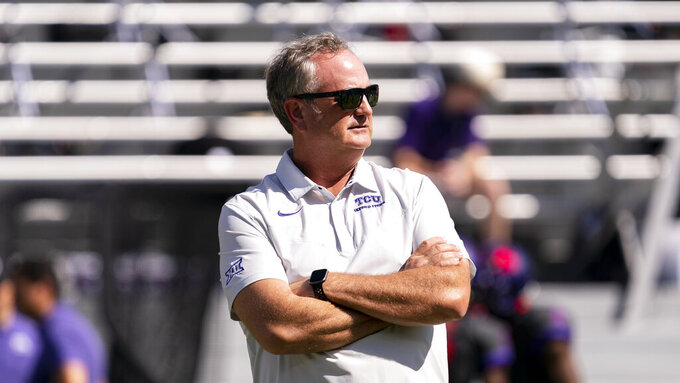 FORT WORTH, Texas (AP) — Kansas State coach Chris Klieman and TCU's Sonny Dykes provide similar descriptions about the focus of their teams, while players from both sides think much the same way.

One of those teams will be alone atop the Big 12 standings after they meet Saturday night.

Cornerback Josh Newton said the undefeated and eighth-ranked Horned Frogs (6-0, 3-0 Big 12 Conference) still haven't played their best game, and he is fully confident all of his teammates agree even after winning three consecutive games against Top 25 opponents for the first time in school history.

“Starting fast, playing four quarters, our type of football," Newton said about what they need to do.

Running back Deuce Vaughn believes Kansas State (5-1, 3-0), coming off its open date and with a three-game winning streak, hasn't yet played a complete game, especially on offense.

“That’s what we’re excited about ... understanding that we haven’t touched the peak of our performance that we can have," Vaughn said.

“It’s been good to see us be able to overcome adversity," Dykes said. “The one thing for me that’s been really impressive is just our guys' ability to focus on the task at hand. They’ve been really good about doing that, not getting ahead of themselves, not talking about, you know, all these things they want to accomplish."

The Wildcats rebounded from a 17-10 home loss on Sept. 17 to Tulane, which this week got ranked for the first time since 1998, by beating Texas Tech at home, and winning on the road against Oklahoma and Iowa State, the latter 10-9 before their break.

“Resolve, resiliency, belief. Block out the outside noise and just focus on the next day and focus on the next opportunity,” Klieman said. “You know, it’s not always going to be pretty, but if you can continue to believe in the plan, believe in each other, believe that you’re going to find a way. It’s been really cool to watch the last three weeks us survive and attack the adversity that we faced.”

Quarterback Max Duggan and the Frogs have lost their last three games against K-State and were held to 17 points or fewer each time.

With Duggan back in the starting role after losing that job going into the season, TCU has the Big 12′s top offense with 526.7 total yards, 7.7 yards per play and 45.8 points a game. Duggan is the league’s most efficient passer, with 1,591 yards while completing 69% of his attempts, along with a Big 12-best 16 touchdowns passing and only one interception.

Kansas State defensive end Felix Anudike-Uzomah had a career-high four sacks against TCU last season. The 6-foot-4, 255-pound junior is tied for the national lead with 1.08 sacks per game (6 1/2 total). The Frogs have allowed only three sacks in Big 12 play.

TCU's overtime touchdowns against Oklahoma State were a 25-yard catch by Quentin Johnston and a game-ending 2-yard run by Kendre Miller.

After only 12 catches for 114 yards the first four games, Johnston has 22 catches for 386 yards in the last two weeks. Dykes said this week that the 6-foot-4 receiver was banged up a bit early in the season.

“We were trying to play him enough to get him experience and try to get him into a routine," Dykes said.

Miller is a bruising back with more than 100 yards in three of the past four games. He has a rushing TD in every game this season, and a seven-game overall streak tied for the second-longest in school history behind LaDainian Tomlinson’s 15 in a row that end in 2000.

“He’s a raging bull when he’s running the ball,” Newton said of Miller.

Even with dynamo running back Vaughn and dual-threat transfer Adrian Martinez, the only QB/RB duo in the country to both have more than 500 yards rushing, the Wildcats are ninth in the Big 12, averaging 28.7 points and 403 total yards a game.

Martinez has 546 yards rushing with nine TDs, while Vaughn has 661 yards and three TDs.

The extra time between games helped Vaughn, who gingerly walked off late in the fourth quarter against Iowa State and didn’t return. Vaughn said he got leg-whipped while blocking.

“That’s football. So just got to get the body back healthy, ready to go for the next one,” he said this week.