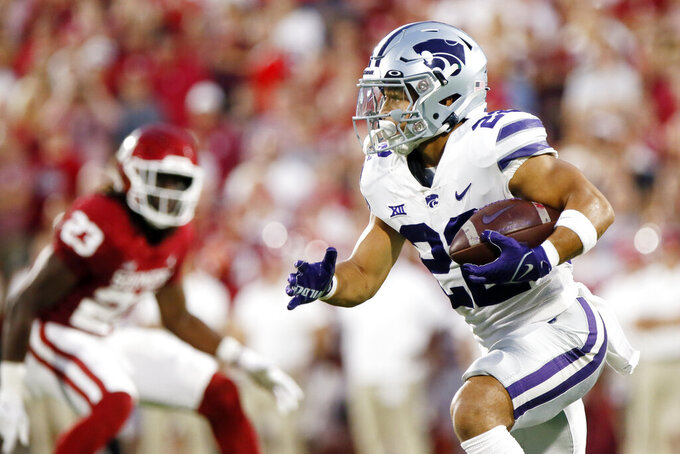 Kansas State running back Deuce Vaughn (22) carries the ball against Oklahoma in the first half of an NCAA college football game, Saturday, Sept. 24, 2022, in Norman, Okla. (AP Photo/Nate Billings)

Some things to watch in Week 6 of the Big 12 season:

No. 17 TCU at No. 19 Kansas. An unexpected matchup of undefeated teams on the second Saturday in October when the Big 12 is usually focused on the Red River rivalry. Even ESPN's “College GameDay” is going to be on location in Lawrence, Kansas, not at the State Fair of Texas for Texas-Oklahoma.

Second-year Kansas coach Lance Leipold has already had quite an impact for the Jayhawks (5-0, 2-0 Big 12), who have matched their win total of the past three seasons combined and are now ranked for the first time since 2009. TCU (4-0, 1-0), with first-year coach Sonny Dykes, is coming of a 31-point home win over the Sooners.

This is matchup of two of the Big 12's most efficient quarterbacks: Jalon Daniels for Kansas and TCU's Max Duggan, who returned to the starting role after Chandler Morris got hurt in the season opener. Daniels and Duggan have 11 touchdowns each, and only one interception among them (Daniels).

Iowa State's Big 12-best defense against Kansas State's Adrian Martinez and Deuce Vaughn, the conference leader at 127.6 yards rushing per game. Dual threat quarterback Martinez has run 33 times for 319 yards and seven touchdowns, while completing 33 of 53 passes for 350 yards with two TDs and no interceptions as the 20th-ranked Wildcats won their first two Big 12 games. The Cyclones allow only 255.4 total yards and 14.4 points a game.

Texas Tech is playing its fifth consecutive Top 25 opponent to match the longest streak in school history (2012). The Red Raiders have split the first two. According to STATS, they are the first team since Ohio State in 1995 to play five ranked opponents in their first six games. ... The Big 12's 11.3 scoring margin in conference games is the smallest of the Power Five leagues. ... Iowa State's Colby Reeder and Kansas State's Daniel Green are the only Big 12 linebackers with two interceptions.

Oklahoma State LB Mason Cobb is the team's leading tackler with 30 overall (18 solo, 12 assists) and is the Big 12 leader with 1.8 tackles for loss a game. He also had a big play for the seventh-ranked Cowboys in their 36-25 win at Baylor last weekend, when he stopped running back Richard Reese for no gain from the Cowboys 7 when they had a 9-3 lead about midway through the third quarter.