Book it! Kelly, Irish like what they've seen in returning QB 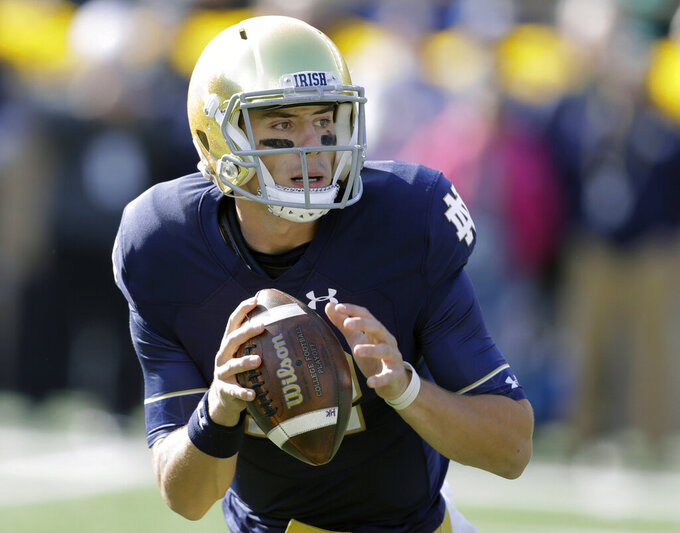 FILE - In this Oct. 13, 2018, file photo, Notre Dame quarterback Ian Book (12) throws during the first half of an NCAA college football game against Pittsburgh, in South Bend, Ind. At a school that has produced its share of legendary quarterbacks, the 6-foot, 208-pound senior was told by coach Brian Kelly and offensive coordinator Chip Long to push the envelope this spring. (AP Photo/Darron Cummings, File)

SOUTH BEND, Ind. (AP) — Ian Book came into spring practice with the idea of being out of his comfort zone.

At a school that has produced its share of legendary quarterbacks, the 6-foot, 208-pound senior was told by coach Brian Kelly and offensive coordinator Chip Long to push the envelope.

"I want to make those even harder throws into those smaller windows," Book said after completing a school-record 68.2% of his passes (214 of 314) for 2,628 yards and 19 touchdowns in leading Notre Dame to a playoff berth after a 12-0 regular season. "That's what it takes to be an elite quarterback, to have an elite offense."

The season-ending, 30-3 loss to Clemson fuels Book's hunger to be even better. A late-season rib injury that forced him to miss the Florida State game was followed by a three-game span (victories over Syracuse and Southern California before the playoff loss) during which Book's completion rate fell to 56.4%. He was just 17 of 30 for 160 yards against the Tigers, whose nasty defense forced him to scramble over and over again.

The message this spring: Get rid of the happy feet, stay in the pocket, go through the reads and take a chance on the throws he dared not to attempt in 2018. Including the deep ones.

"I expected a lot from Ian this spring," said Long, now in his third year as coordinator. "I told him, 'Hey, challenge it. Challenge the offense. Test your arm.' Ian has been challenging himself with all of his throws. There hasn't been a fear to turn it loose. You've got to push yourself to do that if you want to be considered an elite quarterback."

Book took up Long's gauntlet, on the field and in the locker room.

"I wanted to challenge myself more, but I didn't want to create bad habits or force throws that are not possible," Book said. "I wanted to be more of a vocal leader, something I've been working on a ton. Another was challenging myself on the tighter (pass-catch) windows. The third was going through my full-read progression — the second and third reads are where the tight windows are — and trusting the guys to be in the right spot, trusting the offensive linemen, and staying in the pocket and delivering the football."

Kelly and Long said they like what they've seen in more than a dozen practices ahead of Saturday's 90th Blue-Gold game.

"Vertically, (Book's) throwing the football down the field with accuracy, confidence, movement in the pocket," Kelly said after Book hit junior receiver Michael Young for a touchdown pass on a fourth-and-10 play to end a recent practice. "(He has) ball placement on back-shoulder throws (and there's) a little more air for our guys to adjust to the football. What we can see has been a nice step up for him."

Book's teammates have seen the positive changes, too.

"He's come into spring being 'the guy' with nothing to worry about," said fifth-year slot receiver Chris Finke, who averaged 11.7 yards on 49 receptions that were third behind NFL-bound Mile Boykin (59) and Chase Claypool (50). "He's reading defenses well, delivering throws with confidence."

On Tuesday, Book was as accurate as ever with all of his throws, the best a back-shoulder, 40-yard effort to Claypool, a 6-foot-4, 229-pound senior.

"This spring I would say he's insane consistent," Young said. "It's like ridiculous — the ball is never in the wrong place, the timing is always there, it's never too early, it's never too late. Geesh! I just really can't do no wrong because he's going to make me right."

Kelly and Long have been able to turn their attention to 6-foot-5, 225-pound Phil Jurkovec, who saw mop-up action in two games his freshman season but has a clear role as the likely backup this year with Brandon Wimbush's departure to Central Florida as a graduate transfer. Quarterback Brendon Clark, a 6-foot-2, 217-pound true freshman, arrives on campus in June.

"Phil is a confident guy — and I like it — and he wants to be a great quarterback," Long said. "He's way more confident that he was when he came in last August. The little things every day . all the things a young quarterback needs to do and just keep building confidence in himself."

"I think (there's been) the natural kind of evolution of a quarterback kind of learning college football at the highest level — some good days followed up by some not-so-good days," Kelly said of Jurkovec. "We're beginning to add a little more with him and we're feeling pretty good that he's making the progress."

So is Book, who has lofty goals.

"You watch any guy in the NFL, it's pretty amazing they are able to stay relaxed in the pocket, go through all their reads and make the right throws," Book said.