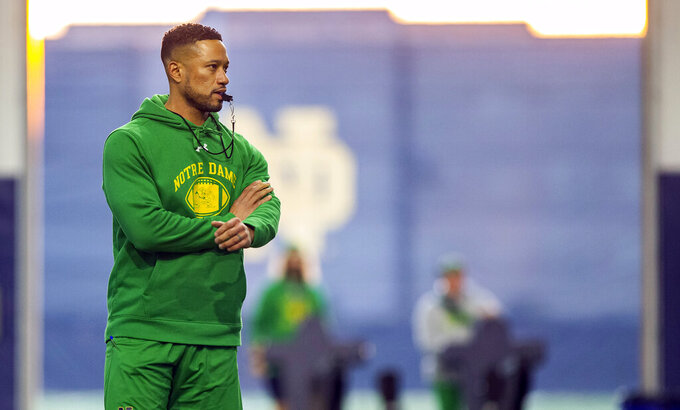 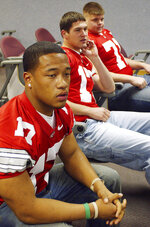 SOUTH BEND, Ind. (AP) — Marcus Freeman was born and raised a Buckeye and then lived out the dream of so many kids who grow up in Ohio, earning a football scholarship to play for THE Ohio State University.

Over five years at Ohio State, playing linebacker, interning in the athletic department and working as a graduate assistant coach, Freeman's leadership skills took shape and his meteoric rise to become the head coach of Notre Dame at age 36 began.

“I don’t know if I could say in one word what (Ohio State) means to me, but I know I wouldn’t be in this situation if it wasn’t for those five years that I spent in Columbus, Ohio,” Freeman told The Associated Press this week.

Freeman opens his first season as Fighting Irish coach on Saturday night at the place that launched him, facing No. 2 Ohio State in a tantalizing showdown.

His father, Michael, the Columbus native who taught him to love the Buckeyes, will be at the Horseshoe. So will his former coach, Jim Tressel. Ohio State will be honoring the 2002 national championship team that Freeman cheered for as high schooler.

For Freeman, though, there will be no time for sentimentality. His fifth-ranked Fighting Irish are unlikely to face a tougher test this season.

“He’ll handle it well, but it’ll be challenging. There’s no question about it,” Tressel said.

Freeman grew up outside Dayton, Ohio, in Huber Heights. His father spent nearly three decades in the Air Force and his mother, Chong, was an immigrant from Korea. In the Freeman home, Saturdays were for watching the Buckeyes play on television.

When Marcus Freeman grew into a football star and one of the very best high school recruits in the state, the Buckeyes came to him. He enrolled early in 2004. Tressel remembers a humble young man, who soaked up all that was offered by his coaches and older teammates.

What Freeman took away from his time playing for Tressel is now at the core of how he runs his program at Notre Dame.

“He had a unique ability to make everybody feel important,” Freeman said. “I think that’s the understanding that you can't do this thing by yourself. And I feel the exact same way as a leader here. Everybody in this football program is important, no matter who you are."

During his final season as a player at a Ohio State, Freeman was already working on a graduate degree in sports management.

Athletic director Gene Smith set him up with an internship that exposed Freeman to one of the biggest athletic departments in the country and all that goes into it.

“He got a good view of what it would be like and I actually thought that he was on that trajectory,” Smith said. “Because he could have been excellent at it.”

Freeman said having seen the inner workings of an athletic department helped him appreciate that it's not just about football.

“You have to work with other sports and have to understand that the job of the athletic director is to take care of the bigger picture, the entire athletic department,” Freeman said. “But part of that is understanding that football is the biggest revenue-generating sport and so you have to have success in the football program to help all the other sports.”

Freeman worked closely with Pat Chun, who was then one of Smith's top lieutenants at Ohio State and is now the AD at Washington State. Chun said Freeman took full advantage of all Ohio State had to offer.

“You get an AD in Gene Smith, a head football coach in Jim Tressel and a position coach in Luke Fickell that were all focused on developing the whole student-athlete,” Chun said. “And part of that football program was really focused (on) life after football.”

Life after football came earlier than Freeman expected. He was drafted in the fifth round by the Chicago Bears in 2009, and bounced to two other teams.

In 2010, Freeman was diagnosed with a heart condition and that ended his playing career. He acknowledges that had he been able to play longer, athletic administration might have been his career path.

“I wasn’t ready to give up the game of football at that moment,” Freeman said. “And that’s why I kind of got into coaching.”

Freeman returned to Ohio State as a grad assistant in 2010 and the next year landed his first full-time coaching gig at Kent State, working under former Ohio State assistant Darrell Hazell. At Kent State and at Purdue, Freeman took notice of how Hazell always seemed to have the respect of his players even as the Boilermakers struggled.

“To see the way he continued to lead and the man he was. The way that our program still would rally behind him no matter what, it was a reflection of his leadership style and how it was successful with kids today,” Freeman said.

Freeman is already 0-1 as head coach at Notre Dame, having lost the Fiesta Bowl in January to Oklahoma State just a few weeks after he was named Brian Kelly's replacement.

Kelly's surprising departure to LSU fast-forwarded Freeman's career and thrust him into one of the toughest jobs in college football.

His old coach believes Freeman has been well-prepared for the challenge ahead.

“He played at Ohio State. He coached at Ohio State,” Tressel said. “So he’s been in a place that’s very similar to Notre Dame, and he knows what that’s all about.”

By Ralph D. Russo just now
6 minutes ago
By Stephen Hawkins 14 minutes ago
an hour ago
2 hrs ago