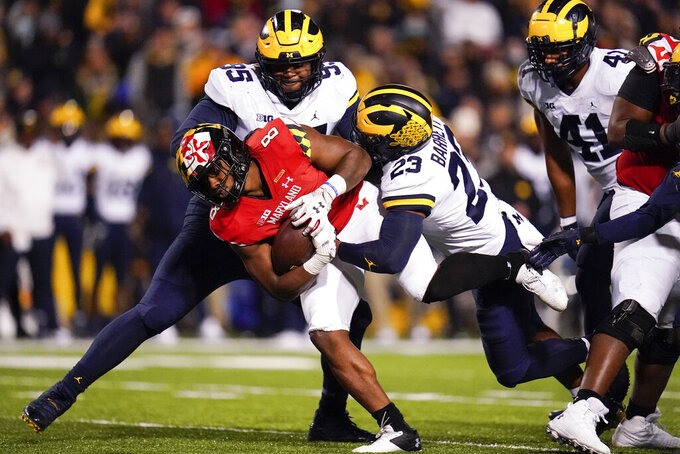 The College Football Playoff semifinal in the Orange Bowl will match surging Michigan against a Georgia team that went unbeaten through the regular season before a humbling loss to the defending national champion.

Defense has been the calling card for both.

The Dec. 31 matchup at Hard Rock Stadium in Miami Gardens, Florida, was set up when the Wolverines were slotted No. 2 and the Bulldogs No. 3 in the final CFP rankings released Sunday.

Michigan (12-1) and Georgia (12-1) are two of the more storied programs in college football, but they have faced each other only twice before. They split the two meetings, one in 1957 and the other in 1965.

The Wolverines got on a roll after their only loss, 37-33 at Michigan State on Oct. 30. They closed with a 42-27 win over then-No. 2 Ohio State and put a 42-3 beatdown on Iowa in the Big Ten championship game on Saturday night.

“Just a bunch of guys that wanted to give it their very best and then feel good about what they accomplished,” Michigan coach Jim Harbaugh told ESPN. “They accomplished a lot through a lot of work. Guys just working and not worrying.”

Georgia, with the most dominant defense in the country through its first 12 games, came into the season with high expectations. The Bulldogs were No. 5 in the preseason and No. 2 to Alabama in the first five polls of the regular season. They took over the top spot after Alabama lost at Texas A&M on Oct. 9 and were there until they fell to No. 3 in the AP poll Sunday.

The Bulldogs went into Southeastern Conference championship game as a touchdown favorite against Alabama. But their offense went flat and committed two turnovers, one an interception returned for a touchdown, and they converted only 3 of 12 third downs. Alabama's Bryce Young threw for 421 yards and three touchdowns and the Bulldogs lost 41-24.

“You have to be brutally honest with yourself at a time like this,” Georgia coach Kirby Smart said. “You've got to be able to go through and say, ‘Well, who are we? What are we doing? Well, maybe we’re not as good as we thought in some areas, and where can we improve that?’ And sometimes you’ll see that through a loss.”

Defense is the identity for both teams. The Wolverines feature two of the best defensive ends in the country in Aidan Hutchinson and David Ojabo, who have combined for 25 sacks, and Georgia has the premier defensive tackle in Outland Trophy finalist Jordan Davis.

This year's other semifinal matches No. 1 Alabama (12-1) against No. 4 Cincinnati (13-0) in the Cotton Bowl. The winners play for the national championship Jan. 10 in Indianapolis.

Michigan is the first team to make the playoff after being unranked in the preseason. The Wolverines, who were 2-4 in the pandemic-shortened 2020 season, didn’t crack the AP Top 25 until after their second game, a 31-10 win over Washington on Sept. 11.

Harbaugh once again will be coaching against the school where his brother-in-law, Tom Crean, is head men's basketball coach.

Harbaugh took over at Michigan in 2015, and his first two years Crean was head coach at fellow Big Ten member Indiana. Crean is in his fourth season at Georgia. Crean is married to Harbaugh's sister, Joani.

There are seven Georgia natives on the Michigan roster. Three of them are starters: cornerback DJ Turner (Suwanee), defensive lineman Christopher Hinton (Johns Creek) and long snapper William Wagner (Alpharetta). The Bulldogs have no players from Michigan.

Smart shut down questions about the Bulldogs' quarterback situation. Stetson Bennett threw for 340 yards and three touchdowns but was intercepted twice, with one returned for a touchdown that gave Alabama a 21-point lead in the fourth quarter.

JT Daniels had been the starter to begin the season but has had injury issues. Bennett took over as starter in October. Smart said there was no discussion about playing Daniels against Alabama and that the plan was to stand pat with Bennett for the Orange Bowl.

The last time the teams met, Georgia beat the No. 7 Wolverines 15-7 on Oct. 2, 1965, in what was billed as a measuring stick game for Vince Dooley's undersized but 10th-ranked Bulldogs.

Georgia rose as high as No. 4 in the rankings that year but lost four of six to end the season. It wasn't a vintage year for the Wolverines, either. They started the season ranked No. 4 but finished 4-6 under Bump Elliott.