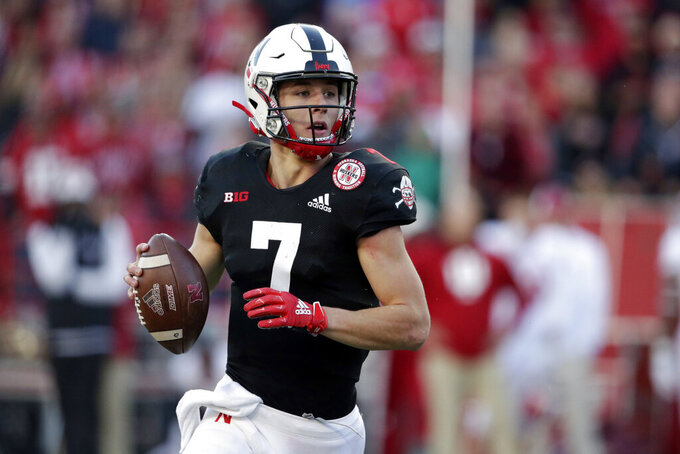 FILE - In this Saturday, Oct. 26, 2019, file photo, Nebraska quarterback Luke McCaffrey (7) rolls out during the second half of an NCAA college football game against Indiana in Lincoln, Neb. Luke, the younger brother of Carolina Panthers’ star running back Christian McCaffrey and son of former NFL receiver Ed McCaffrey, made an unexpected entrance against Indiana last week and turned in a strong performance. (AP Photo/Nati Harnik, File) 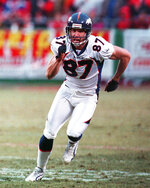 LINCOLN, Neb. (AP) — Nebraska freshman Luke McCaffrey made his true debut in college football last weekend, and one of his rivals in backyard games must have had flashbacks as he watched.

That would be Christian McCaffrey, the Carolina Panthers' star running back.

Luke is the last of the Brothers McCaffrey. The family patriarch is Ed, a 13-year NFL receiver best known for his nine seasons with the Denver Broncos.

The oldest son is Max, a receiver who went to Duke and played in a handful of NFL games in 2017-18. Christian, who played at Stanford like Ed, is a contender for NFL MVP this year. Dylan is a redshirt sophomore backup quarterback for Michigan.

Luke has the look of the Cornhuskers' quarterback of the future, his skills and ability to freelance honed in those rough-and-tumble games back home in suburban Denver.

"He's got a heck of a chip on his shoulder," Christian told The Associated Press. "He wants to win. He loves football. He's energetic. He's the youngest, so he's been pushed around his whole life, and I think that really is explained in his attitude and the way he approaches things. He's got a ridiculously competitive spirit."

Christian took in the Huskers' 38-31 loss to Indiana from the Panthers' hotel in San Francisco last Saturday, the day before a 51-13 loss to the 49ers. Luke made an unexpected entrance in the second quarter when Noah Vedral, the backup to injured quarterback Adrian Martinez, got hurt.

Luke was sharp in five-plus series before he, too, had to leave when he got up limping in the fourth quarter. He completed 5 of 6 passes for 71 yards, including a roll-out pass for a 24-yard touchdown. The speed and flash he showed on runs prompted drawn-out cheers of "LUUUUUUKE." He carried 12 times for 76 yards, with six going for 9 yards or longer.

"I get more nervous watching my brothers than I do for my games," Christian said. "I could tell he was having fun. That's the biggest thing as an older brother, that's what you want for a little brother. I was so proud, and hopefully he can continue it. I know he worked so hard, so it was good to see him out there."

The game officially counted as Luke's second. He had to take a snap against Northwestern on Oct. 5 when Vedral was forced to the sideline for one play because his helmet came off. Luke can play in two more games and retain his redshirt, giving him four more years of eligibility.

Luke said he would usually team up with Max and play against Christian and Dylan in those two-on-two games of yesteryear.

"Pretty intense, pretty competitive," he said. "We usually would go oldest-youngest together. It depended on the day. We were 50-50. I was always the littlest one and would have to come up with different strategies to beat those guys."

Luke said he doesn't necessarily feel added pressure because of his last name.

"I don't really know what it's like to have anything else, to be honest," he said. "It's something I always had with me a little bit. In watching my brothers, it's been special. Who better to be a role model?"

Dylan McCaffrey is in his second year backing up Shea Patterson. He played the last two series against Notre Dame last week and threw a 26-yard pass for the Wolverines' final touchdown in a 45-14 win. It was Dylan's fourth appearance this season and 10th in his career.

Asked if he's imagined him and Dylan being the quarterbacks in a Nebraska-Michigan game, Luke said that would be premature. The teams are scheduled to meet in Lincoln in 2021.

"I know that's probably my parents' nightmare," he said.