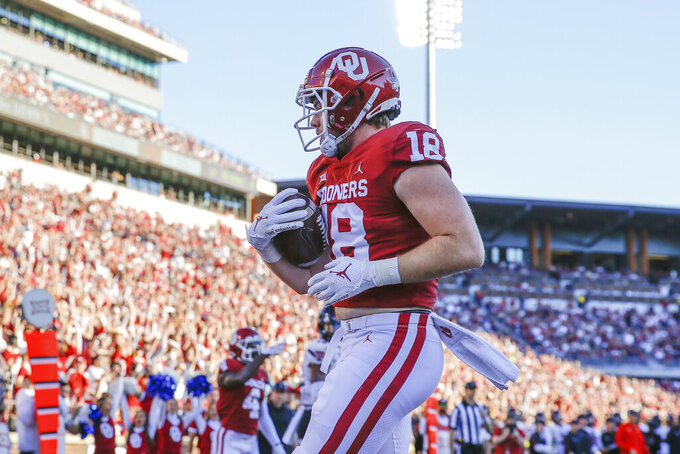 Oklahoma tight end Austin Stogner (18) runs in for a touchdown during the second half of an NCAA college football game against Texas Tech, Saturday, Oct. 30, 2021, in Norman, Okla. Oklahoma won 52-21. (AP Photo/Alonzo Adams)

The season is about to get serious for No. 4 Oklahoma and the Big 12.

The Sooners come off a open date to play the first of what could be their four toughest games of the season. They visit No. 18 Baylor, which is coming off an upset loss but is still in the Big 12 hunt, in one of four games Saturday matching ranked teams.

After that, Caleb Williams and the Sooners head to Iowa State. The Cyclones are also still hanging in the Big 12 race, but like the Baylor, can't afford another loss.

The season finale is the annual Bedlam showdown at No. 10 Oklahoma State, which is sitting by itself in second in the Big 12. The Sooners and Cowboys could meet again, too, the following week in the Big 12 championship game in Arlington, Texas.

It's the type of stretch that could slingshot the Sooners (CFP No. 8) up the College Football Playoff rankings and give a player a boost in a wide-open Heisman Trophy race.

Williams has been sensational since taking over at quarterback for the Sooners at halftime of the Texas game. Best case-scenario he will have been the Sooners’ QB1 for seven and a half games; no matter how well Williams does down the stretch, barely playing in 38% percent of your team's games has to count against you.

The picks, with lines from FanDuel Sportsbook:

OK, maybe this is the week the Bearcats get back to the blowouts? ... CINCINNATI 45-17

This is the best offense the Bulldogs' dominant defense has faced ... GEORGIA 38-17.

Sooners offense has found another gear with Williams at QB, but can the defense tighten up? ... BAYLOR 38-35.

According to Sportradar, the only team to defeat three AP top-10 teams as an unranked team in a season was Illinois in 1959; the Spoilermakers will try to become the second ... OHIO STATE 34-17.

Spartans have won five of six meetings since the Terps joined the Big Ten ... MICHIGAN STATE 38-24.

Nittany Lions trying to play spoiler to the Wolverines, who still have Big Ten championship and CFP hopes ... MICHIGAN 24-20.

Horned Frogs have won three of four meetings and the last three in the series were decided by a touchdown ... OKLAHOMA STATE 28-20.

Aggies have been rolling since upsetting Alabama, winning three straight by an average of 23 points ... TEXAS A&M 28-21.

For first place and a commanding lead in the ACC Atlantic ... WAKE FOREST 35-31.

Want to be a college kicker? Mike Leach might have a spot for you in Starkville, Mississippi ... AUBURN 26-23.

Hawkeyes have won six straight in the battle for Floyd of Rosedale ... IOWA 20-17.

Wildcats have been a tough out for the Badgers recently; the teams have split the last eight meetings and none have been decided by more than 14 points ... WISCONSIN 28-10.

Chanticleers will be without injured QB Grayson McCall, maybe for the rest of the season ... COASTAL CAROLINA 31-24.

Arizona State (minus 5 1/2) at Washington — @kmasterman

Huskies coach Jimmy Lake is suspended for the game because of an incident on the sideline with one of his players last week ... ARIZONA STATE 24-17.

First-place in the Mountain West's West Division on the line ... SAN DIEGO STATE 27-21.

Hurricanes have won four straight in the series as the 'Noles have flailed in recent years — but FSU is getting better ... FLORIDA STATE 35-34.