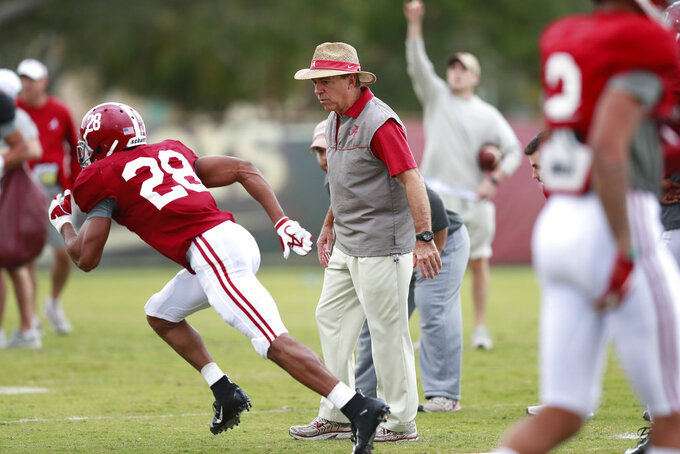 The Fighting Irish recruit coast-to-coast, befitting of their independent status and necessary for a small Catholic school, with high academic standards, located in a state that does not produce a lot of major-college talent.

The first Notre Dame team to reach the College Football Playoff has players who were signed to scholarships out of high school by the Irish from 24 states, plus Washington D.C. and Canada, the most far-flung roster of four semifinalists. These days, though, Notre Dame's approach is not uncommon — especially among the top programs.

No. 1 Alabama's roster includes recruits signed from 22 states, from Connecticut to California, with pickups from Pennsylvania, Indiana, Utah and Hawaii to go along with all that Deep South talent. The Crimson Tide faces No. 4 Oklahoma in the Orange Bowl semifinal on Saturday. The Sooners have developed productive pipelines into California and Florida to complement a stronghold across the border in Texas.

No. 2 Clemson, Notre Dame's Cotton Bowl opponent Saturday, has lately been taking advantage of a raised profile to stretch outside its Carolinas/Georgia home base.

Over the last decade under coach Nick Saban, Alabama has won more than any program. The Tide is in its fifth straight playoff, looking for a sixth national title since 2009. Alabama's foundation is built in state. The Tide have 20 players signed from Alabama on their roster, nearly double the second-most from a state (Florida, 11). But Alabama also has as many signees from California, including All-America tackle Jonah Williams, on its roster (five) as it has from neighboring Mississippi.

"We have a system of evaluation that we use on players, it doesn't matter where they are," Saban said. "If they meet the criteria we're looking for at a position and we have defined criteria that we're looking for at each position, critical factors that we look for, and when guys have them we start recruiting them."

And because Alabama churns out NFL players much the way it racks up championships, Saban's staff can get into the conversation with any recruit anywhere — like quarterback Tua Tagovailoa, whose family moved with him from Hawaii to Tuscaloosa. His brother, Taulia Tagovailoa, is part of Alabama's latest signing class.

Even though Alabama is in the Southeastern Conference and Oklahoma is in the Big 12, the Tide and Sooners regularly cross paths on the recruiting trail, especially in Texas.

"Oh yeah, (Oklahoma) recruited me," Alabama All-America safety Deionte Thompson said. "But you know, my mom just fell in love with this place, so once mom said 'This is where you're coming,' I didn't have no other choice."

Oklahoma has 23 players on its roster signed from Texas, more than any other state. But under former coach Bob Stoops, the Sooners took advantage of staff connections in California to make it a reliable source of talent. The 2010 class with four-star California recruits Tony Jefferson and Kenny Stills is credited with establishing Oklahoma's western front. The Sooners' nine current California signees are third-most behind Texas and Oklahoma (16).

Now, under coach Lincoln Riley, who came to Oklahoma after a stint as offensive coordinator at East Carolina, the Sooners have some pull in the southeast. Oklahoma has four players signed from North Carolina and four from Florida, including star receiver Marquise Brown.

"I think they have seized a national identity particularly with this offense and particularly with a coach in Lincoln Riley that has the energy and the willingness to really be aggressive on the recruiting trail to go and take on some battles nationally," said Barton Simmons, director of scouting for 247 Sports.

Among the playoff teams, none has a roster more loaded with players signed from its backyard than Clemson. The Tigers have 48 players signed out of North Carolina (10), Georgia (18) and home-state South Carolina (20). Throw in another five from Florida and four from Virginia.

"We love that footprint, for sure," recruiting coordinator and quarterbacks coach Brandon Streeter said.

But as Clemson has become a national powerhouse under coach Dabo Swinney, making the playoff four straight seasons and winning a national title in 2016, recruits from all over have been seeking out the Tigers, similar to the way they do the Tide.

Linebacker Isaiah Simmons from Olathe, Kansas, said he didn't know anything about Clemson until a year before he enrolled. The school's social media accounts drew his interest and once he took a visit he was hooked on the Southern hospitality.

"Literally everyone there was just ... brought you in like you were their cousin," Simmons said.

Notre Dame treats the big cities not far from South Bend, Indiana, — Chicago, Indianapolis and Detroit — as recruiting focal points, but the Irish currently have as many Illinois signees (10) as Florida (10).

Coach Brian Kelly says his recruiting department has two evaluation units: one for talent and the other for academic and cultural fit. That second part helps narrow the scope.

"Certainly you're going to start with the schools that closely identify with Notre Dame," Kelly said. "That's going to be Catholic schools. Private schools that have a tradition of sending kids to Notre Dame, so we're going to hit those geographical areas concentrated with good football programs that meet that criteria."