Dantonio can tie record when No. 19 Spartans host WMU 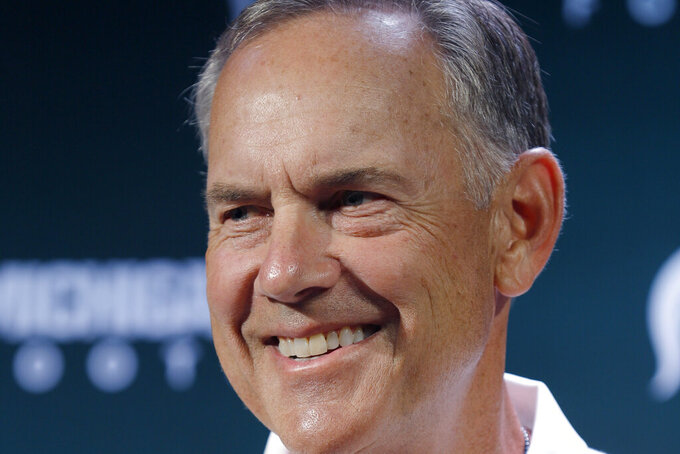 Michigan State coach Mark Dantonio made it clear he wasn't pleased with the offensive performance in last week's 28-7 win over Tulsa. He expects the Spartans to be ready this coming weekend. Motivation shouldn't be a problem for WMU either in this clash of in-state opponents.

Kenny Willekes and Raequan Williams vs. the Western Michigan offensive line. Willekes and Williams wreaked havoc last week as the Spartans held Tulsa to minus-73 yards rushing. The Broncos will need to contain those two standout defensive linemen at least a little if they want to pull off an upset.

WMU: Keith Mixon had kickoff returns of 52, 26 and 65 yards in a season-opening win over Monmouth.

Michigan State: QB Brian Lewerke avoided turnovers last week, but the Spartans managed only one offensive touchdown, and that was on the first drive of the game. Lewerke threw for 192 yards.

Dantonio needs one victory to tie Duffy Daugherty's school record of 109. ... Jon Wassink threw for 368 yards and five TDs in WMU's opener. ... Tulsa's minus-73 yards rushing against Michigan State was the lowest total by an FBS team since Mississippi State held Florida to minus-78 in 2000. ... WMU has not won a game in this series since 1919. ... WMU has faced at least one Big Ten team in every season since 2006. The Broncos beat Northwestern and Illinois in their unbeaten regular season of 2016. ... A win would also tie Dantonio with Daugherty for 13th on the Big Ten's career list. Next up would be John Cooper (111) and Fielding Yost (113).