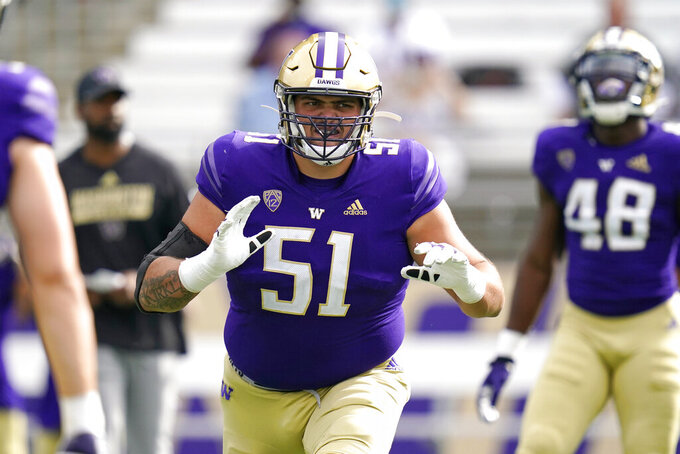 SEATTLE (AP) — The first few months of Kalen DeBoer’s tenure at Washington was about restoration.

Renewing the confidence in the players he was inheriting. Rebuilding the belief that Washington is still an elite program.

Coming off a tumultuous season in which Washington finished with its worst record since 2009, fired coach Jimmy Lake with two games remaining and suffered its worst Apple Cup loss in the 113 games played against rival Washington State, DeBoer inherited quite the task in his first head coaching job with a power conference program.

While DeBoer is new to being a head coach at this level, his track record says Washington could be successful in a hurry. DeBoer won nine games last year in his second season at Fresno State and in doing so landed on the radar for a number of bigger jobs. In 2019, Indiana won eight games for the first time since 1993 in DeBoer’s one season as the offensive coordinator in Bloomington.

And then there was DeBoer’s unrivaled success at the NAIA level, winning 67 of 70 games and three national titles in five seasons at Sioux Falls.

That doesn’t mean a massive turnaround will be immediate for Washington. But the combination of DeBoer’s previous success and the talent in the Huskies program lends to the belief that this won’t be a long retooling.

“I wouldn’t trade my past for the world,” DeBoer said. “I’ve got a chance to see a lot of great coaches being an assistant over the last 15 years. That’s led to being at Fresno for a couple where I got a chance to, again, reshape who I am and what our teams are going to look like. Now I get a chance to do that at (Washington).”

The expectation is that Indiana transfer Michael Penix Jr. will be Washington’s starter when the season begins on Sept. 3 against Kent State. Penix knows DeBoer’s system the best, having played for him in 2019 at Indiana. As a freshman, Penix threw for 10 touchdowns in just six games before injuries took over. Injuries have defined the majority of Penix’s career; he has never played more than six games in a season.

Washington is hoping that changes, but if injuries resurface — or Penix struggles — there are other options. Dylan Morris has started 15 games the past two seasons but wore the blame for an offense that badly underperformed last season. There’s also highly touted freshman Sam Huard, who was thrown into an unfair situation last season of making his first career start against Washington State and struggled as expected.

Whoever is under center should be playing behind an excellent offensive line. Left tackle Jaxson Kirkland is the anchor but will miss the season opener after entering the NFL draft and hiring an agent but withdrawing after ankle surgery. Corey Luciano seems anchored at center with Henry Bainivalu at right guard.

For all the attention on DeBoer’s arrival and what Washington’s offense is going to look like, how the Huskies respond defensively is likely more important to their success. The secondary took big hits with the loss of Kyler Gordon and Trent McDuffie to the NFL. The Huskies are also likely to be without inside linebacker Edefuan Ulofoshio for most of the season following a knee injury suffered last winter. A boost for Washington would be if the trio of pass rushers Zion Tupuola-Fetui, Jeremiah Martin and Bralen Trice can live up to what they’ve flashed during fall camp.

DeBoer’s debut will come in Week 1 when Washington hosts Kent State, followed by a visit from FCS Portland State, which has increased attention after the Huskies lost to Montana in last year’s opener.

Washington’s marquee nonconference matchup comes Sept. 17 when the Huskies host No. 15 Michigan State, part of a first four weeks when they don’t leave home. The Huskies avoid both No. 7 Utah and No. 14 USC on the schedule but have road trips to No. 11 Oregon, UCLA and Washington State.