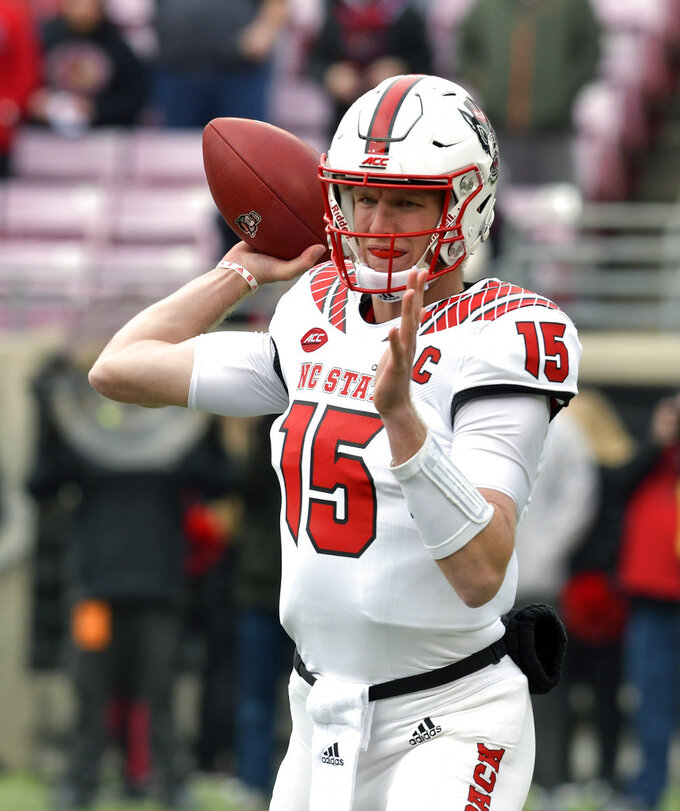 LOUISVILLE, Ky. (AP) — Both North Carolina State and Louisville entered Saturday needing an emotional pick-me-up. Louisville came out fast, while the Wolfpack came out on top.

Ryan Finley threw for 316 yards and a career-high four touchdowns as N.C. State cruised to a 52-10 victory over the Cardinals.

The Wolfpack (7-3, 4-3) came into Saturday having lost three of their last four. They rolled up 518 yards and 45 straight points on the Atlantic Coast Conference's second-worst defense that went through a coaching change less than a week ago.

Louisville interim coach Lorenzo Ward made his debut after Bobby Petrino was fired Sunday. The Cardinals (2-9, 0-8) held N.C. State on the game's first drive, then marched 40 yards to take a 3-0 lead on a Blanton Creque 32-yard field goal. The Wolfpack, however, controlled the game from there.

Wolfpack coach Dave Doeren said he talked to his players about the Louisville situation and how the Cardinals would likely start.

"We talked about not beating us and making them beat them," Doeren said. "We just had to just kind of weather their emotional storm really which they had. I think our players showed resiliency and toughness in this game."

Kelvin Harmon caught seven passes for 100 yards and a score. Reggie Gallaspy Jr. added two rushing touchdowns and caught a scoring pass from Finley. Gallaspy's 1-yard plunge with 56 seconds left in the first half capped a 13-play, 80-yard drive and made it 17-3.

N.C. State then took advantage of two short fields on its first three drives of the second half to extend the lead to 31-3 with 9:10 left in the third quarter.

Finley, who completed 26 of 36 passes, said they knew Louisville would come out differently than how they showed on film.

"I think a team like that is dangerous," he said. "But at the same time, if you jump out on them early and get into a rhythm like we did, it was going to be tough on them. We knew the situation. We just had to come down here and play our game."

It marked the fourth straight game, and sixth this season, the Cardinals gave up 50 or more points.

With the performance, Finley rose to second on the school's all-time yards passing list, trailing only Philip Rivers' 13,484 yards. At 9,757 yards, he has a chance for 10,000 yards with up to three games remaining.

Doeren said that shows his graduate quarterback is special.

"He knows who he is," Doeren said. "He incredibly competitive, he wants to play better. He works on the things he needs to get better at. He's great with his teammates. He's an inspirational guy."

Just before the game, Louisville announced that starting quarterback Jawon Pass would sit out the first quarter "for missing a team obligation." Ward ended up keeping his sophomore off the field until 11:03 remained in the third quarter. As a result, redshirt freshman Malik Cunningham got his second start of the season.

Ward said he kept Pass out because Cunningham played well in the first half.

Cunningham ran 14 times for 100 yards and a touchdown but left the game for good late in the fourth quarter with an apparent hand injury.

North Carolina State: After letting a 10-point lead slip away late against Wake Forest nine days ago, the Wolfpack came out Saturday with a much improved effort from its offense. Rather than settle for field goals, like they did against the Demon Deacons, the Wolfpack cashed in touchdowns on six of the seven drives that reached the red zone.

Louisville: The beginning of the Ward era saw a more inspired effort by the team initially, but bad fundamentals continued to haunt the Cardinals. The defense had 12 men on the field for a third-and-7 play at the Wolfpack 28. Eight plays later, N.C. State scored its first touchdown. On offense, the Cardinals had a second-quarter drive where they got to the Wolfpack 13. However, two false starts and a holding penalty thwarted the drive, which ended with a 36-yard missed field goal try. The wheels fell off in the second half.

"Both sides of the ball, we started good," Ward said. "We just shot ourselves in the foot with penalties."

Louisville: The Cardinals conclude their season next Saturday with a home game against their archrival, No. 20 Kentucky.