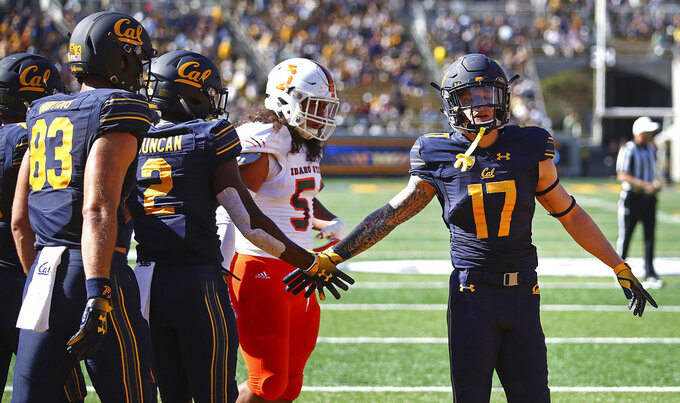 California's Jordan Duncan (2) celebrates with Vic Wharton III after scoring a touchdown against Idaho State during the first half of an NCAA college football game Saturday, Sept. 15, 2018, in Berkeley, Calif. (AP Photo/Ben Margot) 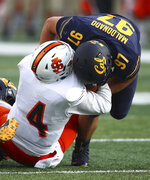 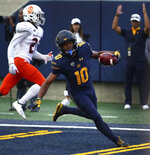 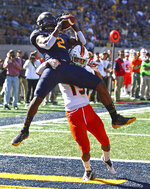 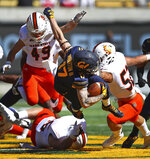 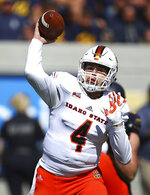 BERKELEY, Calif. (AP) — Chase Garbers completed 20 of 25 passes for 224 yards and three touchdowns in his second game as Cal's starting quarterback, and the Golden Bears overcame a sluggish start and beat FCS-level Idaho State 45-23 on Saturday.

Marcel Dancy ran for 80 yards and scored his first career TD, while Jordan Duncan had a pair of touchdown catches as the Bears (3-0) rolled in their final game before a Pac-12 opener next week.

Ashtyn Davis scored on an 89-yard kickoff return, had a momentum-changing interception in the first quarter and added another key play on defense for Cal.

Tanner Guellar passed for 179 yards and a touchdown, Mitch Guellar caught six passes for 156 yards and Ty Flanagan had an 11-yard TD run for Idaho State. The Bengals (1-1) were 2 for 14 on third down.

Cal managed only 37 yards on its first three possessions and didn't get going until Davis' interception off Guellar late in the first quarter.

Dancy followed with a 5-yard touchdown run to cap a 40-yard drive.

Garbers found Duncan for a 28-yard touchdown on the Bears' next possession after Duncan got past Idaho State cornerback Koby Lowe to make it 14-0.

Davis then turned the game in Cal's favor for good.

Gueller connected with brother Mitch Guellar coming across the middle for a short gain but two Cal defenders ran into each other trying to make the tackle. As Mitch Guellar broke free and raced toward the end zone, Davis chased him down from behind and made the tackle at the 8 following a 63-yard gain.

After Cal's defense held the Bengals to a field goal, Davis took the ensuing kickoff back 89 yards for a touchdown. It's the Bears first kickoff return for a touchdown since 2014.

Garbers and Duncan hooked up again before halftime for a 14-yard touchdown to put Cal up 28-3.

Idaho State: Outside of the the Guellar brothers, who had a couple of nice plays, the gains were few and far between for the Bengals. They are now 1-27 against FBS teams.

California: The Bears made it through the first three weeks unscathed but they'll have to pick up the pace now that they face the Pac-12 portion of the schedule. Garbers looks more settled in but Brandon McIlwain provided a lift off the bench with his running. The defense also put more pressure on the quarterback, something coach Justin Wilcox had been looking for.

California: Hosts No. 20 Oregon on Saturday.