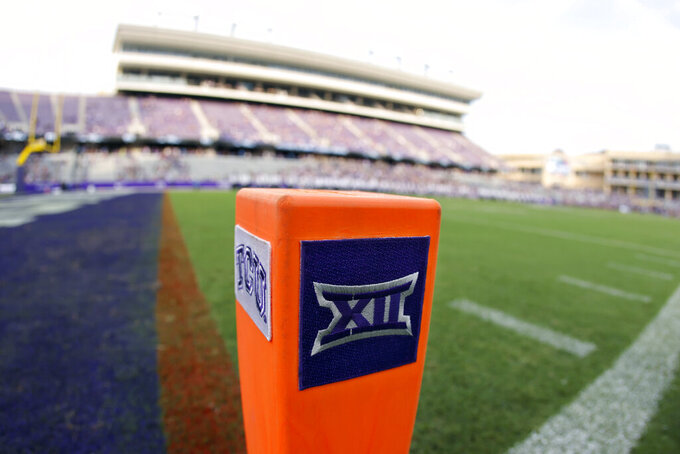 FILE - In this Saturday, Sept. 4, 2021, file photo, a Big 12 Conference logo is displayed on a goal line pylon before Duquesne played TCU in an NCAA college football game, in Fort Worth, Texas. The Big 12 has extended membership invitations to BYU, UCF, Cincinnati and Houston to join the Power Five league. That comes in advance of the league losing Oklahoma and Texas to the Southeastern Conference. (AP Photo/Ron Jenkins, File)

The four schools that were extended invitations Friday to join the Big 12 Conference:

Notes: BYU is the last school from outside what are now the Power Five conferences to win a football national title. The Cougars were 13-0 in 1984 when playing in the WAC, finishing as the nation’s only undefeated team after starting that season unranked. Quarterback Ty Detmer is the school’s only Heisman Trophy winner, after throwing or 5,188 yards and 41 touchdowns in 1990. BYU has played as a football independent since 2011 after 12 seasons in the Mountain West. The Cougars were 11-1 last year while playing in the pandemic-altered season, and didn’t play any P5 opponents. Their only loss was at then-No. 14 Coastal Carolina, but they finished with a 49-23 win over UCF in the Boca Raton Bowl. Kalani Sitake is in his sixth season as BYU’s coach.

Men's hoops: The Cougars, who play basketball in the West Coast Conference, have advanced past the second round of the NCAA Tournament once in their last 20 NCAA Tournament appearances. That was in 2011 when they made the Sweet 16 before an overtime loss to Florida.

Notes: The Knights were the self-proclaimed national champs in 2017 following a 13-0 season capped with a Peach Bowl win over Auburn. Coach Scott Frost then left for Nebraska, his alma mater. They were sixth in the final AP poll. They started 12-0 in 2018 under Josh Heupel before losing to LSU in the Fiesta Bowl. The three-time AAC champions are the only Group of Five team with multiple New Year’s Six game victories. They have six 10-win seasons since 2010. That included 12-1 in 2013 under coach George O’Leary when their only loss was 28-25 to then-No. 12 South Carolina, and they beat Baylor in the Fiesta Bowl. Gus Malzahn is his first season at UCF after the previous eight seasons as head coach at Auburn, where in 2010 he was offensive coordinator when the Tigers won the national title.

Men's hoops: UCF has been to only five NCAA men’s basketball tournaments. When the Knights made it in 2019, it was their first appearance since 2005, and they got their first-ever tourney win over VCU before losing to No. 1 seed Duke in the second round.

Notes: Defending AAC champion and No. 7 Cincinnati is 32-6 over the past three seasons, with dual-threat QB Desmond Ridder the starter for all of those wins. The Bearcats this season were the first non-Power Five team in the preseason top 10 since 2012. They made its first New Year’s Six game last season, when they were 9-0 before a 24-21 loss in the Peach Bowl when Georgia got a 53-yard field goal with 3 seconds remaining. Fifth-year head coach Luke Fickell, signed until 2026, previously spent 15 years on the staff at Ohio State, his alma mater. He was a co-defensive coordinator when the Buckeyes won the first College Football Playoff national championship seven seasons ago.

Men's hoops: The Bearcats have had 13 consecutive winning seasons in men’s basketball, and made nine consecutive NCAA Tournament appearances from 2011-19. They were 31-5 and finished sixth in the final Top 25 poll of 2017-18, when they lost 75-73 to Nevada in a second-round tourney game.

Notes: Andre Ware was the 1989 Heisman Trophy in Houston’s big-play offense, throwing for 4,699 yards and 46 TDs in a season that included a 95-21 win over SMU and five other games scoring at least 55 points. When Ware turned pro, David Klingler followed with 5,140 yards and 54 TDs in 1990. The Cougars had finished as a top 10 team three times in the 1970s when coach Bill Yeoman favored the option-oriented Veer offense. More recently, Houston had a pair of 13-1 seasons in the past decade, in 2011 under coach Kevin Sumlin and 2015 for Tom Herman before he went to Texas. Dana Holgorsen is in his third season with the Cougars after leaving West Virginia, where he had overseen the Mountaineers’ transition from the Big East to the Big 12.

Men's hoops: The Cougars made the NCAA Final Four last season, their first since the Phi Slama Jama era with Hakeem Olajuwon and Clyde Drexler. Houston lost in the national semifinal game in 1982, and then lost in the championship game each of the next two seasons.