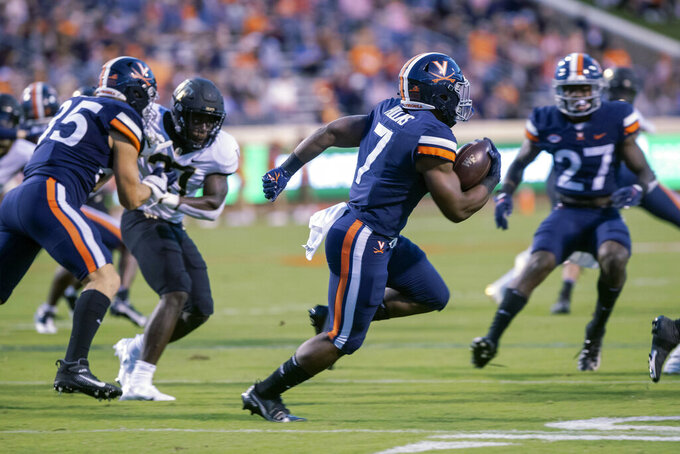 The Demon Deacons (4-0, 2-0 Atlantic Coast Conference) won their fifth in a row against the Cavaliers as Hartman connected on scoring throws of 39 yards to Taylor Morin and 12 yards each to Blake Whiteheart and A.T. Perry.

The Demon Deacons drove 75 yards in the opening 2:41 with Hartman finding Morin all by himself for a 39-yard touchdown.

Virginia drove to the Demon Deacons' 4 yard-line with a first-and-goal, but Brennan Armstrong lost two yards, Mike Hollins gained a yard and Armstrong threw incomplete on third and fourth down.

“I mean, it’s electric. I love this team. It’s really fun. The guys are awesome to play with and we just we have fun out there. And we got that stop, that was obviously a highlight of the game and it’s just a great feeling,” he said.

Justice Ellison later burst free for a 63-yard run to start a drive and finished it with a 1-yard dive to make it 17-3.

“It'd be hard to find fault right now with how we're executing our offense,” Deacons coach Dave Clawson said. “We're able to do what we need to do.”

Virginia trailed 20-3 at halftime and tried to make a game of it with a pair of third quarter touchdown drives, but Hartman and Wake Forest answered each with one of their own, sending fans streaming for the exits.

“I thought we executed really well in the second half. You know, they came back and scored and had a chance to get back into it. We responded,” Clawson said. “I thought we got good, good pressure on the quarterback. We needed that. We were a little bit bend but don’t break. We gave up some plays and some yards, but for the most part, we kept them out of the end zone and our offense was incredibly efficient.”

Armstrong, who threw for 554 yards last week, topped 400 yards for the third consecutive game. He hit on 33 of 59 passes for 407 yards and hit Jelani Woods on a 17-yard scoring throw and Dontayvion Wicks from 22 yards.

Still, he said: “The bottom line is Wake Forest won most of the one-on-ones from the beginning of the game to the end,” he said.

Nick Sciba booted three field goals for the Demon Deacons and has now made 64 of 71 attempts in his Wake Forest career. That's better than 90% which is what NCAA career record holder Brett Baer of Louisiana Lafayette finished with for his career.

Wake Forest: The Demon Deacons pace of play is a bit faster than most, and Virginia struggled at times to keep up and line up. A rotation of three running backs in the first half also kept them fresh, and Hartman was well protected.

Virginia: The problems that surfaced in the loss to North Carolina remained: a slow start and the absence of a running game. They finished with 506 yards, including 99 rushing, but much of that came late or with Armstrong running away from constant pressure. He was sacked six time for minus 37 yards.

The Demon Deacons are back at home next Saturday to face Louisville.

The Cavaliers have another short week and play at Miami on Thursday night.