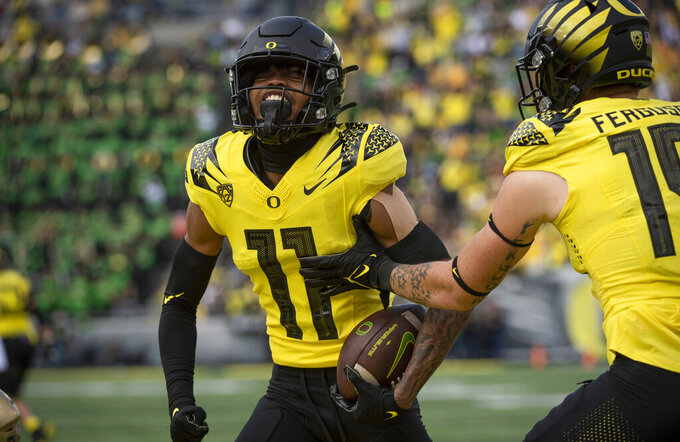 SEATTLE (AP) — Whatever the reason, Washington coach Jimmy Lake decided this was the moment to throw a jab at No. 7 Oregon.

A counterpunch could land Saturday when Washington and Oregon renew hostilities.

Normally a rivalry week is when statements are measured and words are parsed carefully to avoid any controversy. But Lake was unfiltered for a moment this week when he added a bit of gasoline to the simmering rivalry between the Huskies (4-4, 3-2 Pac-12) and Ducks (7-1, 4-1).

Asked if Washington’s coaches have a recruiting rivalry with Oregon, Lake said that was “more pumped up than it is.”

“The schools that we go against are way more; have academic prowess — like the University of Washington, Notre Dame, Stanford, USC,” Lake said. "We go with a lot of battles toe-to-toe all the way to the end with those schools. So I think that’s made up a lot and pumped up in your world. In our world, we battle more academically prowess teams.”

Lake tried walking back his comment later in the week during his radio show, but the words had already taken off. It wasn’t the nastiest jab, but it certainly garnered attention.

Oregon coach Mario Cristobal avoided getting involved. But Oregon President Michael Schill was willing to fire back at Lake — by referencing his predecessor — in comments to The Oregonian.

Schill said: “UW is a wonderful school with a great football history. I have great respect and affection for its president, its academic and football program and its former exceptional football coach, coach (Chris) Petersen. I look forward to our team meeting theirs on the gridiron this Saturday.”

The barbs have added a little spice as the teams resume their series after a year off. Their game last year was canceled due to a COVID-19 outbreak among the Huskies that also led to Oregon taking Washington’s spot in the Pac-12 title game.

“Knowing that there’s real hate in people’s hearts for this game and for us, so just being able to go there and kind of quiet down the crowd and really be able to play and really put it out there you kind of feel it,” Thibodeaux said. “That’s kind of why we play for the rivalries, for the big games.”

Oregon and Washington feature two of the elite pass rushers in the Pac-12. Thibodeaux has been credited with 23 quarterback pressures in the past three games. He had a career-high nine tackles, including 4½ tackles for loss, two weeks ago against UCLA.

Washington’s Zion Tupuola-Fetui returned from an Achilles tendon injury three games ago and, while he has just one sack, he’s been able to put pressure on the quarterback, even with a limited snap count.

“I’m just happy with his progression from that injury. I’m happy for the boost that he’s given us,” Lake said. “There’s been no setbacks so far, and knock on wood he’s stayed healthy and still just amazed that he’s even back at this point.”

Oregon is ranked No. 4 in the first College Football Playoff rankings this season. The Ducks are the lone Pac-12 team to be ranked.

Oregon receiver Johnny Johnson III will miss the first half of the game because of a targeting call in the third quarter of last week’s game against Colorado. Johnson ranks second on the Ducks, behind RB Travis Dye, with 21 catches for 255 yards and a touchdown this season.

“First half you got guys that have been repping and have been prepping. Johnny’s going to help and assist in that role to make sure those guys are ready. He should be popping at the seams, so when the second half kickoff is on that he’s ready to roll. He won’t have to come out of the game. He’ll be well-rested,” Cristobal said.

One of the biggest questions of the game is whether Washington has enough offense to keep up with the Ducks. The Huskies slipped past Arizona and Stanford without doing much on the offensive side, although Washington’s run game busted out with a season-high 230 yards against the Cardinal. Still, the Huskies are 104th in the country in scoring offense and have scored less than 30 points in six of eight games.