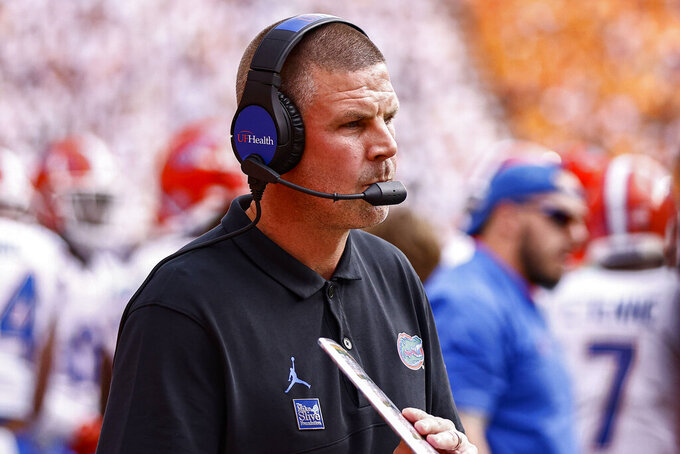 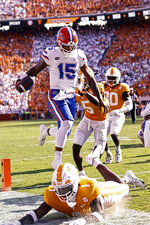 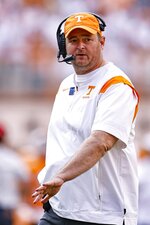 KNOXVILLE, Tenn. (AP) — Despite an upper-body injury and the absence of his favorite target, Hendon Hooker was at his best Saturday night.

The Tennessee quarterback threw for 349 yards and two touchdowns and ran for 112 yards and a score to lead the No. 11 Volunteers to a 38-33 victory over No. 20 Florida.

It was Tennessee's second win over Florida in the last 18 meetings and snapped a six-game losing streak in the series. The win gave the Volunteers their first 4-0 start since 2016.

“This is one of the great stories in college football,” Tennessee coach Josh Heupel said of his team. “The game-day atmosphere... That is Rocky Top. It's what we built.”

“The work we put in is showing,” said Vols running back Jabari Small, who rushed for 90 yards and a TD. “It shows how far we've come.”

Tennessee (4-0, 1-0 Southeastern Conference) took control in the fourth quarter when it traveled 87 yards for a TD after a fumble by Gators (2-2, 0-2) quarterback Anthony Richardson.

Richardson had a career-high 453 passing yards and two touchdowns and ran for 62 and two scores in a raucous Neyland Stadium.

Tennessee led 17-14 at halftime following a first half loaded with big offensive plays on both sides.

Hooker, who shook off the injury, threw for 248 yards, including a 70-yard connection with Bru McCoy for the Vols' longest play from scrimmage this season.

“I didn't feel any spotlight or stage,” Hooker said. "Just another day at the office.

“Injuries are part of the game. If you can go, you go. You're going to get banged up.”

“Hendon is a warrior,” said Heupel.

McCoy, a transfer from Southern California, stepped in for the injured Cedric Tillman (left leg) with five catches for 102 yards and a TD.

“I work hard every day to do my job,” McCoy said. “We try not to think about who's on the field.”

“But I think when we get back and watch the film, there's going to be 12-15 plays where Florida beats Florida,” Napier said.

A 99-yard drive that ended with a one-yard pass from Hooker to McCoy, gave Tennessee the lead 7 seconds before the break.

Richardson had a career-high 220 passing yards by intermission and connected with his first TD pass of the season. Keon Zipperer broke three arm tackles on his way to a 44-yard score.

“It feels good just to have fun out there and play football,” said Richardson. “It's fun. It's a blessing.”

MISSING (OR NOT) IN ACTION

The left leg injury that forced Tennessee WR Cedric Tillman to miss a good deal of the Akron game caused him to be held out. ... Vols WR Jimmy Calloway couldn't play in the first half against the Gators because of a team suspension after being ejected last week for punching an Akron player. ... Florida OT Michael Tarquin (lower leg injury) and long snapper Marco Ortiz did not play. .... LB Ventrell Miller, who missed last week's game with a right foot injury, started.

Tennessee QB Hendon Hooker had a string of 14 consecutive pass completions, including 12 against Akron, before a misfire. ... In back-to-back second-quarter plays, Richardson threw his first TD pass of the season, for 44 yards to Keon Zipperer, before Hooker's 70-yarder to McCoy. ... Midway through the second quarter Richardson had thrown for 207 yards, a career high. ... Florida had just three sacks in its first three games. It had three Saturday. ... RB Jabari Small's 16-yard TD reception was his first. ... Florida was five of six in fourth-down conversions.

Florida: In order to have success in the remainder of their SEC games, the Gators will need to add a dimension to their offensive attack. Once defenses focus on containing Richardson in the pocket, the variables in the offense are limited. Richardson was able to avoid the pressure and has been sacked just twice this season.

Tennessee: Getting WR Cedric Tillman (leg) healthy is imperative if the Vols plan on competing against the elite in the SEC. Having that weapon available is key to giving LSU, Alabama and Kentucky something to game-plan against.

Florida: After playing three ranked teams in the first four weeks of the season, the Gators get a break by hosting Eastern Washington Saturday.

Tennessee: An open date Saturday gives the Vols an opportunity to catch their breath before going to LSU and then hosting No. 2 Alabama.