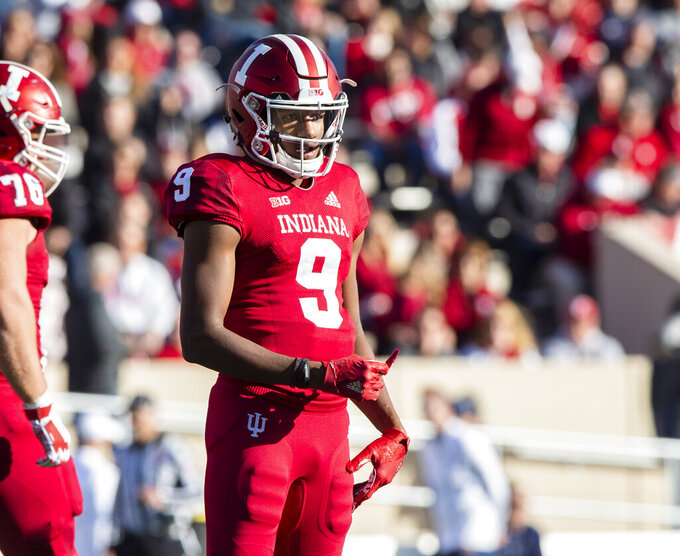 FILE - In this Saturday, Oct. 20, 2018, file photo, Indiana quarterback Michael Penix Jr. (9) looks to the sideline during the first half of an NCAA college football game in Bloomington, Ind. Coach Tim Allen's biggest decision will be choosing a quarterback. Peyton Ramsey has made 16 starts over the last two seasons and will be seriously challenged by redshirt freshman Michael Penix Jr., who is coming back from a torn anterior cruciate ligament, and Jack Tuttle, who transferred from Utah. (AP Photo/Doug McSchooler, File)

Indiana coach Tom Allen is betting on his quarterback of the future. He also believes Michael Penix Jr. can win now.

Allen announced Monday the highly-touted redshirt freshman will be the starting quarterback in Saturday's season opener against Ball State in Indianapolis after beating out incumbent Peyton Ramsey and Jack Tuttle, a transfer from Utah.

"It wasn't what Peyton didn't do. It was more of what I believe Mike can be," Allen said at his first news conference this season. "So we let these guys compete, and it was very, as we said all along, it was very close. We made the decision last week so we could get the proper reps."

Ramsey started 16 games over the past two seasons and started summer camp as the front-runner. But as Penix's surgically repaired anterior cruciate ligament got stronger, Allen apparently decided Penix's potential outweighed the experience of Ramsey, who held off Penix last summer and then kept the job after the injury just as it appeared Penix was about to replace Ramsey.

Allen made it clear in early August what he expected out of the winner: Someone who could be trusted in the huddle in clutch moments and he never wavered from that approach.

The 6-foot-3, 202-pound left-hander came to Indiana with quite the resume. He threw 61 touchdowns and only six interceptions at Tampa Bay Tech, was named the Hillsborough County player of the year in 2017 and originally committed to Tennessee before changing his mind and joining the Hoosiers. Penix also was the center fielder on his high school baseball team, finished the 200-meter dash in 22.8 seconds and posted a long jump of 22 feet.

The Hoosiers thought all those traits would work in their favor.

"The talent is something everyone's kind of seen but I think throughout camp it was a matter of seeing him and the consistency he brings every single day," offensive coordinator Kalen DeBoer said. "There were a lot of plays he made that give you a lot of excitement about what this season holds when he's playing quarterback for you."

While the initial battle is over, Ramsey knows better than anyone on the roster that doesn't mean he'll be off the field or out of a job long. Two years ago, Ramsey lost the competition to fifth-year senior Richard Lagow then supplanted Lagow as the starter after four games before suffering a season-ending injury after the eighth game.

Last year, he held off Penix and graduate transfer Brandon Dawkins in camp and appeared to be on the verge of being replaced when Penix injured his knee against Penn State on Oct. 20.

And Allen acknowledged it could happen again in his third season as head coach.

"It's not a game-to-game decision," Allen said. "But like anybody else, he's got to perform. He's our starting quarterback, so he's got to go and lead our team, and he knows that we've made our decision and he has my full confidence."