Kendall glad to get back on field as West Virginia's QB 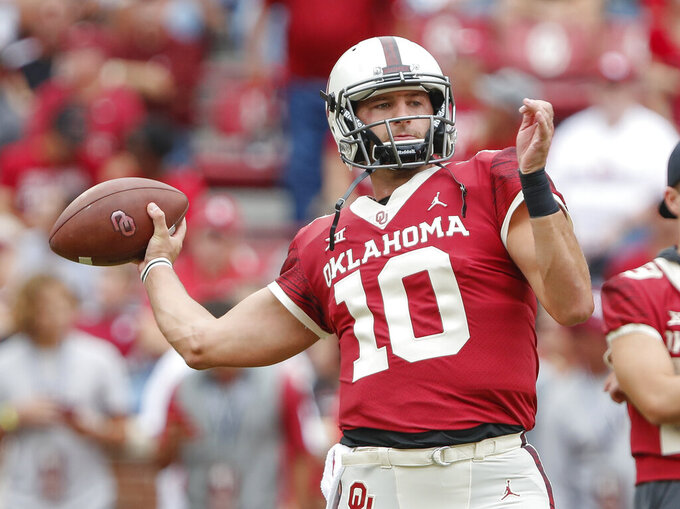 MORGANTOWN, W.Va. (AP) — Austin Kendall didn't presume that the vacant starting quarterback job was his upon arriving at West Virginia.

"I always knew there was competition," Kendall said. "You have to work for it."

Kendall was a career backup to Heisman Trophy winners Baker Mayfield and Kyler Murray at Oklahoma. Finally, the focus is on him seven months after coming to West Virginia as a graduate transfer. He'll get the start Saturday when the Mountaineers open the season at home against FCS James Madison.

Kendall got a brief taste at starting last September, playing in Oklahoma's first series against Baylor before being replaced by Murray. His other career appearances came in mopup duty. He's attempted 39 career passes. His last full game was in high school.

"I'm just excited to get on the field," Kendall said. "I'm just trying to be the leader everybody needs."

Brown has noticed that in recent practices.

"What I've seen him do is probably be more vocal, just because he knows it's now his offense," Brown said.

Some other things to know about the Mountaineers and Dukes:

New James Madison coach Curt Cignetti grew up in Morgantown, was a 1982 graduate of West Virginia and was a backup quarterback under two Hall of Fame coaches — his father, Frank Cignetti, and Don Nehlen. Curt Cignetti spent the past eight seasons as a head coach at Elon and before that at Indiana, Pennsylvania. His FBS stops as an assistant coach have included Alabama, North Carolina State and Pittsburgh.

Curt Cignetti was a West Virginia player when John Denver sang "Take Me Home, Country Roads" at the 1980 debut of Mountaineer Field. Cignetti's last time at the stadium was as an assistant under Pitt's Walt Harris in the late 1990s.

"Obviously, a lot of great memories," Cignetti said. "But truthfully, once we arrive at the stadium, it's kind of all business, whether it's Morgantown or anywhere else."

James Madison has 19 returning starters and is No. 2 in the preseason Championship Subdivision coaches poll . The Dukes lost in the second round of the national playoffs last year and lost to North Dakota State in the 2017 title game.

Normally, that would get an opposing coach's full attention. But Brown is still trying to install a system with an inexperienced roster.

"We're so young," he said. "I'm going to be worried about what we're doing. I don't think we have to worry about our guys overlooking anybody or not respecting their game. All you've got to do is turn on film."

Ben DiNucci enters his second season as the starting quarterback at James Madison. The Pitt transfer completed 68 percent of his passes last year for 2,275 yards with 16 touchdowns and 12 interceptions. He was the fourth-leading rusher with 433 yards and a team-high nine scores.

"I have total confidence and trust in him," Cignetti said. "He's played a lot of football. He's done a good job of decision making."

Brown prefers to keep his pregame talks brief and doesn't see the need to get his players any more hyped than they already will be.