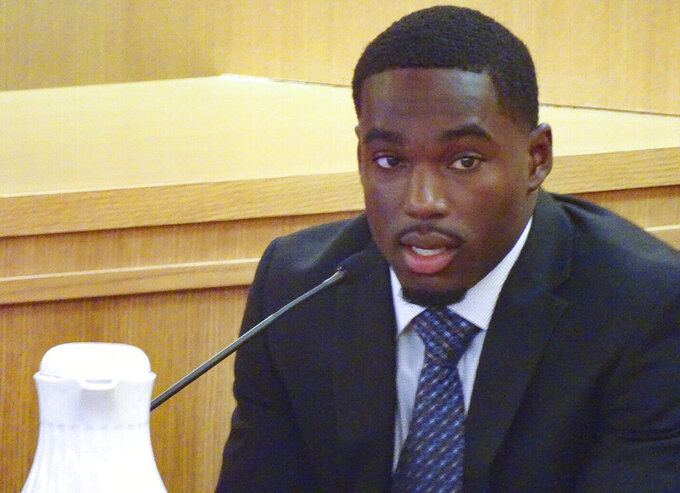 An attorney for Quintez Cephus is urging the University of Wisconsin-Madison to follow the lead of a jury that acquitted the former Wisconsin receiver and to not reinforce what he called the racial stereotype that black men are sexually aggressive.

Lawyer Stephen Meyer said at a news conference Monday afternoon that the school should allow Cephus to return. Cephus applied for reinstatement last week after the jury found him not guilty of two sexual assault charges. University officials say they're working to gather more information about the case.

Cephus appeared at the news conference with members of the football team and Meyer. He said he has no anger toward the university and that he knows his former teammates support him.

Meyer said the university needs to think about how people of color will view its decision.

The University of Wisconsin-Madison says no decision has been made about whether to readmit a football player who had been expelled after being charged with sexual assault.

Badgers wide receiver Quintez Cephus applied for reinstatement last week after a jury found him not guilty of two sexual assault charges. His attorney Stephen Meyer said Monday that the university is sending a "clear message" that they don't want Cephus back.

The university says in a statement posted on its website that Meyer is false. It says that the university is working to gather information, including all relevant court records, and will complete its review "as quickly as possible."

The university also notes that its code of student conduct is separate from criminal law and students may be held responsible for violations regardless of whether they are also criminal.

The attorney for former Wisconsin football player Quintez Cephus says university officials are sending a "clear message" they don't want the former Badgers wide receiver back despite his acquittal in a sexual assault case.

Cephus filed a petition for readmission last week, just days after a jury found him not guilty of sexually assaulting two students who said he had raped them.

Meyer says the university has made clear it won't make a decision until "well after the semester has started."