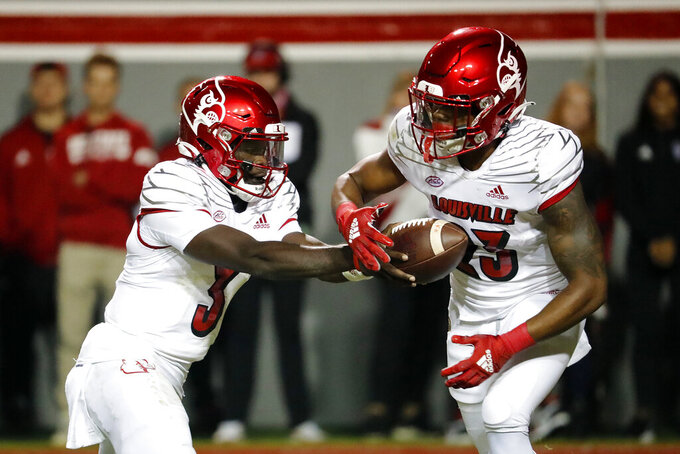 Louisville quarterback Malik Cunningham (3) hands the ball off to running back Trevion Cooley (23) during the first half of an NCAA college football game against North Carolina State in Raleigh, N.C., Saturday, Oct. 30, 2021. (AP Photo/Karl B DeBlaker)

LOUISVILLE, Ky. (AP) — Louisville hopes to take advantage of Clemson’s down year to earn its first victory against the Tigers since joining the Atlantic Coast Conference seven years ago.

Louisville is 0-6 against Clemson (5-3, 4-2) and enters Saturday night's meeting having lost three of four overall. Just getting a win is the priority right now, though knocking off the Tigers is an added incentive.

“Clemson is Clemson, whether it be 2010 or 2021,” Louisville running back Jalen Mitchell said. “Each game is an opportunity to come out and show the world that we can do something great. It doesn’t matter who we’re playing against, it’s just a matter of what we can do and how we can focus.”

Eliminating late-game collapses would certainly help Louisville. That pattern continued last week as North Carolina State erased the Cardinals' 10-7 lead entering the fourth quarter with 21 points to hand them a 28-13 loss. Louisville outgained State but struggled to score, and the defense ultimately wore down.

Breakdowns on either side of the ball can't happen against Clemson, even in a down year.

“They may have this record, but they're still Clemson and still have a lot of really good players," defensive coordinator Bryan Brown said. "We just got to go out and make sure we perform and execute like we have.”

Meanwhile, Clemson is coming off a 30-20 comeback victory over Florida State sealed with a defensive touchdown as time expired. The Tigers now face another challenge in Louisville’s rushing game led by Mitchell and dual-threat quarterback Malik Cunningham.

The Cardinals have averaged nearly 247 yards rushing over the past four games, and Clemson coach Dabo Swinney said keeping that threat in check is critical. Especially on the road, where the Tigers have lost three of four.

“We’ve got to make them keep snapping it,” Swinney said. “You know they’re explosive. It’s kept them in some games.

“I think for us it’s not giving up the explosive (play) and make them have to drive the ball down the field.”

Some other things to watch when Clemson visits Louisville:

Louisville lost another starter with Monday’s news that standout cornerback Kei’Trel Clark will miss the remainder of this season with a torn ACL. His 12 passes defended led the ACC, and the Cardinals now look to freshman Greedy Vance and sophomore Trey Franklin to fill a huge void.

"The other guys will have to rise up and they’re going to have to make plays," Louisville coach Scott Satterfield said.

ROSS ON THE MOVE

Clemson coach Dabo Swinney said the offense will keep moving junior receiver Justyn Ross around as the season goes on. Ross, at 6-foot-4, has been adept at playing outside on the boundary and inside on the slot to be Clemson’s leading receiver this season with 38 catches for 416 yards and three catches. He missed all of 2020 after spinal surgery and has recovered to make an impact this season.

Louisville Malik Cunningham accounted for 295 yards of offense against the Wolfpack and became the sixth player in school history to surpass 9,000 yards. He ranks 15th nationally at 307.2 yards per game, but he and the Cardinals face the ACC’s No. 2 defense in Clemson, which is allowing 323.4 yards per contest.

Clemson defensive coordinator Brent Venables says freshmen like starting safety Andrew Mukuba and reserve linebacker Barrett Carter have made an impact on defense. Mukuba has started six of eight games this season and been a critical part of a defense that leads the ACC against the pass, giving up only 117 yards a game. Carter started in the 27-17 loss at Pitt and gained attention last week as his defensive score with no time remaining turned a four-point Clemson lead into a 3-20 win over FSU.

“Two really good young players to go along with the other good players that we have,” Venables said. “It gives you a glimpse of what you can hope for in the future.”

Since winning the first three meetings by 15 combined points, Clemson has dominated the past three by average margin of 40.7 points. The Tigers have also scored at least 40 points in the past four matchups.