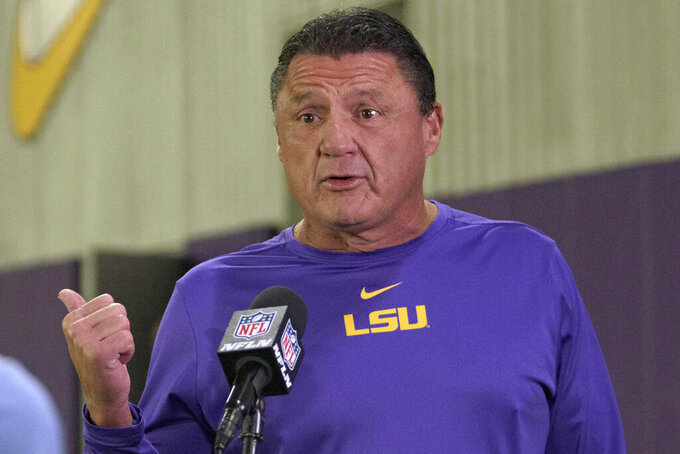 LSU coach Ed Orgeron maintained in a statement provided to state lawmakers Tuesday that he does not recall speaking with an elderly female security worker who said then-Tigers running back Derrius Guice made offensive sexual advances toward her during an event she was working in 2017.

Orgeron said he recalls only a brief phone conversation with a man who spoke on behalf of the woman, Gloria Scott, and that he was told soon after that LSU athletics administrators and lawyers were handling the matter.

“That is my remembrance from three years ago of a telephone call that I do not believe lasted much longer than two minutes, if that, and is admittedly vague,” Orgeron's statement said. "At the same time it is important to say, that me speaking to Ms. Scott directly or not, does not change the fact that what happened to Ms. Scott in 2017 is unequivocally wrong.“

Orgeron's statement conflicts somewhat with in-person, tearful testimony that Scott, now 74 years old, provided on March 26 to the Senate Select Committee on Women and Children. Orgeron had been asked to either provide a statement or appear before the committee during a hearing scheduled in Baton Rouge on Thursday.

State Sen. Regina Barrow, a Democrat from Baton Rouge who chairs the committee, called Orgeron's decision not to appear in person “troubling.”

“Coach Orgeron and all those involved in this matter owe it to (women who filed sexual misconduct complaints) to stop with this dismissive behavior and to own up to what occurred, taking responsibility for the actions that took place and the cover-up that followed,” Barrow said. “Only then can we begin to heal.”

The committee is looking into LSU's handling of sexual assault complaints made by or against its students and, in some cases, athletes and even former coach Les Miles.

Scott testified that she spoke with Orgeron. She said Orgeron described Guice as a troubled child and asked if the player could have the opportunity to apologize to her directly.

Scott recalled stating that she was not interested in an apology and wanted Guice suspended from LSU's upcoming game, the Citrus Bowl.

But Orgeron's version of events differ in that he said the man he spoke to "refused to put Ms. Scott on the phone unless I agreed to the (suspension of Guice) upfront.

“I told the gentleman that I would have to get back to him,” Orgeron stated. “I was not prepared to suspend a student-athlete for a game without a discussion with the university and obtaining more thorough information.”

Orgeron said that the following week, he was told by LSU officials that a man saying he represented Scott had called the university to demand monetary compensation, and that “the university's lawyers were now handling the situation.”

Guice never was suspended. He left LSU in good standing and was selected by Washington in the NFL draft, but was released after being arrested on domestic violence charges.

The legislative committee began its work on the heels of a report by a law firm hired law by LSU to audit how the university dealt with such cases. Among the audits conclusions: women students were often met with official resistance when seeking to report sexual misconduct perpetrated by fellow students, including football players during the tenure of Orgeron and previously under Miles' leadership. Since the audit, Miles has been fired from his most recent head coaching job at Kansas.

Orgeron has asserted that he supports the state Senate committee's “important work in protecting the safety and welfare of the greater Louisiana State University community,” and that he has cooperated fully with LSU's own efforts on that front.

“It is important for me to continue to state that what was said to Ms. Scott by Mr. Guice in 2017 is utterly unacceptable,” Orgeron's letter to the committee said. “Further, I was deeply upset when I watched the video of Ms. Scott’s testimony, as it was the first time that I heard all of the details of her encounter with Mr. Guice. I am devastated that she was talked to in such a vulgar and inappropriate manner, and I applaud her courage to provide her statements to the Committee.”