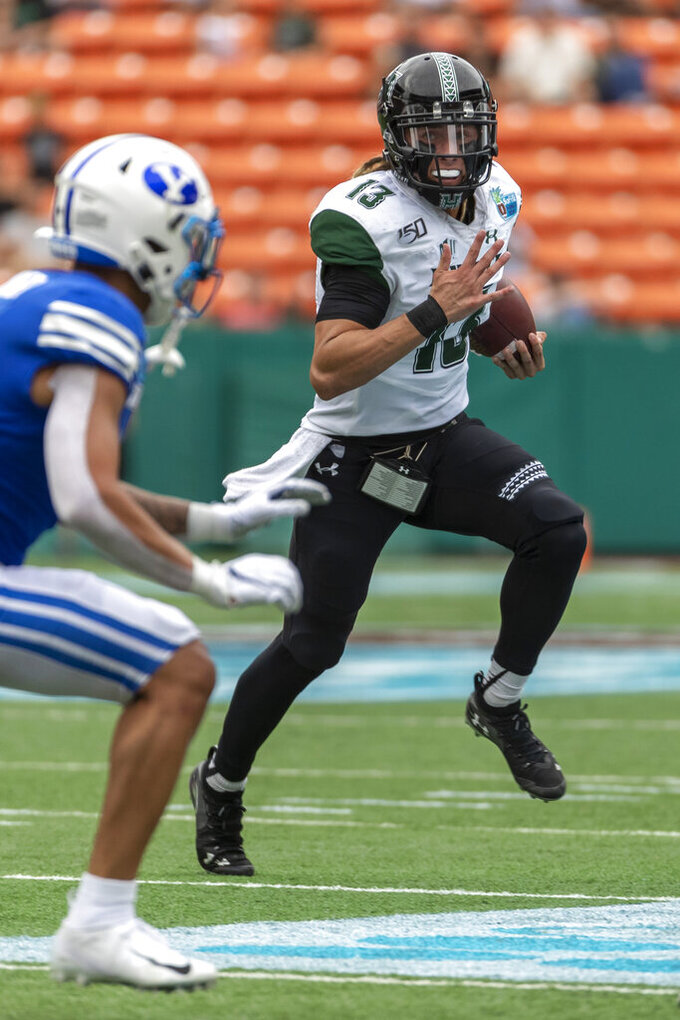 Hawaii quarterback Cole McDonald (13) runs with the football during the first half of the Hawaii Bowl NCAA college football game against BYU, Tuesday, Dec. 24, 2019, in Honolulu. (AP Photo/Eugene Tanner)

HONOLULU (AP) — Hawaii coach Nick Rolovich had this Hawaii Bowl all figured out, except for the details.

He told his players there would be times when beating BYU seemed out of reach, but he wanted them to expect to win the game in the fourth quarter. And that's what happened Saturday in Aloha Stadium, a 38-34 victory for their first victory over the Cougars since 2001.

Rolovich just couldn't have scripted how it would happen.

Hawaii scored 31 points by halftime against a BYU defense that had given up more than 30 points in a game once this year, on the road against Washington. The Warriors were blanked so badly in the second half they didn't even get into the red zone until their final possession.

And then, Cole McDonald took them 71 yards in three plays, capping off a magnificent Christmas Eve with a 24-yard touchdown pass to Nick Mardner with 1:17 remaining.

Khoury Bethley grabbed his second interception of the game — and the season — to stop BYU's last chance and give Hawaii only its sixth 10-win season in school history and the first since 2010.

“It sure wasn't looking that good,” Rolovich said. “To get a 10-win season by beating BYU, it's hard to write anything better.”

McDonald finished with 493 yards passing and four touchdowns, taking him over 4,000 yards for the season. He constantly burned the BYU secondary with the deep ball, and he was at his best at the end.

BYU (7-6) took its only lead of the game on a 20-yard field goal early in the fourth quarter. The Cougars had a chance to run out the clock until Zach Wilson was hurried and threw incomplete on 3rd-and-2.

That gave Hawaii one last opportunity, all it needed.

McDonald had an idea about what the defense was trying to do, and he manipulated the safety by looking right before coming back to the left to find Mardner alone for a 38-yard gain down the left sideline. On the next play, he found Mardner on a post and led him perfectly. Those were the only two catches Mardner had for the game.

“I was nervous and excited,” McDonald said. “It was destiny for us.”

Rolovich played for Hawaii in 2001 when it last beat BYU, back when both were in the Western Athletic Confernce. This was the first time they met in a bowl game, with Hawaii (10-5) designated the visiting team on its home field.

BYU wasted a solid game by Wilson, whose father grew up in Hawaii. Wilson threw for 274 yards and ran for 72 yards and two short TDs to help the Cougars rally in the first half.

BYU's last chance ended when Bethley picked off Wilson for the second time, and the celebration was on.

McDonald finished 28 of 46, and he did most of his damage in the first half by throwing for 331 yards and three scores. Of the four touchdown drives, the shortest was 40 yards. That one followed Bethley's first interception. Two plays later, McDonald found Jared Smart on a post route with a perfectly thrown pass that made it 14-0.

Wilson brought the Cougars back, leading them on touchdown drives of 73, 75 and 75 yards, the last one ending on Micah Simon scoring on an 11-yard reverse.

“We knew they had a dynamic offense,” BYU coach Kalani Sitake said. “We knew he had to be at our best. Obviously, we didn't make enough plays to win the game. The big plays were the issue, even at the end of the game.”

Hawaii: McDonald used the middle of the field and was not afraid to go deep on a BYU defense that had been stubborn against the pass most of the year.

BYU: The Cougars had great balance with the run (231 yards) and pass (274 yards). But they were susceptible to the deep ball all game, and it cost them in the end.

BYU's front line was so dominant that Hawaii finished with 2 yards rushing on 27 carries. The longest run of the game was a scramble by McDonald for 9 yards on the play before his two passes to Mardner.