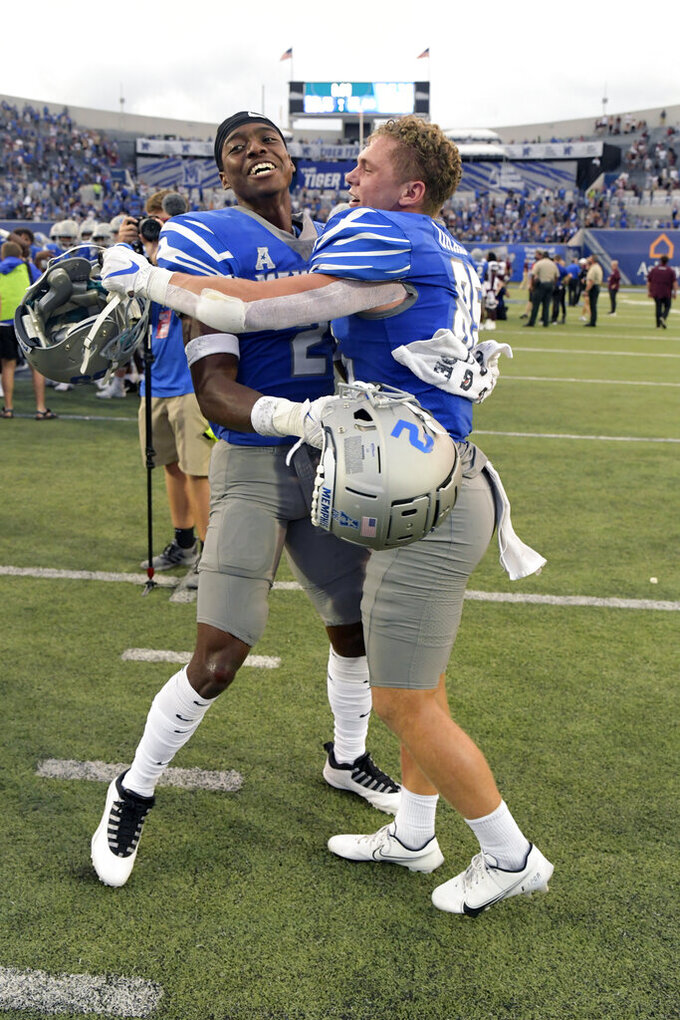 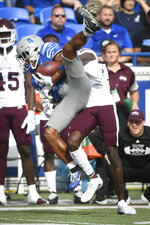 MEMPHIS, Tenn. (AP) — Calvin Austin scored three second-half touchdowns including a questionable 94-yard punt return in the fourth quarter as Memphis rallied for a 31-29 victory over Mississippi State on Saturday.

The victory and Austin’s punt return were part of a wild final six minutes that included onside kicks, penalties, reviews, and other questions such as whether Austin could return the punt on which he scored or if the ball was dead.

The Southeastern Conference issued a tweet after the game, arguing the punt return should have been reviewed after the back judge, part of an SEC officiating crew, had signaled to stop the clock after the punted ball stopped moving. The signal apparently went unseen.

In the end, Memphis (3-0) escaped with the victory thanks to a 51-yard field goal from Tigers kicker Joe Doyle with 2:02 left. A two-play drive from Mississippi State (2-1) after the field goal was capped by a 36-yard touchdown from quarterback Will Rogers to Makai Polk. But Rogers run for the two-point conversion failed, preserving the Memphis victory.

“We talk about that nobody is able to come into our house and gets away with anything,” Memphis coach Ryan Silverfield said. “Our guys understand how important it is. Look, we’ve been down before, just like we were for this game. But our guys believe. And there’s something special about playing in the Liberty Bowl.”

But the first half didn’t bode well for the Tigers. Their explosive offense was held in check and they trailed 17-7 at the break.

Austin scored on a pair of second-half passes from Seth Henigan – of 21 and 25 yards -- before his punt return with 5:36 left. On the play, a Mississippi State player knocked the ball back into the field of play at the goal line.

As the ball was lying on the turf, Austin picked up the ball and headed down the right sideline, the speedster outrunning the surprised Bulldog defenders. That gave Memphis a 28-17 lead.

“I mean, the ball’s live,” Bulldog coach Mike Leach said. “Just because you touch it, they usually whistle it. You know. We’ve got to pick it up and hand it to the ref.”

Leach, after being told about the back judge apparently whistling the play dead, said the game film would be reviewed.

For Austin’s part, he was well aware of the situation, saying he and his father talk about such situations and Memphis coaches have emphasized it also.

“As soon as I saw the dude try to catch it and he dropped it and I was looking and waiting to see if someone was going to hand it to the officials,” Austin said, adding “They touched it and let it be. As soon as I saw that, I sprinted to the ball and then I could just get it and run with it.”

The Bulldogs would score with just more than three minutes left in the game on a pass from quarterback Rogers to Malik Heath. But the final Mississippi State touchdown pass from Rogers to Polk wasn’t enough.

Rogers completed 50 of 67 passes for 419 yards and three touchdowns.

In the end, Mississippi State had 468 yards of offense to 246 for Memphis.

“Statistically, you’d think it was a big score in our favor compared to a little score,” Leach said, “but statistics don’t count for anything.”

MISSISSIPPI STATE: The Bulldogs started fast, but the offense struggled early in the third quarter and into the fourth. The offensive punch came back late in the game, but Mississippi State fell short when the final two-point conversion failed. “I think Memphis played more mature than we did. I don’t even know exactly what that means. But they were more advanced than we were,” Leach said.

Memphis: While the Tigers struggled early in the game, Austin was electrifying after halftime with his receiving and the punt return. The victory kept Memphis 3-0 as it heads into American Athletic Conference play.

Memphis: Host Texas at San Antonio next Saturday, the last non-conference game before entering American Athletic Conference play the rest of the season.