Michigan WR Ronnie Bell out for season with knee injury 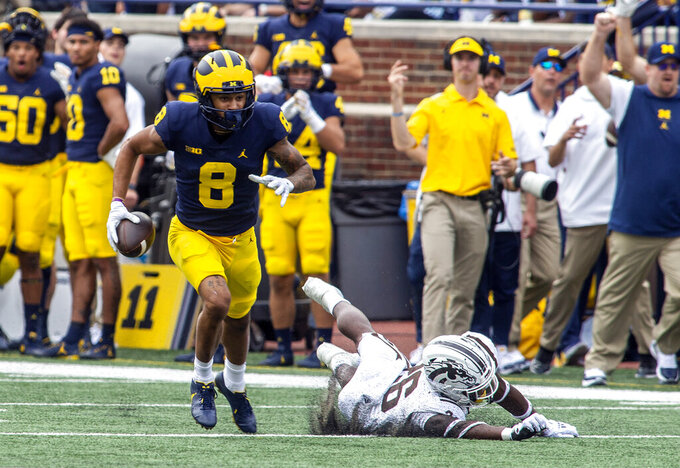 ANN ARBOR, Mich. (AP) — Michigan Stadium was silent when Ronnie Bell went down with an injury in the season opener as more than 100,000 fans feared the worse.

It was almost as if they knew what was coming.

Two days later, coach Jim Harbaugh confirmed that Bell is out for the year with a knee injury.

“It's a shame," Harbaugh said Monday.

Bell had a 76-yard touchdown reception and returned a punt 31 yards before injuring his right knee in a 47-14 win over Western Michigan.

“It will be very difficult to replace Ronnie Bell,” Harbaugh said. “Really tough. Seasoned. Experienced. Tremendous blocker. So competitive and such a gamer.

“Now somebody has to try to fill those shoes.”

Harbaugh appeared to get defensive when asked more than once by reporters about having Bell, perhaps his best player, on special teams.

The Huskies likely will drop out of The Associated Press college football poll on Tuesday after becoming the first ranked FBS team in five years to lose to a FCS team, falling to Montana 13-7.

Washington will face Michigan without Bell, who was the team’s leading receiver last season and an All-Big Ten honorable mention selection in 2019 after leading the team in receiving.

Bell, who started 17 of 33 games, has 83 career receptions for 1,380 yards and five touchdowns. His absence leaves a void on and off the field.

“Everybody has to step up,” receiver A.J. Henning said. “That’s a major loss.”

Harbaugh expects Bells to keep leading from the sideline. The former star quarterback recalled having a season-ending injury at Michigan, when then-assistant coach Lloyd Carr encouraged him to stay involved.

“The best way to not feel left out is to help out," Harbaugh said.

Cornelius Johnson and Mike Sainristill, with four starts each, have the most experience among Michigan's remaining receivers.

Johnson has 22 career catches for 330 yards with four touchdowns. Sainristill has made 16 receptions for 224 yards and three scores.

Henning, who had a 74-yard run for a touchdown in the opener, is expected to fill in for Bell as the team's punt returner and likely will have an increased role in the passing game.

Roman Wilson also will have an opportunity to play more, adding to his nine career catches for 122 yards and a touchdown.

Graduate transfer Daylen Baldwin, who previously played for Jackson State and Morgan State, showed his big-play ability in his Michigan debut with a 69-yard touchdown catch.

In addition to being productive on the field, Bell was popular off it with teammates who respected his work ethic and attitude.

“He's like the heart and soul of the wide receiver room," Henning said. “We're all going to do our job, stepping up and filing that role. All the receivers, and everybody on offense, wants to do it for him."