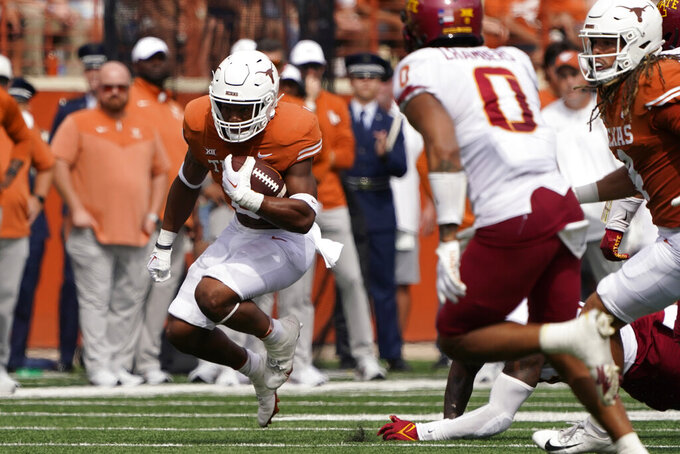 Running backs have been dominant in the Big 12 this season.

Five of the top 13 Power Five conference rushers in yards per game hail from the league. Kendre Miller is a key reason unbeaten TCU has a shot at reaching the College Football Playoff. Texas' Bijan Robinson is projected by many to be a first-round draft pick. Deuce Vaughn — a 5-foot-6 dynamo — has fueled Kansas State's surprising run into the Big 12 title race. And Oklahoma's Eric Gray and Baylor's Richard Reese both average nearly 100 yards rushing per game.

Miller averages 106.4 yards rushing per game and has scored 11 touchdowns for the 8-0 Horned Frogs. He ran for 120 yards and a touchdown in last week's 41-31 win over West Virginia.

“Kendre’s stepped up like you hoped he would and I think has shown everybody, certainly, what he’s capable of,” TCU coach Sonny Dykes said. “I think (he is) one of the best running backs in college football -- just what he does and how he does it. And he’s certainly incredibly valuable to us and the way that we use him. He’s just a combination of power and balance and speed and can make big plays.”

Miller arrived at TCU with Zach Evans, a five-star recruit and the highest-ranked ever signed with Gary Patterson. Evans transferred to Ole Miss after TCU’s coaching change, and Miller has stepped up by rushing for at least 100 yards in five of his past six games.

“When your number is called, you’ve just got to produce, and I think it’s a big deal to do it week in and week out, so that’s where I try to be with my game,” Miller said. “I try to stay consistent and do it every week, so that (separates) the great ones from the good ones.”

Miller has rushing touchdowns in all eight games this season and nine consecutive games overall going back to last season's finale. It's the second-longest streak in school history, trailing only NFL Hall of Fame running back LaDainian Tomlinson’s 15 in a row from 1999-2000. Among active Power Five running backs, Miller’s career 6.92 yards-per-carry is the most, just ahead of Evans’ 6.86.

Texas' Robinson leads the conference with 115.0 yards rushing per game. When his 280 yards receiving are added, his contribution jumps to 150 all-purpose yards per game – good for seventh nationally.

Vaughn is second in the league with 112.8 yards rushing per game and has 130 yards receiving.

“He’s got great hips and feet and vision,” Oklahoma defensive coordinator Ted Roof said before his Sooners allowed 116 yards rushing to Vaughn. “He’s got a lot of patience too. He’ll stay back there, wait for somebody to get nosy and jump out of their gap and then here he goes. At the same time, he’s a weapon in the throwing game as well too. They get very creative in how they get him the ball.”

Gray has become Oklahoma's most consistent offensive player. He has rushed for at least 100 yards in five of his eight games. He averages 99.5 yards per contest. His 6.8 yards per carry rank seventh nationally.

Reese — a freshman — is averaging 98.9 yards rushing per game for Baylor, and he leads the league with 12 rushing touchdowns.

West Virginia’s CJ Donaldson and Tony Mathis, Kansas’ Devin Neal and Oklahoma State’s Dominic Richardson also have had great moments and rank in the Top 10 in the league in rushing yards per contest.

“I think the league is really good,” Dykes said. “I mean, obviously everybody’s kind of got backs that fit their personality. And they’re all different. … So you just look around the league, there’s just a lot of really good running backs.”

AP Sports Writer Stephen Hawkins in Fort Worth, Texas, contributed to this report.