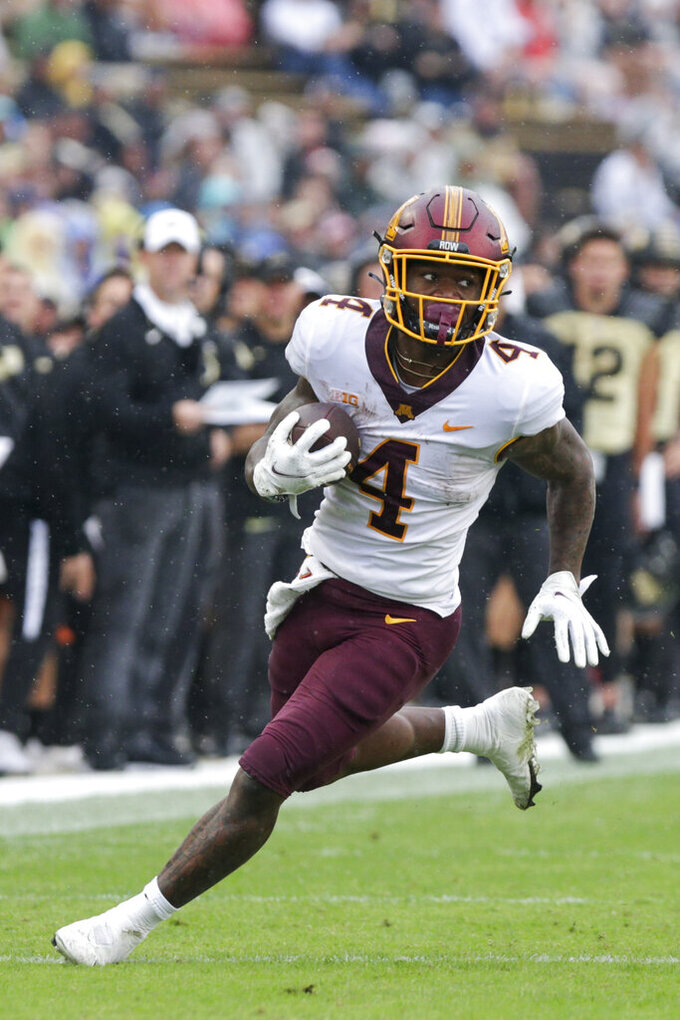 MINNEAPOLIS (AP) — Minnesota running back Trey Potts will miss the remainder of the season with an undisclosed injury serious enough to keep him hospitalized for six days after it occurred in the last game.

Coach P.J. Fleck said Monday that Potts was “doing very well” and expected to be present at the practice facility this week to visit with the team.

“These players as football players is one thing, but when you’re talking about them as people, that’s what ultimately matters,” Fleck said. “I appreciate everybody’s concern. I know he and his family do as well.”

Fleck declined to reveal any specifics about what happened to the third-year player, who left the field late in the fourth quarter Oct. 3 at Purdue without any obvious sign of trouble. Fleck praised the effort and expertise of the medical staff for quickly determining Potts needed to go to a hospital after the initial evaluation on the sideline became a “really scary” situation.

Athletic director Mark Coyle, head athletic trainer Mike Sypniak and team Dr. David Jewison stayed in Indiana overnight to support the native of Williamsport, Pennsylvania, while family members rushed to join him. Potts was transferred to a larger hospital at one point last week. He traveled back to Minnesota after being discharged Friday.

The door has not closed on Potts resuming his career next season, Fleck said.

“I think that’s positive for him if football is something that he wants to do with the options that he has,” Fleck said. “I think that if that was the only option, that would have been said by now.”

Potts is second in the Big Ten with an average of 110.4 rushing yards per game. He finished his year with 552 yards on 112 carries, after taking the lead role following a season-ending lower leg injury to Mo Ibrahim — an Associated Press preseason second team All-America selection — in the opener.

The Gophers (3-2, 1-1) host Nebraska on Saturday. True freshman Mar'Keise Irving figures to get the first crack at carrying the ball moving forward, but Fleck said the Gophers will likely use a committee approach with Ky Thomas, Cam Wiley and Bryce Williams also in the mix.

Irving rushed 15 times for 89 yards at Colorado and had a 41-yard kickoff return against Miami of Ohio last month.

“These guys are gaining valuable experience, not only for now but their futures,” Fleck said. “That is incredibly helpful for their development. Whether they got it in different times throughout the year or whether they get it in a starting role, in my opinion it can only help them.”