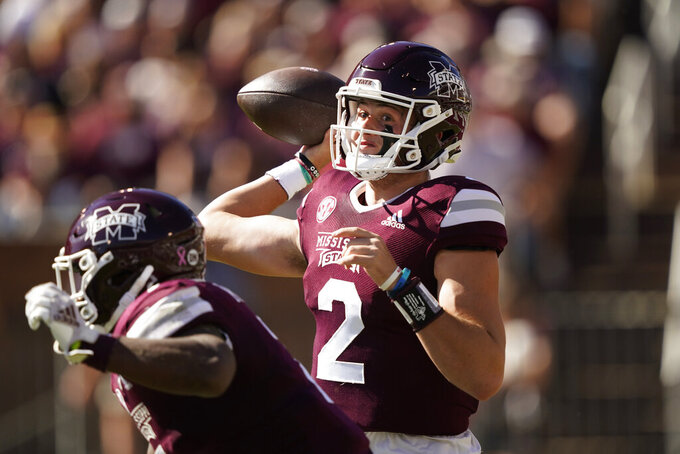 STARKVILLE, Miss. (AP) — Offensive opportunities were there for the taking by No. 17 Texas A&M. Mississippi State’s defense was also there to deny the Aggies at almost every turn.

The Bulldogs forced A&M into four turnovers, including three inside the red zone, and took advantage in a 42-24 victory on Saturday.

Decamerion Richardson scooped up Emmanuel Forbes’ critical third-quarter field goal block and returned it 50 yards for the touchdown to give the Bulldogs a 21-3 lead. The Aggies (3-2, 1-1 Southeastern Conference) got no closer than 11 as MSU’s defense denied A&M inside the 20 all game long with big plays.

“We’ve been practicing all week and when I got my chance, I just took advantage of it and blocked it,” Forbes said. “It was a real big momentum change. The offense had just got a turnover and we had to pick them up and we did that.

“I saw (Richardson) pick it up and I just wanted to go have fun with him in the end zone. I’d do anything to help my brother out.”

The first takeaway came early in the second quarter when Devon Achane fumbled on the 6. MSU responded with a 94-yard, 11-play drive ending with Will Rogers’ 5-yard touchdown pass to Rufus Harvey.

Leading 14-0 just before halftime, the Bulldogs' defense came through again as Nathaniel Watson forced Aggies quarterback Max Johnson to fumble in the red zone. Forbes’ blocked field goal in the third quarter put an exclamation point on the game for MSU and their first SEC West win.

“The biggest thing was we just played together. Early on we played too close to the vest and as we opened up, we had more success,” MSU coach Mike Leach said. “They had a tough time teeing off on one thing. A&M is tough.

“They have some really good players and some of the top recruits in the country. The biggest thing is doing your job and I thought we were.”

Meanwhile, the Aggies were frustrated on offense. Johnson was 18 of 25 passing for 201 yards and a touchdown before leaving in the fourth quarter with a hand injury. MSU sacked Johnson four times and posted six tackles for loss, led by 1.5 sacks by backup linebacker JP Purvis.

“Mississippi State played a good football game and is deserving to win,” A&M coach Jimbo Fisher said. “We had critical errors in all three phases. We didn’t play well enough. We had opportunities to make it, but we didn’t get off the field on defense, we didn’t hit those red zone chances on offense and had the blocked kick. We have to clean up those mistakes and get better.”

Forbes then made two interceptions late in the fourth quarter and capped the game with a 33-yard pick-six. Fellow cornerback Richardson had nine tackles to lead MSU and got his touchdown on the blocked kick.

The win for Leach moved him to 9-4 lifetime over the Aggies between Texas Tech and MSU. The Bulldogs have won five of the last seven in the series and Leach now has six wins over ranked opponents in his three years in Starkville, moving above .500 at MSU overall for the first time since arriving in 2020.

Texas A&M is likely out of the rankings with a second loss. Mississippi State could be close to getting in.

Texas A&M continues a lackluster start to the year, which has included a home loss to Appalachian State and now on the road to the Bulldogs. Jimbo Fisher’s offense has taken a lot of the criticism early, and Saturday is likely to spark more as the Aggies struggled again.

Mississippi State was on the verge of the Top 25 when the Bulldogs went to Baton Rouge against LSU but missed a chance for the win. After consecutive wins including a victory over the ranked Aggies, MSU is once again a team to watch in a crowded SEC West.