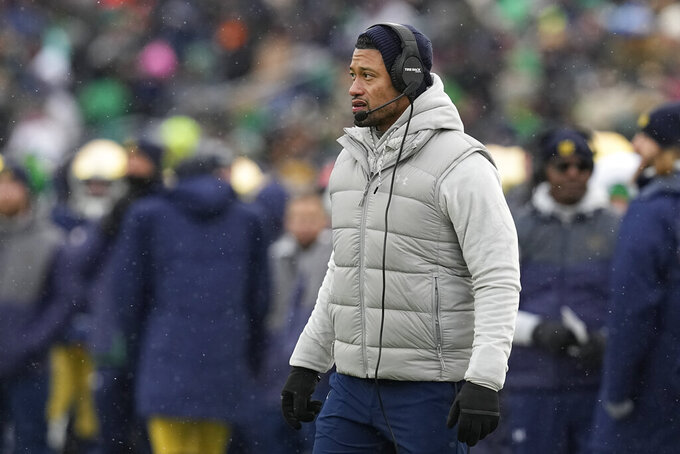 LOS ANGELES (AP) — No. 5 Southern California's swift transformation from a program in disarray to a revitalized powerhouse in its first season under Lincoln Riley has been one of the most impressive developments of the college football season.

Although No. 13 Notre Dame took slightly longer to get rolling under fellow first-year head coach Marcus Freeman, the Fighting Irish are back in their usual formidable form and even picking up speed.

But a big season is not complete at either school without a memorable edition of these teams' famed intersectional rivalry.

They'll get their moment Saturday night in the 93rd meeting for the Jeweled Shillelagh amid all the other important trappings that frequently make this matchup so special: national title implications, upset potential and elite players on both sidelines at the venerable Coliseum, which has been hosting these blue-blood programs since 1926.

“I think you have to embrace and enjoy being in this moment, enjoy competing at this level,” Riley said. “Our team gets excited to play teams like Notre Dame. There’s no question about it. It’s fun playing really good competition in cool venues with a lot of things on the line. That’s so much fun. Let’s embrace it and make sure we keep getting better. I think they have a sense for it, and we’re not going to minimize it.”

USC (10-1) has clinched a spot in the Pac-12 title game Dec. 2 after going 8-1 in conference play, but its chances of breaking into the College Football Playoff from its current No. 6 spot in the playoff rankings hinge on beating the Irish (8-3).

Notre Dame won't be in the four-team tournament this year, but a win over the Trojans would be nearly an ideal punctuation on a regular season of remarkable growth under Freeman. After an 0-2 start, the Irish are rolling toward bowl season with five consecutive victories, nine of 10 overall and a surging sense of their worthiness to be on college football's biggest stages.

“There’s a different feeling about this one, and I can feel it amongst our program and our players," Freeman said. "I knew it last year, but this year, being at the end of the year, at USC, you can really feel it.”

USC quarterback Caleb Williams has leaped into the Heisman Trophy race by commanding the nation's attention with a spectacular series of performances down the stretch, highlighted by 503 total yards and three touchdowns in the Trojans' thrilling 48-45 victory at UCLA last week.

USC has relied on Williams' high-powered offense to cover for its less-dominant defense, but Notre Dame's defense has yet to allow an opponent 400 total yards this season, and only four opponents have topped 200 yards passing. The stage is set for a showdown.

The Irish's 400-yard streak “is hard to do in college football,” Riley said. “They’ve got good players at all levels. You can tell they’ve recruited there for many years, and they’ve built a talent base, and that shows up.”

WAKE UP THE ECHOES

This rivalry is among the most compelling in college football, both for its history and its endurance. Only World War II and the COVID-19 pandemic have interrupted it, and this game will be Notre Dame’ first since 2018 at the Coliseum, where a plaque honoring Knute Rockne has hung in the Peristyle since 1955. Both teams are ranked in the matchup for the first time since 2017, and Notre Dame leads the rivalry 17-14-2 during games in which both teams are in the AP Top 25.

Notre Dame's rushing offense is formidable, with sophomores Logan Diggs and Audric Estime leading a group that has topped 200 yards on the ground in six games this season. USC's run defense has been better than its pass defense — no surprise in the air-oriented Pac-12 — and UCLA is the only opponent in the Trojans' last eight games to get more than 200 yards rushing.

If the Irish can't run the ball or fall behind, Drew Pyne will have to throw against a Trojans defense with an FBS-leading 18 interceptions and an uncanny season-long knack for timely takeaways. USC leads the FBS with a plus-20 turnover margin.

Riley and Freeman are both in the rivalry for the first time as head coaches, although Freeman was an assistant last season when the Irish drilled the Trojans 31-16 in South Bend. The last time two first-year head coaches at the schools met was in 2010, when Brian Kelly’s Notre Dame beat Lane Kiffin’s Trojans 20-16 at the Coliseum in a rain-soaked game best remembered for a horrific drop by USC's Ronald Johnson in the waning moments.

The most fascinating matchup when Notre Dame has the ball might be USC defensive end Tuli Tuipulotu going against the Irish offensive line bookended by tackles Joe Alt and Blake Fisher. Tuipulotu is a Lombardi Award finalist and one of the nation's top defensive players, ranking third in the FBS with 11 sacks and making countless big plays on the edge. Alt and Fisher anchor a line that has allowed just 17 sacks all season.