No. 1 LSU has sights on ‘Boot,’ SEC West title, vs Arkansas 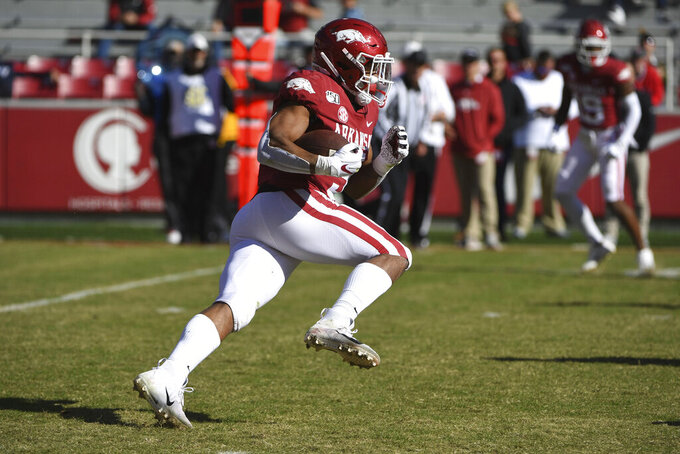 Arkansas running back Rakeem Boyd finds a hole in the Western Kentucky defense as he runs for an 86-yard touchdown during the second half of an NCAA college football game, Saturday, Nov. 9, 2019, in Fayetteville, Ark. (AP Photo/Michael Woods) 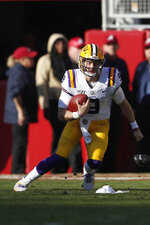 With a victory, LSU would win the SEC Western Division, thereby clinching its sixth trip to the conference title game since that game’s inception in 1992. The Tigers also need to win to remain atop the polls and maintain an inside track to the College Football Playoff. Arkansas is trying to establish positive momentum for its proud but struggling program in its first game since the firing of coach Chad Morris.

Arkansas: WR Treylon Burks leads the Razorbacks in yards receiving with 389 on 25 receptions. He also has rushed for 28 yards and is the primary punt returner, fielding 12 for an average of 10.8 yards.

LSU: QB Joe Burrow is the leading candidate for the Heisman Trophy. His 3,687 yards passing and 38 TDs passing both are LSU single-season records and his 78.6 completion percentage is highest in the nation.

The game between these teams has been known for 23 years as the “battle for The Boot,” a 24-karat gold trophy in the shape of the states of Arkansas and Louisiana. ... Arkansas plays for the first time this season with Barry Lunney Jr. serving as interim head coach. Lunney is in his seventh season with the Razorbacks. He has coached the tight ends unit since 2013 and was in his first year as special teams coordinator. ... Lunney started a school-record 40 games at QB for the Razorbacks from 1992-95. ... Arkansas ranks 106th nationally in scoring (22.3 points per game) and total offense (353.5 yards per game), while LSU ranks second nationally in scoring (47.8 ppg) and offense (556 ypg). ... Arkansas’ last win over LSU came in Baton Rouge by a score of 31-14 in 2015. ... LSU is 11-3-1 vs. Arkansas in games played in Baton Rouge.