No. 11 Penn State to lean on defense as offense develops 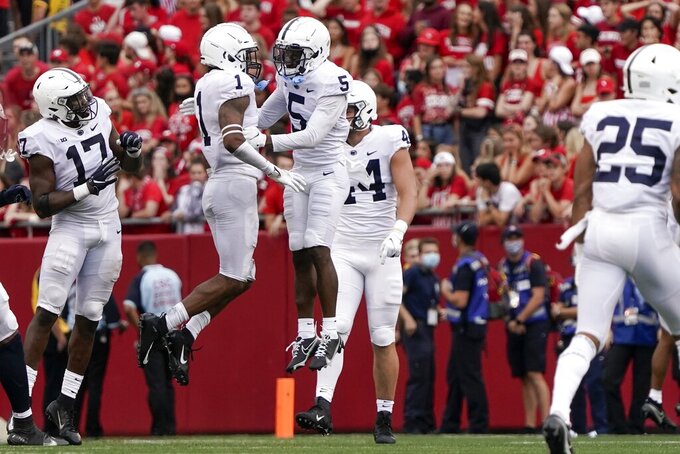 STATE COLLEGE, Pa. (AP) — Jaquan Brisker watched his team punt time after time on Saturday and guessed he and the rest of the Penn State defense could be in for a long day.

The senior safety was right.

No FBS defense spent more time on the field than No. 11 Penn State (1-0, 1-0 Big Ten) in the opening week. Against 95 plays over nearly 43 minutes, the Nittany Lions held Wisconsin to 10 points and 3.8 yards per rush. They forced six punts and three turnovers, sacked the quarterback twice and had a handful of hurries.

They also blocked a field goal and limited the Badgers to one score — a goal-line touchdown plunge — in four red-zone trips.

“Our defense played championship-level defense all day long,” coach James Franklin said. “I thought it was impressive we were able to go on the road in a very hostile environment, noisy, rainy, 11 a.m. kick, and I felt like we were prepared for all of it.”

Similar defensive efforts will come in handy for a program looking to develop its offense. Penn State punted on five of its first six possessions at Camp Randall Stadium and turned the ball over on downs before finally connecting on a 49-yard touchdown pass in the third quarter.

The Nittany Lions will hope for a more consistent attack when Ball State (1-0) visits Beaver Stadium on Saturday.

If they don’t get it? Well, the defense presumably has them covered.

“We kept cool heads the whole time,” cornerback Joey Porter Jr. said. “We knew our offense was going to come around, it wasn’t going to be long until they started rolling. We never had any doubt.”

This group has little reason to doubt itself, either.

It’s loaded with experience and led by stars who can play multiple positions. Linebacker-turned-end Jesse Luketa’s cross-training came in handy when Ellis Brooks — who still led the team in tackles — was ejected for targeting.

“Jesse’s a very important part of the defense,” Brisker said. “Making quick moves, getting in the backfield, jumping all over the field showing his vertical, things like that, showing that he’s going to be be a force at the defensive end position.”

Penn State also has a unique set of safeties in Brisker and Ji’Ayir Brown. The two played together at Lackawanna Community College before transferring to Penn State.

Their cohesion was on display with nine combined tackles and both of Penn State’s fourth-quarter interceptions, both throws to the end zone. Both players moved in and out of the box to help in run support.

Defensive coordinator Brent Pry has assigned linebackers and defensive backs hybrid responsibilities in the past. Over the last two seasons, Penn State has gotten 20 sacks from players at those positions.

Those possibilities are exciting to the defensive backfield’s youngest player.

“Having that chemistry back there, having them two roaming around,” Porter said, “it’s a scary secondary.”

Up front, Penn State could be even more effective if new addition Arnold Ebiketie keeps up the pace he set in the opener with a sack, seven tackles and a blocked field goal.

His best play came on the 94th defensive snap for the Nittany Lions, when Ebiketie hurried quarterback Graham Mertz and forced him to take an intentional grounding call.

Brown’s interception on the next play sealed the game.

“We had a lot of guys who were hungry and eager to get the win,” Brown said. “We were not going to let anything bad happen on our terms. We were going to control the game on defense. We decided that as a unit and we went out there and proved it to ourselves that we were going to do it.”