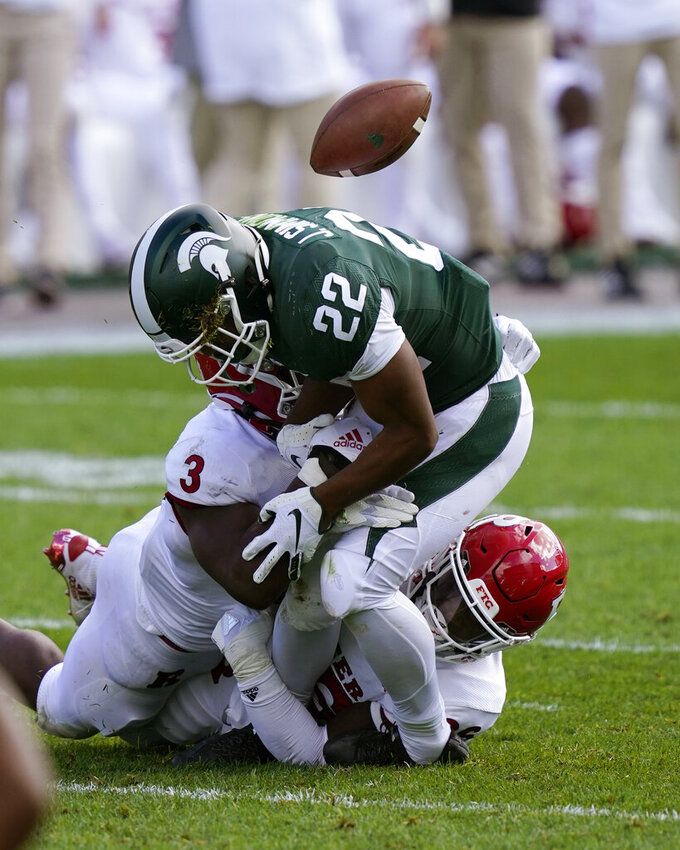 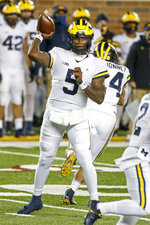 ANN ARBOR, Mich. (AP) — Toward the end of his video conference with reporters this week, Mel Tucker was asked point blank if he was intentionally avoiding using his next opponent's name.

“I don’t think there’s any question from anyone who we’re playing this week," Tucker said. "It’s the school down the road. I think we all know who that is.”

That would be 13th-ranked Michigan — although Tucker, the new Michigan State coach, went with “school down the road” or “school up the road” at times. As rivalry trolling goes, this was fairly tame, and after a season-opening loss to Rutgers last weekend, the Spartans may want to show more on the field before they start slinging any real insults at future opponents.

Indeed, this year's version of Michigan State vs. Michigan feels a little more subdued — and not just because it's being played in the second week of a truncated season in a fan-free environment Saturday at the Big House. There's also the fact that the Spartans are reeling. Even before the loss to Rutgers, this figured to a tough season after coach Mark Dantonio's retirement.

Dantonio had plenty of success against Michigan — and there was plenty of hostility between the programs over the course of his tenure — but the Wolverines have won three of the last four meetings, including a 44-10 rout in Ann Arbor last season that kept the Paul Bunyan Trophy with Michigan.

Michigan State needs to show it can be competitive for this rivalry to return to where it was for most of the past 15 years, but no matter who is coach, motivation should be no issue for the Spartans.

“I've been very fortunate as a player, very fortunate as a coach to be a part of these rivalry games, whether it's Auburn-Alabama or Georgia-Florida, Ohio State-Michigan, Michigan-Michigan State, Chicago-Green Bay, Cleveland-Pittsburgh,” Tucker said, using Michigan's actual name that time. “In all of those rivalry games, we've embraced those games, and treated them special."

It'll be special from the other side too.

“It’s state championship week. The way I view this game, it’s like you’re in high school and you’re playing your No. 1 rivalry," Michigan receiver Mike Sainristil said. "We’ve got to keep the trophy here. You never want someone to come into your home and take what’s yours.”

Michigan has a streak dating to 1975 of games at Michigan Stadium with crowds of at least 100,000. That will not be extended this weekend, and it will certainly be unusual to see this iconic venue so empty for the Wolverines' home opener.

“It’s different, but it’s still a game," Michigan coach Jim Harbaugh said. "The red blood is pumping, and it’ll be really pumping for both sides in this game. No question about that.”

Michigan State linebacker Antjuan Simmons suggested that the passion both teams bring to this rivalry might be even more obvious without the crowd.

Both teams had to replace experienced quarterbacks in Shea Patterson and Brian Lewerke. Joe Milton started for Michigan last weekend and was solid in a season-opening 49-24 victory over Minnesota. Rocky Lombardi threw for 319 yards for Michigan State, but he was intercepted twice and lost a fumble as his team turned the ball over seven times.

The team with the most yards rushing has won 45 of the past 50 games in the series, although a couple exceptions to that trend came recently in 2015 and 2016.

Only one Michigan State coach has beaten Michigan in his first attempt. That was Nick Saban, who led the Spartans to a 28-25 victory over the Wolverines on Nov. 4, 1995.