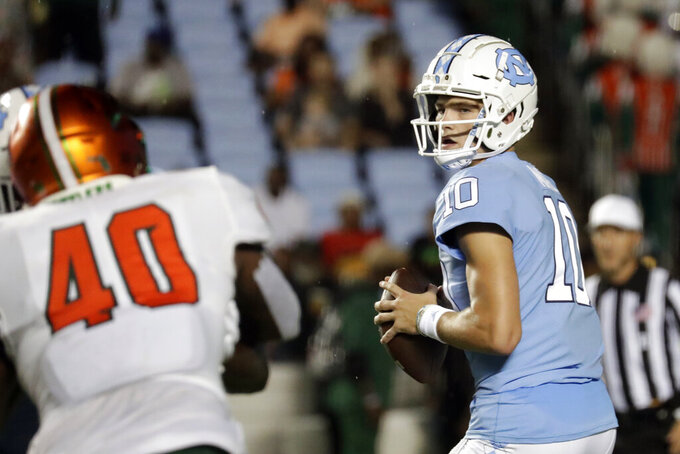 Here are things to watch in the Atlantic Coast Conference in Week 1:

Florida State vs. LSU in New Orleans. The Seminoles and Tigers meet Sunday in a matchup of teams from neighboring power conferences. It marks the first game for LSU under Brian Kelly, who made the surprise move to leave Notre Dame after last season.

And it represents a marquee-name opponent for the Seminoles under Mike Norvell, who is just 9-13 in his first three seasons and is trying to gain some traction at FSU. The Seminoles got off to a good start this season with a 47-7 win against Duquesne in last weekend's “Week Zero” opener.

No. 13 North Carolina State faces a tricky opener Saturday at East Carolina, which is sure to have a testy and rowdy home crowd eager to stick it to an instate power-conference foe.

Dave Doeren's team is viewed as a contender for the league title with a shot for only the second season with double-digit wins. But that starts with visiting Greenville, located about 90 miles east of the Wolfpack's Raleigh home.

ECU, an American Athletic Conference program, is 4-1 against N.C. State at home. Most recently that included a 33-30 win in September 2016, along with a 2010 overtime win that ended when the Pirates picked off eventual NFL star Russell Wilson at the goal line.

Georgia Tech didn't get an easy start to the schedule with a home matchup against No. 4 Clemson. The Yellow Jackets are 22 1/2-point underdogs according to FanDuel Sportsbook, as they open a critical fourth season under Geoff Collins against the ACC preseason favorite.

The ACC's five teams inside the AP Top 25 poll — No. 16 Miami, No. 17 Pittsburgh and No. 22 Wake Forest join Clemson and N.C. State — matches the league's highest total set four previous times, most recently in 2017.

The Tigers' No. 4 ranking marks the seventh straight year that they open in the top 5, while the Wolfpack has tied its previous program preseason high set in 1975.

North Carolina got a five-TD showing from quarterback Drake Maye in his first career start last weekend against Florida A&M. Things will be tougher this week for the second-year passer when the Tar Heels face instate foe Appalachian State in their first trip to Boone on Saturday.

Maye is the first player in program history to throw five TD passes in his starting debut.