No. 13 Oregon, Stanford have an unpredictable history 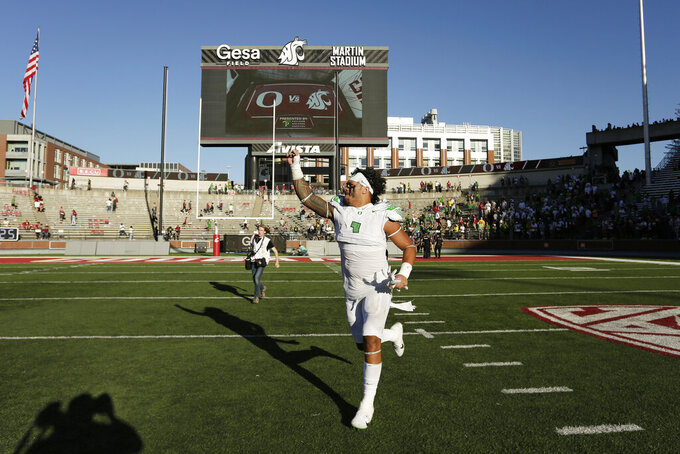 So much has changed for Stanford and No. 13 Oregon since the 2018 season, but the memories are still vivid for Cardinal safety Kendall Williamson.

Williamson made his college debut against the Ducks and he admittedly got knocked around a lot. But in the end, Stanford emerged with a 38-31 overtime victory at Autzen Stadium.

“It was my wake up call to college football,” Williamson said. “I mean, I do remember us coming back and winning, that was ridiculous. A ridiculous win, ridiculous to be a part of that. Postgame, we were just so excited. And shutting up those Oregon fans and making the stadium go silent was a beautiful thing."

Stanford also surprised the then-No. 3 Ducks last year with a 31-24 win in overtime, which temporarily derailed the Ducks in their final season under Mario Cristobal. Oregon climbed back up the rankings, but fell to Utah late in the season and then lost again to the Utes in the Pac-12 championship game.

The Cardinal (1-2, 0-2 Pac-12) have had a rough start to conference play, with losses to USC and Washington.

The Ducks (3-1, 1-0) meanwhile, have rebounded from a season-opening loss to Georgia with three straight wins, including last weekend's come-from-behind victory over Washington State. It moved Oregon up two spots in the AP Top 25.

Although he's new, Lanning is familiar with the unpredictable recent history between the two teams. Oregon won handily against the Cardinal in 2019 and 2020.

“The way they just play, the style of play that they have is different. And again, they’ve had a lot of success over the last few years,” Lanning said. "We were able to hit on some of that history with our team and I think our guys are really familiar with the success that Stanford’s had in the past and have a lot of respect for that team.”

Shaw announced that running back E.J. Smith will miss the rest of the season with an unspecified injury.

Smith, the son of Dallas Cowboys great Emmitt Smith, rushed for 206 yards and four touchdowns through the first two games of the season. He missed last week's game against the Huskies.

“This is something that needs to be taken care of now," Shaw said. "And I still expect him to be the special football player that we envision, that he envisions, sooner or later. It’s just not gonna happen this year."

Oregon appealed outside linebacker DJ Johnson's targeting penalty in the game against Washington State. It was denied, meaning Johnson won't play in the first half of Saturday night's game.

The game starts at 8 p.m. local time, 11 p.m. on the East Coast, which certainly doesn't help the Pac-12's profile on the national stage.

Shaw also maintains those late starts are not good for players, especially on the visiting side.

"We'd love to live in a world where we cap start times at 7 p.m. They can cap them at 7 p.m. on the weekend, and cap it at 6 p.m. if you're playing on a Thursday night,” Shaw said. “It's just really difficult coming back for college students at 3 or 4 o'clock in the morning, to have the opportunity to get some rest and get some schoolwork done. I know it sounds typical coming from a Stanford head coach, but I think that's the way it should be. These are student-athletes, they have other responsibilities.”