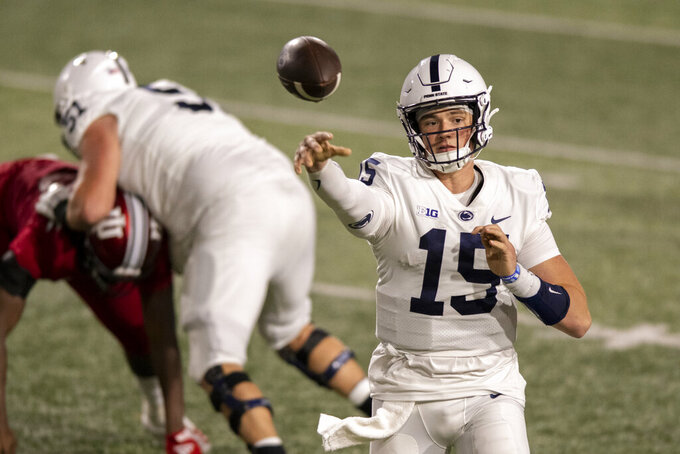 Players and coaches on both sides have said they don’t consider this a real rivalry game considering the Nittany Lions’ series dominance. Still, less than 200 miles separate the campuses and there are off-field implications as each program competes for area recruits. A second straight win at Beaver Stadium would be a huge accomplishment for a Terps team looking to bounce back after losing at Wisconsin last week. The Nittany Lions must keep winning to get to a New Year’s Six bowl.

Maryland QB Taulia Tagovailoa vs. Penn State’s pass rush. Tagovailoa completed 41 of 57 passes for 371 yards the last time he faced Penn State. His ability to extend plays and buy time for his receivers will be key as Penn State’s secondary doesn’t get beat on routine timing routes very often.

Maryland: RB Roman Hemby. The 6-foot, 200-pounder is a physical back who’s averaging 6.17 yards per carry for the season. He has 63 total touches for 391 yards and four touchdowns in the last three games.

Penn State: WR Parker Washington. His former teammate Jahan Dotson shredded Maryland last year with 11 catches for 242 yards and three scores. Washington’s got 22 catches for 279 yards and two touchdowns in the last three games, and the Terps have given up big chunks through the air at times.

Penn State has won six of eight in the series since Maryland joined the Big Ten in 2014. The Nittany Lions averaged nearly 44 points per game in those wins. … Maryland’s 35-19 victory in 2020 came with Beaver Stadium empty amid the COVID-19 pandemic. … Penn State tied a program record with 16 tackles for loss last week against Indiana. … RBs Nick Singleton and Kaytron Allen have eight rushing touchdowns each and are tied with Noah Cain for the program record for freshmen. ... Tagovailoa’s career accuracy rate of 68.3% is fourth in Big Ten history to Northwestern’s Dan Persa (73.5%) and Ohio State’s C.J. Stroud (70.4%) and Dwayne Haskins (70%).