No. 15 UTSA hoping to avoid letdown against Southern Miss 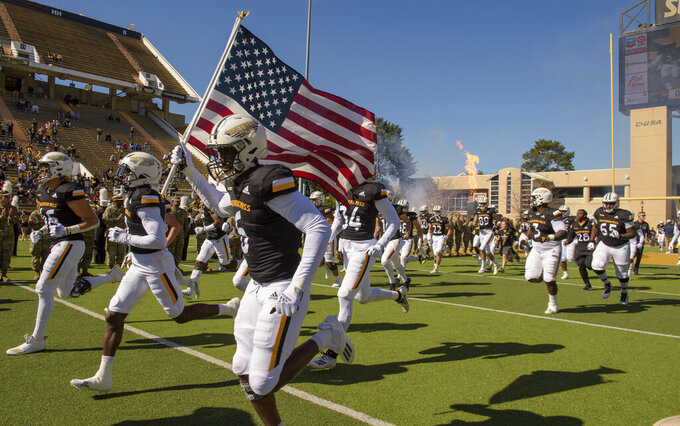 SAN ANTONIO (AP) — Nationally ranked, undefeated and playing at home, UTSA is a heavy favorite against a Southern Mississippi program suffering through its worst season in nearly a decade.

“I can see where you would say that, but our seniors, I just don’t think they will let us do that,” Roadrunners coach Jeff Traylor said.

No. 15 UTSA hosts Southern Miss on Saturday at the Alamodome, its first home game since defeating Rice 45-0 on Oct. 16.

Traylor has relied on the team’s 12 super seniors, players who were granted an extra year of eligibility due to the pandemic. That group, which includes quarterback Frank Harris, has led UTSA to a prolific start.

The Roadrunners are averaging 46.5 points in their past four games and 39.9 points this season. Harris has passed for 2,079 yards, which is 43rd in the nation, and 18 touchdowns.

Junior running back Sincere McCormick has rushed for 10 touchdowns and 1,060 yards, which is seventh in the nation.

While the Roadrunners are rolling, the Golden Eagles are muddling through their worst season since finishing a combined 1-23 in 2012 and 2013. Will Hall is in his first season as coach after Jay Hopson was dismissed last year during a 3-7 season.

The Golden Eagles have 22 turnovers this season and are allowing 30.2 points per game while averaging just 13.7.

How do the Roadrunners guard against a letdown as a 33 1/2-point favorite, according to FanDuel Sportsbook?

“You tell them the truth,” Traylor said. “They don’t have a very good record, let’s be honest. What is their head coach going to tell them? They can save their whole season right now. It could be an unbelievable moment for those guys, right? We can’t control any of that. What can we control? It’s our practice habits.”

UTSA’s inaugural home game on Sept. 3, 2011, drew 56,743 fans to the Alamodome, a record crowd the Roadrunners have not come close to matching. It drew 27,515 for the Rice game, but has since entered the AP Top 25 while improving to 9-0 so momentum could be building.

“People in San Antonio are really ride and die about their sports teams,” Roadrunners linebacker Rashad Wisdom said. “You see that with the Spurs and all the other teams they go hard for. As long as we keep doing what we’re doing, I know the support and how die hard that support is, it is going to continue and expand.”

UTSA’s success is generating a great buzz in San Antonio, which has translated to an increased demand in Roadrunners merchandise.

“I will say this is the worst year for the supply chain being what it is,” UTSA athletic director Lisa Campos said. “As soon as the UTSA Roadrunner sweatshirts are put out in the store, it’s definitely getting bought out really quickly. There is definitely a demand for it.”

Traylor was handing out cookies to students this week to thank them for their support and encourage them to attend Saturday’s game. He rewarded students with pizza and tacos prior to previous home games.

“He’s a people person,” Campos said. “He feeds off the energy of others. He loves being around folks and he really appreciates them, especially the students. That’s just him. He really wants to show his support.”

TURN OUT THE LIGHTS

The lights went out during Traylor’s media availability Monday, prompting the second-year coach to joke the program had missed a payment.

“We need more boosters to give more money,” Traylor said, chuckling after the lights came back on. “We’ re cutting the light bill already. We’ve got electricity problems here at the RACE (athletic facility). Donate now! Keep us afloat.”

The Roadrunners recently opened the Roadrunner Athletics Center of Excellence, a $40.4 million training facility on 10.8 acres of its campus grounds.